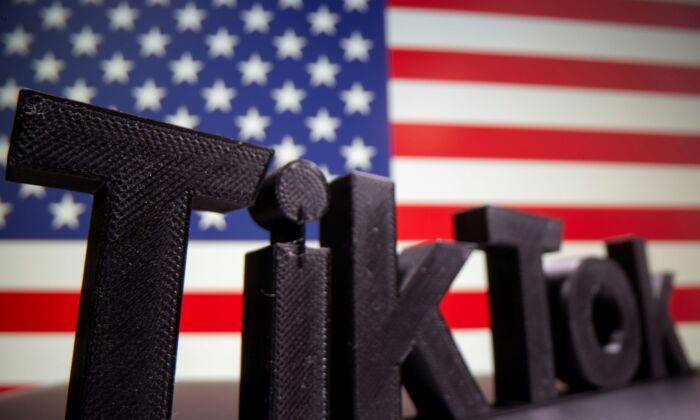 A 3D printed Tik Tok logo is seen in front of a U.S. flag in this illustration taken on Oct. 6, 2020. (Dado Ruvic/Illustration/Reuters File Photo)
US News

WASHINGTON—The White House said on Wednesday it has an ongoing review of the risks TikTok may present to U.S. data but stressed it has taken no new “proactive step” related to a pending plan for the Chinese-owned company’s American operations to be acquired by U.S. investors.

The Wall Street Journal reported earlier on Wednesday that the U.S. plan had been shelved indefinitely.

White House press secretary Jen Psaki told reporters “it is not accurate to suggest that there is a new proactive step by the Biden White House” related to TikTok, a popular social media video service.

Psaki added “there is a rigorous CFIUS process that is ongoing” referring to the Committee on Foreign Investment in the United States (CFIUS), which reviews deals by foreign acquirers for potential national security risks. She offered no timetable for its completion.

She said there is a comprehensive ongoing administration review of the “risks to U.S. data … including from TikTok, and will address them in a decisive and effective fashion.”

Reuters on Wednesday, citing two people briefed on the matter, reported that the plan unveiled in September for U.S. investors, including Oracle Corp and Walmart Inc, to buy a majority stake in TikTok’s American operations could face months of additional reviews, as the new Biden administration conducts a wide-ranging review of Trump administration China policy.

The Trump administration had contended that TikTok poses national security concerns as the personal data of U.S. users could be obtained by China’s government. TikTok, which has over 100 million users in the United States, has denied the allegation.

Three federal judges in separate rulings blocked U.S. Commerce Department orders issued under then-President Donald Trump that sought to bar new downloads of TikTok and Chinese-owned WeChat and impose restrictions that would effectively bar their use in the United States. Those rulings are on appeal before U.S. circuit courts.

A court hearing on one of the legal challenges is set for Thursday.

Many key Biden administration officials are not yet in place to review TikTok’s status. TikTok declined to comment.

Under pressure from the Trump administration, ByteDance, which owns TikTok, was in talks for months to finalize the deal with Walmart and Oracle to shift TikTok’s American assets into a new entity to address U.S. security concerns. Those talks have continued since Biden took office last month, sources said.

In early December, the Trump administration chose not to grant ByteDance a new extension of a divestiture order that Trump issued in August requiring the company to divest TikTok’s U.S. assets. That gave the Justice Department the power to enforce the divestiture order once the deadline expired.

The Justice Department has taken no action to enforce the order.