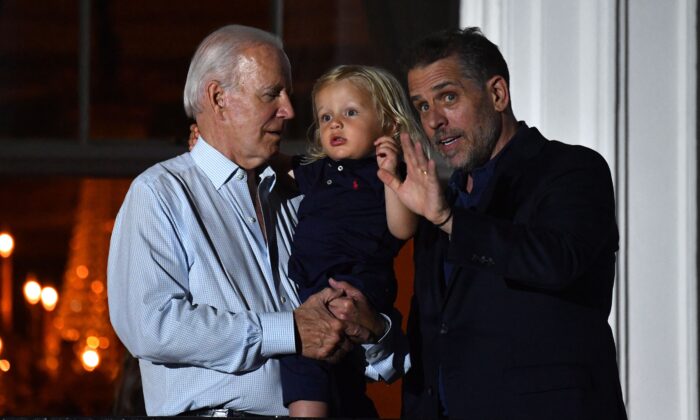 President Joe Biden (L) and son Hunter Biden (R) on a balcony of the White House to watch 4th of July fireworks in Washington on July 4, 2022. (Nicholas Kamm/AFP via Getty Images)
Executive Branch

The White House on July 5 didn’t dispute that President Joe Biden left a voicemail for his son Hunter discussing a story about the younger Biden’s business dealings with China.

The leaked voicemail, left in 2018, when Joe Biden wasn’t in office, had the Democrat telling Hunter Biden that “I think you’re clear” in the story, which was published by The New York Times.

The voicemail was recovered from a laptop computer that Hunter Biden is said to have left at a repair store in Delaware years ago. He hasn’t denied that he left the laptop there.

Materials published from the computer include images of Hunter Biden, phone calls, and text messages.

The White House was asked about the voicemail, which was released by the Daily Mail in June, for the first time on July 5.

Joe Biden has said he has never spoken with his son about his son’s business dealings, which have included transactions with individuals and entities in China, Russia, and other countries, including during the time Joe Biden was vice president.

“From this podium, I am not going to talk about alleged materials from the laptop,” Jean-Pierre added.

Pressed on whether she was disputing that Joe Biden was speaking in the voicemail, she said: “I am not going to talk about alleged materials on a laptop. It’s not happening.”

She referred reporters to Hunter Biden’s lawyer, who hasn’t responded to requests for comment, including a query sent on July 6.

It appears to show Joe Biden leaving his son a message.

“I thought the article released online, it’s going to be printed tomorrow in the Times, was good,” he said. “I think you’re clear. And anyway, if you get a chance, give me a call, I love you.”

The story in question reported that Ye and Hunter Biden met privately in mid-2017 at a hotel in Miami. During the meeting, Ye reportedly proposed a business partnership that would focus on investing in U.S. infrastructure.

The story said it remains unclear whether Hunter Biden reached a deal with Ye. But a letter later made public showed that CEFC, the Chinese entity Ye once headed, paid Hunter Biden $1 million to find an attorney for Patrick Ho, a top aide of Ye who was arrested by U.S. authorities in 2017 and sentenced for bribery and money laundering.

Republicans have vowed to renew investigations into Hunter Biden if they flip control of the House of Representatives in November’s midterm elections. The U.S. Attorney’s Office for the District of Delaware is already probing the younger Biden over his business deals, and several senators previously issued a report on the dealings.