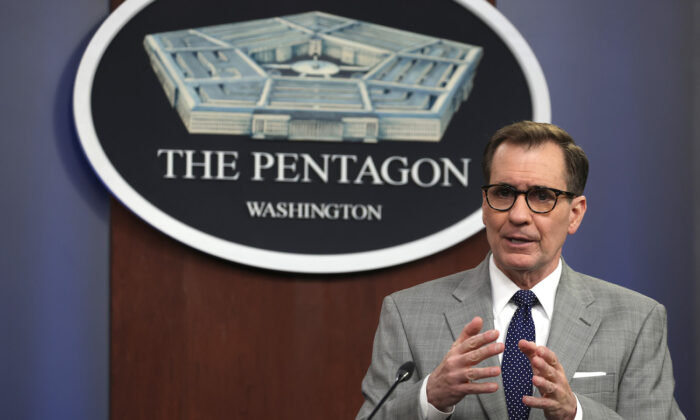 “The United States provides battlefield intelligence to help Ukraine defend their country,” Pentagon press secretary John Kirby told reporters Thursday. “We do not provide intelligence on the location of senior military leaders on the battlefield or participate in targeting decisions of the Ukrainian military.”

Earlier this week, the New York Times and other outlets reported that Ukrainian forces used American intelligence to carry out attacks that killed Russian generals and other top officials. Previously, Ukrainian officials have claimed that their military has killed around a dozen generals since the start of the conflict on Feb. 24.

The U.S. National Security Council (NSC) released a statement after the NY Times’ report, saying it is irresponsible and misleading.

“The United States provides battlefield intelligence to help the Ukrainians defend their country,” NSC spokesperson Adrienne Watson told the AFP news agency. “We do not provide intelligence with the intent to kill Russian generals.”

Meanwhile, the Kremlin also issued an angry response and said that “the Russian military is doing whatever is necessary in this situation.”

“Our military is well aware that the United States, Britain, and NATO as a whole are constantly transmitting intelligence and other parameters to the Ukrainian armed forces,” Kremlin spokesman Dmitry Peskov told reporters, according to state-run media.

Kirby also that the Kyiv government is able to combine intelligence from several sources before making decisions. He did not elaborate.

“Ukraine combines information that we and other partners provide with the intelligence that they themselves are gathering, and then they make their own decisions and they take their own actions,” he said.

It comes as Russian President Vladimir Putin told Israeli Prime Minister Naftali Bennett in a phone call on Thursday that Russia was still ready to provide safe passage for civilians from the besieged Azovstal steelworks in the Ukrainian port of Mariupol, the Kremlin said in a statement.

The statement said Putin told Bennett in a “thorough exchange of views on the situation in Ukraine” that Kyiv should order Ukrainian fighters holed up in the vast Azovstal plant to put down their weapons. Ukrainian defenders stuck at the site have clung on desperately for weeks, while some civilians have made it to safety through humanitarian corridors but others remain inside.

The Kremlin earlier denied that Russian forces were storming the plant, referring to an April 21 order from Putin that they should seal it off but not venture inside its labyrinth of underground tunnels.