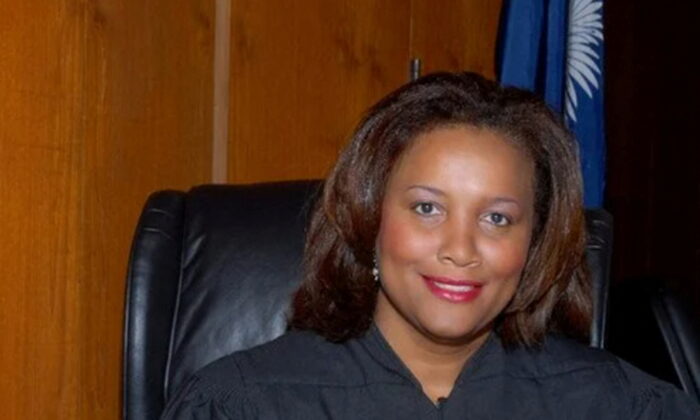 The White House has confirmed the name of one of the women being considered by President Joe Biden to fill the vacancy on the Supreme Court that will open when Justice Stephen Breyer steps down later this year.

J. Michelle Childs, currently a judge for the U.S. District Court, is on the list of candidates that Biden is considering, Andrew Bates, a White House spokesman, told media outlets in a Jan. 28 statement.

Childs was nominated to the district court by former President Barack Obama. Biden, a Democrat, nominated Childs, 55, in December 2021 to serve on the U.S. Court of Appeals for the District of Columbia Circuit. But because of the possibility that she’ll be Biden’s Supreme Court nominee, a confirmation hearing that had been scheduled before the Senate Judiciary Committee has been postponed.

“Judge Childs is among multiple individuals under consideration for the Supreme Court, and we are not going to move her nomination on the Court of Appeals while the President is considering her for this vacancy,” Bates said.

Rep. Jim Clyburn (D-S.C.), the House majority whip, said during a recent appearance on MSNBC that he thinks Childs should be the replacement for Breyer.

“She has had a fantastic career at both the state level and on the federal bench. And so, she has the experience that is needed, and she has the temperament that’s required,” he said.

Clyburn said he spoke with Biden about Childs some time ago, but not recently.

Childs told senators in the past (pdf) that she believes that judges should “act as fair and impartial arbiters, treat all litigants courteously, assess the particular facts and evidence presented in individual cases, make deliberate and well-reasoned decisions based on established legal precedent, and abide by the judicial canons and ethical standards of conduct.”

She also said she thinks that “empathy should play no role in a judge’s application of the law to the facts of a case.”

Biden has restricted his choices to black women, drawing criticism from Republicans and going against voters, a majority of whom believe that picking justices on the basis of race and gender is a bad idea. He originally pledged to nominate a black woman if a vacancy arose when he was in office while campaigning for president. The president told reporters after Breyer, 83, officially announced his plans to retire that he was sticking to his commitment.

“The person I nominate will be somebody with extraordinary qualifications, character, experience, and integrity, and that person will be the first black woman ever nominated to the United States Supreme Court,” Biden said on Jan. 27. “It’s long overdue in my opinion.”

Biden was a senator who chaired the Senate Judiciary Committee when Thomas was nominated. He attempted to derail the nomination, but was unsuccessful. Thomas, 73, still sits on the court.