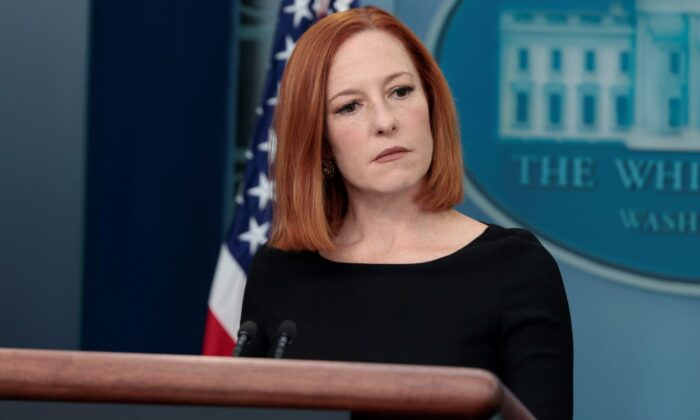 White House press secretary Jen Psaki made a plea for “peaceful” protests on Monday following a weekend of Catholic churches being vandalized, arson at an anti-abortion group’s headquarters, and pro-choice protestors marching on the homes of Supreme Court justices.

In opposition to a draft majority Supreme Court opinion to overturn Roe v. Wade leaked to the press on May 2, pro-abortion advocates protested outside the Maryland homes of Supreme Court Justices Brett Kavanaugh and John Roberts on Saturday evening.

There were also reports of multiple Catholic churches across the country being spray painted with pro-choice messaging and profanity over the weekend.

Police also said a fire was set at the headquarters of the pro-life group Wisconsin Family Action in Madison. There were also reports of vandalism at a pro-life pregnancy clinic in Oregon.

This came hours after Psaki posted to Twitter with similar messaging.

“@POTUS strongly believes in the Constitutional right to protest. But that should never include violence, threats, or vandalism. Judges perform an incredibly important function in our society, and they must be able to do their jobs without concern for their personal safety,” wrote the outgoing press secretary.

Also during the briefing, one reporter pointed to a law in the U.S. Code that explicitly prohibits protesting outside the homes of judges.

Psaki responded by saying, “We’re certainly not suggesting that anyone break any laws.”

This is somewhat of a departure from Psaki’s messaging last week, when she was asked about the addresses of Supreme Court justices being doxed publicly and said she didn’t “have an official U.S. government position on where people protest.”

“WATCH → The White House refuses to condemn radical abortion groups posting maps with private home addresses of Supreme Court Justices for protestors to find. They know this is dangerous. But they don’t care. Because it benefits their agenda. They’re going to get someone hurt.”

Republicans have also condemned the attacks on pro-life groups.