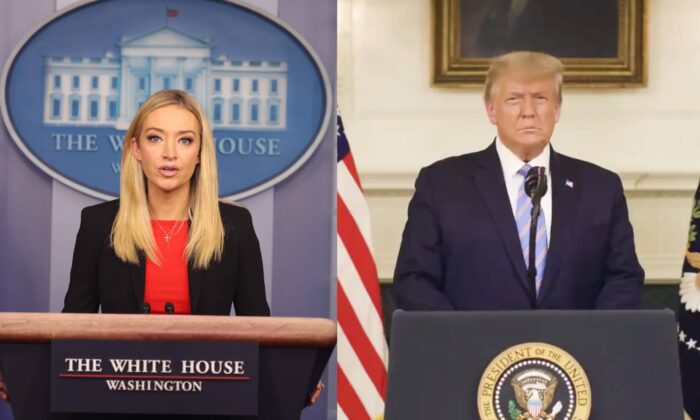 The White House on Thursday condemned the violence that took place Wednesday at the U.S. Capitol and assured the American public that there will be an “orderly transition of power.”

“The violence we saw yesterday at our nation’s capital was appalling, reprehensible, and antithetical to the American way. We condemn it, the president and this administration, in the strongest possible terms,” White House press secretary Kayleigh McEnany told a press conference. “It is unacceptable and those that broke the law should be prosecuted to the fullest extent of the law.”

Lawmakers were gathered in the U.S Capitol for a joint session of Congress to count electoral votes. Violence broke out at the building on Wednesday afternoon when a group of protesters breached the building and interrupted lawmakers who were at the time debating whether to reject Electoral College votes for Arizona.

It is unclear who instigated the breach of the Capitol building.

A total of four people were confirmed dead on Capitol grounds late Wednesday, among whom was a woman who died after being shot inside the Capitol building.

Former Vice President Joe Biden was certified as the winner of the 2020 presidential election following the vote count in the early hours of Thursday.

McEnany said Thursday afternoon that while the First Amendment guarantees the right of the people to peacefully assemble, “What we saw last night in Washington and across the country was not that.”

“Make no mistake what we saw yesterday afternoon in the halls of our capitol likewise was not that,” she again noted.

“We grieve for the loss of life and those injured and we hold them in our prayers and close to our hearts at this time,” she added. “We thank our valiant law enforcement officers who are true American heroes.”

“Now it is time for America to unite to come together to reject the violence that we have seen. We are one American people under God,” McEnany concluded and left abruptly without taking questions from reporters.

Later on Wednesday, President Donald Trump delivered a public announcement in a video, condemning the violence that took place on Capitol grounds.

“We have just been through an intense election and emotions are high. But now tempers must be cooled and calm restored,” he said.

Trump also said, “We must get on with the business of America … A new administration will be inaugurated on Jan. 20th.”