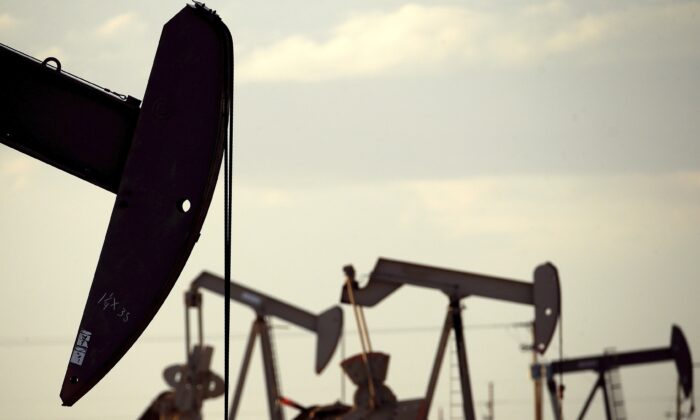 Pumpjacks work in a field in a file photo. (Charlie Riedel/AP Photo)
Politics

Wyoming Gov. Mark Gordon said the executive order that pauses new federal leases on oil and gas drilling is a “direct attack” on his state.

Last month, President Joe Biden signed an order asking the Department of the Interior to place a “pause” on new oil and gas leasing and offshore waters. The administration will also review existing leasing and permitting practices “related to fossil fuel development.”

“This Biden ban really has a devastating effect, not just for Wyoming,” Gordon told Fox News on Monday. “It’s bipartisan in its devastation.”

Gordon issued his own executive order days later saying that Biden’s action “will cause immediate and considerable harm to the state of Wyoming, including to the critical services upon which Wyoming residents depend.”

“These orders issued by the new administration are a direct attack on Wyoming and our way of life. I am directing members of my cabinet to examine the economic, financial, and workforce impacts of the President’s actions,” Gordon said in a news release at the time. “I will continue to fight these misguided and destructive policies by all means necessary. The way to move America forward is not through crushing her Western states.”

The order instructs Wyoming state agencies to examine the impacts of the ban, while also asking them to look into the impact that the order has on oil and gas employment in the state, according to the news release.

Gordon said his office, if need be, will file a lawsuit against the executive order.

“We’ll need to wait to file our suit until the (Secretary of the Interior) acts,” Gordon told lawmakers, according to the Gillette News-Record. “Once the secretary acts to implement the executive order, the state of Wyoming will file the challenge to that action, and we’ll ask the court to lift the moratorium immediately. … We expect that other states adversely affected by this moratorium might join in this litigation.”

Gordon, meanwhile, said the suit could lead to a “protracted legal fight” with the administration.

Petroleum Association of Wyoming President Pete Obermueller told a state legislative committee that the pause on new leasing on federal property is “not necessarily an immediate crisis.”

“About 80 percent of the operators in Wyoming are small and mid-size, (and) they just don’t have the capacity to have a multi-year process gathering leases and building core areas like some of our larger producers,” Obermueller said. “If (the ban) is indefinite and there’s not movement on that, you will see that the smaller and mid-size operators have a much more difficult challenge. Larger ones might be able to last for a little bit longer than that.”