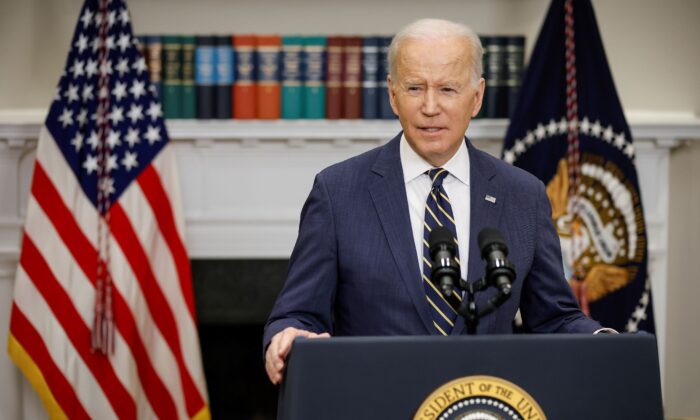 WASHINGTON—President Joe Biden will announce a new minimum tax targeting billionaires as part of his 2023 fiscal year budget on Monday, according to the White House.

The Biden administration announced the proposal on Saturday in a fact sheet ahead of the budget release, stating that the president’s plan “rewards work, not wealth.”

“President Biden’s Billionaire Minimum Income Tax will make America’s tax code fairer and reduce the deficit by about $360 billion in just the next decade,” the fact sheet stated.

As part of his 2023 budget, Biden is asking Congress to pass legislation mandating the richest American families to pay a minimum of 20 percent on all of their income, including unrealized investment income.

Biden has long advocated for higher taxes on billionaires, but this is the first time the White House is proposing a plan that directly targets billionaires. So far, Biden’s attempts to tax billionaires have failed due to opposition from Sens. Joe Manchin (D-W.Va.) and Kyrsten Sinema (D-Ariz.).

The White House document said that many millionaires and billionaires pay lower tax rates than middle-class employees because of an “imbalanced tax code.”

“In 2021 alone, America’s more than 700 billionaires saw their wealth increase by $1 trillion, yet in a typical year, billionaires like these would pay just 8 percent of their total realized and unrealized income in taxes. A firefighter or teacher can pay double that tax rate.”

Only the wealthiest 0.01 percent of American households (those worth more than $100 million) will be subject to the tax. Households earning more than $1 billion will account for over half of the revenue, according to the White House.

“It is already clear that this proposal would make the tax code more complicated and may not effectively accomplish the goal of proponents who seek to raise tax rates on those with very high net worth and incomes,” he told The Epoch Times.

“It will help us address the soaring inequality we see in this country and make the tax code fairer, more adequate, and more sustainable,” Amy Hanauer, ITEP executive director, said in a statement. “This plan offers a transformational and long-overdue change.”

The plan permits affluent families to stretch initial top-up payments on unrealized income over nine years, and then over five years on future income. Payments spread across numerous years level out year-to-year fluctuation in investment income, according to the proposal. Taxpayers with no liquidity will be able to pay later with interest.

“This approach means that the very wealthiest Americans pay taxes as they go, just like everyone else, and eliminates the inefficient sheltering of income for decades or generations,” the White House said.

According to the document, Biden’s budget plan would reduce the federal deficit by more than $1 trillion (including the $360 billion in new revenue from the “Billionaire Minimum Income Tax”) over the next decade.

“President Biden is a capitalist and believes that anyone should be able to become a millionaire or a billionaire. He also believes that it is wrong for America to have a tax code that results in America’s wealthiest households paying a lower tax rate than working families,” the fact sheet said.

The story was updated to include views from tax policy experts.