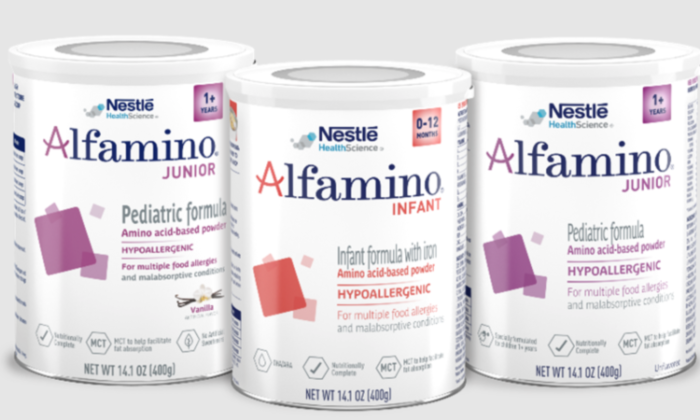 In the coming days, priority shipments of three hypoallergenic formulas for children with cow’s milk protein allergy will be transported by air as part of Operation Fly Formula.

The Nestlé formulas will be air transported from Zurich, Switzerland, to Plainfield, Indiana, via commercial aircraft contracted by the U.S. Department of Defense (DOD).

The DOD is sourcing “the equivalent of up to 1.5 million 8-ounce bottles” of Nestle formulas Alfamino® Infant, Alfamino® Junior, and Gerber Good Start® Extensive HA.

“These formulas have been prioritized because they serve a critical medical purpose and are in short supply in the United States because of the Abbott Sturgis plant closure,” the May 19 White House release stated.

President Joe Biden launched Operation Fly Formula to fast-track the import of baby formula. Under the operation, the U.S. Department of Agriculture and the Department of Health and Human Services are authorized to use DOD-contracted commercial aircraft to “pick up overseas infant formula that meets U.S. health and safety standards, so it can get to store shelves faster.”

The Biden administration has also invoked the Defense Production Act as it takes steps with the Food and Drug Administration (FDA) to reopen Abbott Nutrition’s Sturgis facility, which was shut down during an investigation into alleged bacterial contamination at the site.

The White House’s announcement comes after FDA Commissioner Robert Califf told a House committee that baby formula shortages will start to ease in the coming days. He said they had “made very significant progress” in opening the plant, which he said could be within the next “two weeks.”

This is despite Abbott saying in a release last week that it could take up to 10 weeks before products made at the reopened facility will reach shelves across the United States.

The Defense Production Act will also allow major formula manufacturers to safely import formula not currently being produced for the U.S. market.

The hospitalization of four infants, two of whom died, is alleged to have been linked to formula produced at the Sturgis facility after contracting a type of bacteria. However, Abbott said the bacteria hasn’t been detected in the formula, and there is no evidence connecting its products to illnesses in infants.

The FDA commissioner faced a grilling by lawmakers, demanding to know why the FDA didn’t act sooner to recall the product.

During the hearing, Rep. Rosa DeLauro (D-Conn.) asked the commissioner why it took “four months to pull this formula off the shelf? How many more illnesses and deaths were caused due to the FDA’s slow response?”

On May 18, the House passed emergency spending measures to address supply shortages, including $28 million in “salaries and expenses” to resolve the crisis.