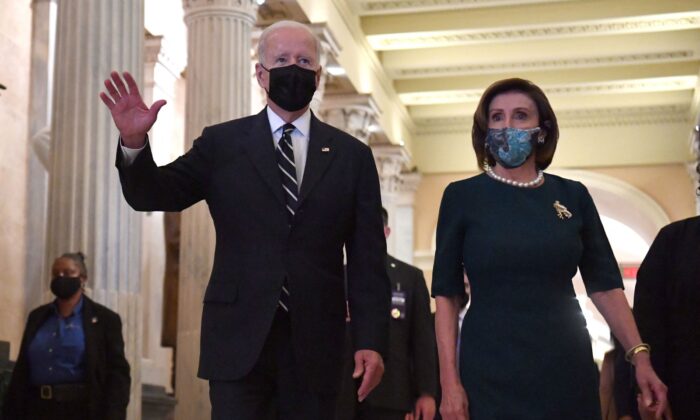 President Joe Biden and Speaker of the House Nancy Pelosi depart following a meeting with the Democratic caucus at the U.S. Capitol in Washington on Oct. 28, 2021. (Nicholas Kamm/AFP via Getty Images)
Democrats

The White House on Thursday announced that Democrats had reached a deal on the broad strokes of their multi-trillion budget reconciliation bill, resolving months of infighting among the Democratic caucus in Congress.

“After hearing input from all sides and negotiating in good faith with Senators Manchin and Sinema, Congressional Leadership, and a broad swath of Members of Congress, President Biden is announcing a framework for the Build Back Better Act,” announced President Joe Biden in an online press release.

Manchin and Sinema have long held up the legislation, citing concerns over the bill’s price and its potential to cause unintended collateral damage, to the chagrin of progressive Democrats.

Since the bill’s inception, Manchin, Sinema, and others have spoken against the laundry list of proposals from their party: incentives for clean energy, encouraging electric vehicles, carbon taxes, expansion of the government’s role in health care, increasing tax rates, and a measure to let the IRS snoop into Americans’ bank accounts, among others.

These squabbles pushed the bill far off schedule, but the new agreement gives a glimmer of hope to supporters of the bill.

In his release, Biden touched on the main highlights of the new, smaller bill.

According to the White House, these will offset the price of the bill by more than 100 percent, with estimated new revenue of up to $1.995 trillion.

“For too long, the economy has worked great for those at the top, while working families continually get squeezed,” the White House wrote. “President Biden promised to rebuild the backbone of the country—the middle class—so that this time everyone comes along.”

The White House said that Biden “is confident this is a framework that can pass both houses of Congress.”

The bill devotes over a quarter of its funding to new climate initiatives, despite Manchin’s stated opposition to several climate policies proposed by his party. Tax policies in the final cut of the bill have been criticized by both Manchin and Sinema, indicating that the two relented and allowed these new measures as a compromise.

Absent from the bill is paid family leave, a keystone of the bill for progressives like Sen. Bernie Sanders (I-Vt.) and Rep. Alexandria Ocasio-Cortez (D-N.Y.).

Also absent is a proposed IRS snooping scheme that would have allowed the IRS to gather information on Americans’ bank transactions; Manchin has spoken out strongly against this measure in the past.

Despite Biden’s optimism, Sen. Dick Durbin (D-Ill.) painted a less rosy picture. “There’s a great deal of uncertainty within the caucus as to what’s contained in the deal,” Durbin told reporters.

In the House, Rep. Pramila Jayapal (D-Wash.), chair of the 96-strong Congressional Progressive Caucus, also indicated uncertainty over the bill. “What we said consistently is that we want to see what’s actually in the bill. We want to see the legislative text. And then we’re, you know, assuming that we’re fine with that we’ll vote both bills through at the same time.”

Even though Manchin and Sinema are seemingly satisfied with this new deal, it remains to be seen whether it can win much-needed support from progressives.