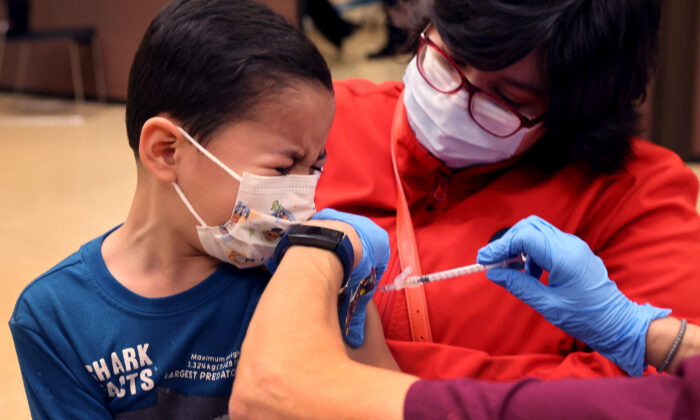 About 2.6 million kids—10 percent of those aged 5 to 11—have received their first dose of the COVID-19 vaccine, the White House said Wednesday.

Jeff Zients, the White House coronavirus response coordinator, announced the news during a press conference, saying 1.7 million of them received their first shot last week only.

Zients said there are now 30,000 locations across the nation for kids to get a shot, and the pace is expected to pick up in the coming days.

It’s been less than three weeks since the Pfizer vaccine was authorized to be administered to children 5 through 11.

On Oct. 29, the Food and Drug Administration (FDA) issued and emergency use authorization to allow Pfizer’s COVID-19 vaccine to be used in children aged 5 through 11, three days after its advisory panel recommended it.

On Nov. 2, the Centers for Disease Control and Prevention also recommended such use.

Children “can be infected, just like they can get the common cold, but they’re not a big threat. They don’t die from this, except in very rare circumstances. So if you want to talk about protecting children or keeping children safe, I think we can talk about traffic accidents, for example, which they are really at some risk,” Harvard University professor of medicine Martin Kulldorff told EpochTV’s “American Thought Leaders” last month.

The federal public health agencies and officials have insisted that the benefits of COVID-19 vaccines outweigh the risks, saying the severe side effects are rare.

“We know millions of parents are eager to get their children vaccinated and with this decision, we now have recommended that about 28 million children receive a COVID-19 vaccine,” CDC Director Rochelle Walensky said in a statement when the CDC recommended the use for kids 5–11. “As a mom, I encourage parents with questions to talk to their pediatrician, school nurse, or local pharmacist to learn more about the vaccine and the importance of getting their children vaccinated.”

On Oct. 29, the same day the FDA issued emergency use authorization for the pediatric Pfizer vaccine, Gallop released a poll showing 55 percent of parents of children younger than 12 would plan to have their child receive it, while 45 percent would not. Gallop said the figures have not changed since May.

Zients also announced Wednesday that the White House plans to invest billions of dollars to expand vaccine manufacturing capacity, aiming to produce at least one billion doses a year from the second half of 2022.