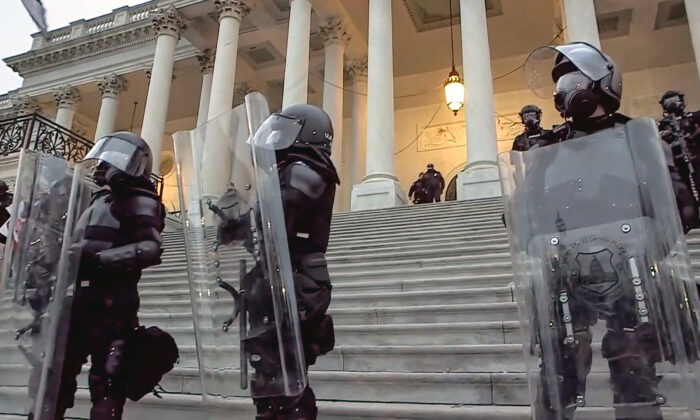 U.S. Capitol Police guard the steps leading to the Columbus Doors and the Capitol Rotunda on January 6, 2021. (U.S. DOJ/Screenshot via The Epoch Times)
Jan. 6 Coverage

Several U.S. Capitol Police whistleblowers have exposed what they call intelligence failures leading up to the events of Jan. 6, 2021, and problems in the law enforcement agency’s command structure, an Illinois congressman said.

Rep. Rodney Davis (R-Ill.), the ranking member of the Committee on House Administration, said whistleblower testimony speaks directly to the need to reform the $460 million police agency with some 2,300 employees.

“We have heard from several whistleblowers within USCP who fear retribution, and we take seriously the need to protect their identities,” Davis told The Epoch Times in a statement. “Many have brought to light issues with the command-and-control structure of USCP, including the Capitol Police Board.”

News of the USCP whistleblowers came shortly after an email surfaced from a former USCP intelligence analyst to senior staff at the agency. The memo by Eric Hoar, dated Jan. 9, 2021, blasted the USCP for failure to share information on threats from groups that talked about attacking the Capitol on January 6.

“We analysts have been reporting for weeks that patriot groups are commenting on social media their intentions to storm the U.S. Capitol with overwhelming numbers,” Hoar wrote in the email, disclosed by John Solomon at Just the News.

“I don’t know what was occurring behind the scenes, but I hope that information was briefed with the veracity it deserved and not just a one-time event assessment,” wrote Hoar, who was assigned to the USCP Intelligence and Inter-Agency Coordination Division. He has since left Capitol Police.

Solomon’s report said in the two weeks leading up to January 6, USCP received “detailed warnings from the FBI, Homeland Security Department, the U.S. Marshals Service and D.C. Metropolitan Police that right-wing extremists were plotting to storm the Capitol and attack lawmakers.”

Hoar said he hoped his memo would “provide insight to help prevent another disaster.”

“The notion that valid intelligence is trumped by optics or political decisions is unacceptable and puts lives in danger,” he wrote.

Hoar’s concerns (pdf) were not reflected in the information shared in a Jan. 5, 2021, memo (pdf) from the USCP’s Civil Disturbance Unit (CDU). Titled, “CDU Operational Plan,” the document’s threat analysis reads, “At this time there are no specific known threats related to the Joint Session of Congress – Electoral College Vote Certification.”

The CDU plan said if violence occurred on Jan. 6, the plan was to use the FN-303 anti-riot gun along with the PepperBall launcher system, which deploys powdered chemical irritants. Kinetic impact projectiles “will not be fired indiscriminately into crowds,” the memo said.

Numerous protesters were injured on January 6 when flashbangs, dispersion grenades, and other explosive devices were fired and tossed into the tightly packed crowds on the west side of the Capitol. The heavy use of munitions was chronicled in The Epoch Times documentary, “The Real Story of Jan. 6.”

About 140 police officers from USCP and the Metropolitan Police Department were injured on January 6.

Davis said Congress needs to intervene to stem what he called the politicization of law enforcement on Capitol Hill.

“It has become increasingly clear that security decisions within the Capitol complex have become highly politicized and we must work to end that,” he told The Epoch Times. “A good starting place is my Capitol Police Advancement Act—which I introduced before 1/6—that will increase transparency and clarify authorities.”

Drafted in July 2020, the legislation (pdf) would require USCP to produce semi-annual reports and collect law enforcement statistics that are in line with other federal agencies.

The USCP Inspector General would have an independent budget, and Inspector General reports would be made public just as they are in executive-branch agencies and other organizations such as the Government Accountability Office, the Architect of the Capitol, and the Library of Congress, the bill says.

Davis said employees who come forward to report problems at USCP should not face recriminations.

“We need to do a better job of making sure that we care less about punishing our officers who are just trying to make sure a January 6 never happens again than we are about fixing the problems that led to the security failures before and on January 6th,” Davis said on a broadcast of “Just the News, Not Noise.”

The Epoch Times reached out to U.S. Capitol Police for comment but did not receive a response by press time.