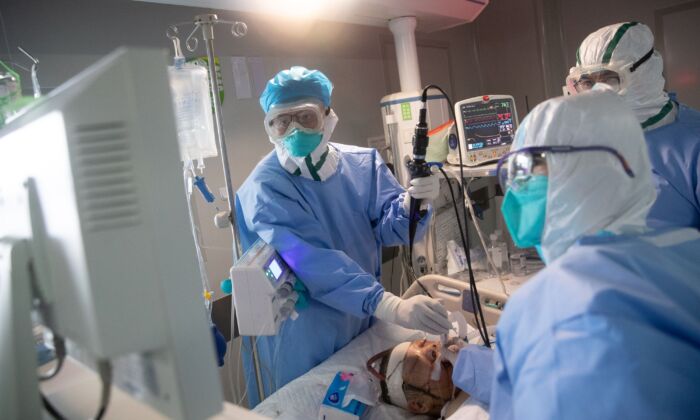 For the first time since the virus outbreak began, China’s national health commission claimed on March 19 that there were no new infections in the entire country.

In Wuhan, ground zero of the epidemic, residents witnessed long lines at hospitals while more facilities were reportedly being set up to accommodate ill patients.

The CCP virus, commonly known as the novel coronavirus, first emerged in Wuhan in December 2019.

In a video posted to social media on March 19, a Chinese citizen shows the Wuhan Union Hospital, one of 46 designated facilities to treat COVID-19, and the queue in front of it. “Look, Look! People are lining up in front of the fever clinic at Wuhan Union Hospital,” the person says. The Epoch Times confirmed the footage was filmed at the hospital.

More than 30 people are seen waiting in line, keeping a safe distance from the person in front of them. A hospital security guard is stationed nearby, dressed in a protective suit and wearing an N95 mask.

Those waiting in line wore masks, some dressed in surgical gowns or plastic raincoats—worn by many during the initial outbreak as people sought to protect themselves from contracting the virus.

Meanwhile, Mr. Wu, a resident in nearby Huanggang city, cried for help. He said no hospital in Huanggang or Wuhan could diagnose his disease because all the facilities he visited were full of virus patients.

Wu’s daughter told The Epoch Times in a phone interview: “I called doctors from Wuhan. They said it’s very possible that my father has a kidney tumor, but they couldn’t accept him. … Their hospitals are full of [virus] patients.”

On March 19, a construction worker shared a video of a new makeshift hospital set up within a stadium in suburban Wuhan.

“After another night, our mission is almost complete,” the man said. “A new makeshift hospital will be in operation soon.”

Ms. Li, a resident in Wuhan, told The Epoch Times that authorities have recently set up so-called relay stations around the city. Typically set up inside universities, diagnosed virus patients are being held there in quarantine.

“After the 14 makeshift hospitals were closed [on March 10], they set up 300 relay stations. I believe they are like a new type of makeshift facility,” Li said.

Coinciding with Chinese leader Xi Jinping’s first visit to Wuhan since the outbreak, authorities closed down the makeshift field hospitals, saying there was no longer a need for them.

Ms. Li also said many people are undiagnosed and self-isolating at home. “[From what I know], each residential compound in [Jiang’an district, an area of Wuhan] has infected virus patients. The patients are forced to stay at home.”

Ms. Zhang, another Wuhan resident, believed the epidemic was much more severe than authorities are admitting.

“If the outbreak isn’t critical, it [the government] would allow us to return to work. Now all roads are still blocked, and businesses have not resumed production in Wuhan,” Zhang said in a March 17 phone interview.

Since late January, Wuhan has been under lockdown. To prevent the virus from spreading, workplaces were closed down, public transportation and road travel banned, and public events canceled.

Aside from Xinjiang and Guizhou, two remote areas of China that recently reopened high schools and middle schools for seniors who will take entrance exams, all schools in other provinces and regions are closed.

Many netizens are skeptical of the authorities’ claims that the epidemic has been contained. One widely circulated article posted onto a Chinese internet bulletin board said that only when three criteria are met will it indicate that the epidemic is truly over.

The three criteria are: all schools in China reopen; North Korea and Russia reopen their borders to China; and the CCP holds its Lianghui (“Two Sessions”), the Party’s annual conference for its rubber-stamp legislature and the advisory body, the Chinese People’s Political Consultative Conference.

This year’s Lianghui was scheduled for March 3 to March 15. On Feb. 24, the Party announced that it would be postponed due to the epidemic.