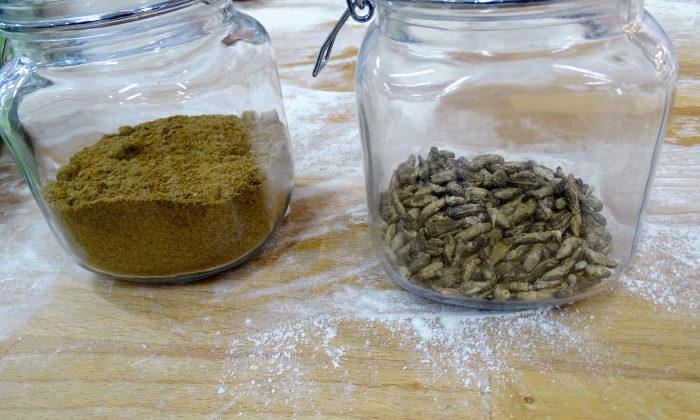 Flour ground from dried crickets and crickets in jars, in Helsinki, Finland, on Nov. 23, 2017. (Attila Cser/Reuters)
US

Whether roasted, dried, dipped in chocolate, or tossed into a smoothie, edible insects remain a tough sell for die-hard meat-lovers in Western countries.

Slowly but steadily, however, food products containing insect ingredients are finding their way onto supermarket shelves and online stores.

“We do see an increase [in sales], and that’s due to educating people,” said Monica Martinez, founder, and CEO of Don Bugito, a maker of insect snacks in San Mateo, California.

Martinez said she started the business in 2011 to create a more sustainable source of alternative protein for a healthier planet.

Today, her small business operates with six employees and serves a growing base of 500 customers through her physical store and online sales.

Martinez said Don Bugito’s clientele has grown considerably since she started as one of the first edible cricket companies in the United States. Her customers tend to be young and environmentally conscious.

She said 10 years ago most Americans had no idea they could eat insects and enjoy the experience. While an estimated 2 billion people in Asia and Africa consume insects daily, change in culinary patterns comes slowly to Western countries, Martinez said.

Eating Bugs to ‘Save the Planet’

“There’s been a lot of gain [in popularity], but I won’t say the market is booming because it’s not. The majority of the public don’t care about what sustainability means or what climate change means,” Martinez said.

In February 2021, Time magazine ran an article on how humans eating insects would “save the planet.”

In a 2018 article titled “Good grub: why we might be eating insects soon,” the WEF predicted that billions of people would eat “creepy crawlies” regularly.

According to the WEF, market analyst Meticulous Research projected that the global market for edible insects could triple to $1.18 billion by 2023.

At Euroccrickets, a cricket flour producer based in Lithuania, spokeswoman Kristina Macianskyte said that despite crickets’ nutritional and energy benefits, raising edible crickets has a very short production cycle compared with other protein sources.

“In just over a month’s time, we can grow a batch of a raw material that is extremely valuable in terms of its nutritional value,” Macianskyte said. “And the resulting raw material is 100 percent consumed.”

“We consumed 100 percent of what we create. And it’s all-natural.”

From a nutritional perspective, cricket flour is extremely rich in protein (about 65 percent), and contains essential trace elements, vitamins A, B12, D3 and fatty acids, Macianskyte told The Epoch Times.

In Canada, elementary schools have gradually introduced pupils to edible insects like flavored “cricket chips” to overcome their cultural aversion to eating insects.

Crickets also come in the form  of “Chocolate Chirp Cookies” at Hoppy Planet Foods. Then there’s Judee’s Confidence From Scratch, established in 2009, which sells gluten-free cricket flour that customers can use with shakes, smoothies, or salad dressings, for an “extra source of protein.”

The company also sells edible cricket powder, asking consumers, “Do you find it hard to eat a bug? Cricket powder is the answer.”

However, the notion that insects will be prominent in the global food pyramid could still be a ways off.

“The habit of consumerism certainly does not change in a day,” Macianskyte said.

“However, it is certainly likely that, just as shrimps and other seafood once supplemented the diet of all of us, so too will the insect find its place in our kitchens, not only adding to our healthy diets, but also conserving nature and its resources.”

“My take is some of them are innovative and trendy and think they’ll make money. In most companies we see, a lot of young people jump in and think they’re going to fix the world,” Martinez said.

Many drop out when they realize it’s a dog-eat-dog economy in many ways.

“One of the challenges we faced was it’s expensive” to produce food made with edible insects, Martinez added.

Like Eurocrcrickets, Martinez sees edible insects as an a supplemental food source, and not a replacement for traditional protein like beef and poultry.

“It will never replace it unless there’s a global catastrophe. I don’t think people will stop eating beef or conventional proteins.”