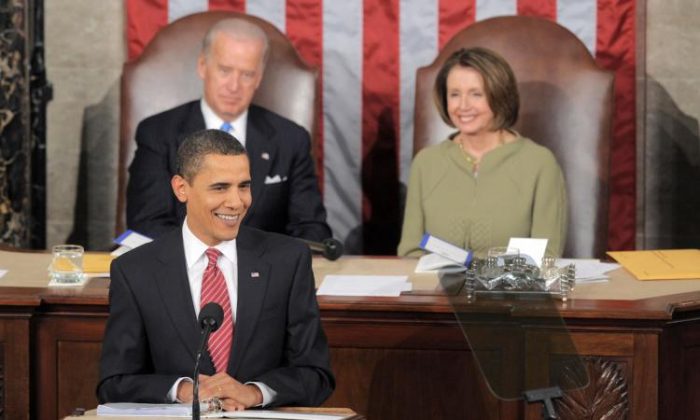 US President Barack Obama, flanked by US Vice President Joe Biden and Speaker of the House Nancy Pelosi, addresses a Joint Session of Congress at the Capitol in Washington on Feb. 24, 2009. (Saul Loeb/AFP/Getty Images)
Viewpoints

Where Was the Love for Whistleblowers During Obama Administration?

House Speaker Nancy Pelosi (D-Calif.) recently put President Donald Trump on notice about any possible retaliation against the whistleblower who filed a complaint against Trump, warning: “I will make sure he does not intimidate the whistleblower. I was there. I told the President, you’re in my wheelhouse when you come after the whistleblower.”

But where was this love for whistleblowers during President Barack Obama’s administration? Obama remains enormously popular among Democrats. But many in the how-dare-President-Trump-attack-a-whistleblower camp paid little attention to Obama’s unprecedented attack on whistleblowers, as well as on the journalists who reported on their whistleblowing.

Liberal filmmaker Robert Greenwald released a documentary in 2013 called “War on Whistleblowers: Free Press and the National Security State” that examined the fate of four whistleblowers during the Obama administration.

In a 2011 article titled “Obama’s War on Whistle-blowers,” the center-left publication The Atlantic wrote: “The Justice Department’s subpoena of New York Times reporter James Risen … was the latest sign of how aggressive the Obama administration is being in its campaign against government whistle-blowers. The purpose of Risen’s subpoena is to force him to testify that Jeffrey Sterling, a former CIA agent, gave him confidential information about the CIA’s efforts to sabotage Iran’s nuclear program. The extent to which the administration is prosecuting leakers has troubled those who see leakers as speakers of truth to power. ‘In President Obama’s 26 months in office, civilian and military prosecutors have charged five people in cases involving leaking information, more than all previous presidents combined,’ reports the Times.”

Similarly, in 2011, left-wing magazine The New Yorker wrote: “When President Barack Obama took office, in 2009, he championed the cause of government transparency, and spoke admiringly of whistle-blowers, whom he described as ‘often the best source of information about waste, fraud, and abuse in government.’ But the Obama Administration has pursued leak prosecutions with a surprising relentlessness. … It has been using the Espionage Act to press criminal charges in five alleged instances of national-security leaks—more such prosecutions than have occurred in all previous Administrations combined.”

Alex Gibney is a left-wing filmmaker described by the left-wing magazine Esquire as “the most important documentarian of our time.” He directed the documentary “We Steal Secrets: The Story of WikiLeaks.”

As to Obama’s treatment of whistleblowers and journalists who report their disclosures, Gibney said: “Let’s be honest and say that the Obama administration is the most aggressive prosecutor of leaks in American history. And they’re going after leakers and, in a collateral way, after journalists, in a way that is more aggressive than anything that has ever been seen in our history.”

About Drake’s prosecution, Daniel Ellsberg, the man who leaked the Pentagon Papers during Nixon administration said: “For Obama to indict and prosecute Drake now, for acts undertaken and investigated during the Bush administration, is to do precisely what Obama said he did not mean to do — ‘look backward.’ Of all the blatantly criminal acts committed under Bush, warrantless wiretapping by the NSA, aggression, torture, Obama now prosecutes only the revelation of massive waste by the NSA, a socially useful act which the Bush administration itself investigated but did not choose to indict or prosecute!

“Bush brought no indictments against whistleblowers, though he suspended Drake’s clearance. Obama, in this and other matters relating to secrecy and whistleblowing, is doing worse than Bush. His violation of civil liberties and the White House’s excessive use of the executive secrecy privilege is inexcusable.”

The Obama administration, according to The Washington Post, obtained a warrant to search phone records of Fox reporter James Rosen, who published sensitive information about North Korea.

The Post reported in 2013: “They (the Justice Department) used security badge access records to track the reporter’s comings and goings from the State Department, according to a newly obtained court affidavit. They traced the timing of his calls with a State Department security adviser suspected of sharing the classified report. They obtained a search warrant for the reporter’s personal e-mails.”

Take comfort knowing that Democrats such as Pelosi and their media sympathizers, after taking time off for eight years, think so highly of whistleblowers, especially when they whistleblow on Trump.