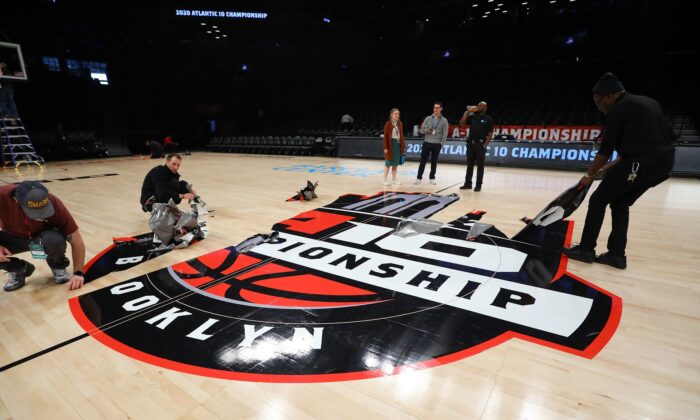 The court is dismantled following the announcement that the 2020 Atlantic 10 Men's Basketball Tournament has been cancelled due to the Wuhan Virus in the Brooklyn Borough of New York City on March 12, 2020. (Mike Stobe/Getty Images)
Viewpoints

When Wuhan Virus Departs, World Will Be Changed

No one knows how long the international alarm, bordering on panic, over the Wuhan virus will last.

Whether it turns out to be the dire event some fear, or just a bad sort of virus that opportunistically kills the elderly and those with compromised immune systems (which is what, at this writing, it seems to be), one thing is certain: When it finally runs its course, a whole lot of things are going to be very, very different.

That’s not necessarily a bad thing; after all, it’s an ill wind that blows nobody any good. For more than half a century, the Western world has divided itself into two antithetical camps. One constantly pushes for the overthrow of years, decades, centuries, and even millennia of societal traditions and political norms in a headlong pursuit of “change” at all costs, while the other has tried to resist, but has inexorably been pushed back on nearly every front, shedding religious tenets and constitutional rights in a doomed bid to appease its opponents.

The situation resembles the parable of Chesterton’s Fence, in which two men encounter a mysterious barrier across a road: “The more modern type of reformer goes gaily up to it and says, ‘I don’t see the use of this; let us clear it away.’ To which the more intelligent type of reformer will do well to answer: ‘If you don’t see the use of it, I certainly won’t let you clear it away. Go away and think. Then, when you can come back and tell me that you do see the use of it, I may allow you to destroy it.’”

Problem is, the left went ahead and destroyed the fence anyway. And with the arrival of the coronavirus, we now see the results. Herewith, a list of the biggest Wuhan losers:

The European Union. The EU’s pipe dream of a superstate, passport-free in its interior, could only work as long as all the disparate countries herded within shared the same cultural values. But Germany—surprise!—turned out to be nothing like Greece or Italy, while Britain and Ireland bore only a passing resemblance to Belgium and France.

Further, differing economies, marked by vastly different work ethics, made the marriage of currencies such as the Deutschmark and the drachma effectively impossible. The unwieldy union, originally designed to keep France and Germany from each other’s throats, was always shaky, but two things have now happened to knock it off its pins: German Chancellor Angela Merkel’s destabilizing decision to admit more than a million non-European immigrants from the Middle East and Afghanistan in 2015, giving them free access to the rest of the EU, triggering social destabilization from Lampedusa to Stockholm, and partially setting off the UK’s “Brexit” and the Wuhan virus.

With Italy and Spain now bearing the brunt of COVID-19, one member state after another has turned its back on the EU charter, and battened down the hatches against foreigners, including fellow Europeans; sympathy for Syrians and Afghans has had to take a back seat as grandma expires painfully in the back bedroom.

Even Germany has had enough and has closed its border to many of its immediate neighbors, while the Schengen Zone, in which citizens of member states (not all of them in the EU) could travel freely, is now “verboten” to outsiders. So say “auf Wiedersehen” to the European Union as we knew it as the Europeans remember the joys and protective uses of nationalism, and those more interested in national survival than the Brussels pipe dream follow Britain out the door. All of which means the effective end of—

Open borders. Across the Atlantic, the United States has been under pressure from the Democrats to render the southern border with Mexico effectively nugatory, blocking President Donald Trump’s wall at every turn in the courts, ignoring federal authority regarding immigration, and doing their best to prevent Immigration and Customs Enforcement (ICE) from arresting and deporting criminal illegal aliens.

Just a few days ago, presumptive Democratic nominee Joe Biden was calling Trump’s handling of the Wuhan virus crisis “xenophobic.” But now that the virus has shut down commerce and travel from New York to California, Americans are less tolerant of law-flouting than they were a month ago. That old folks should be confined to quarters for up to four months while the homeless turn the sidewalks into open-air latrines, Hollywood, the lifeblood of Los Angeles, essentially shuts down production, and movie theaters across the nation close. As 30,000 illegals continue to cross the southwest border per month, open borders have suddenly become a luxury even a liberal can no longer afford. Meanwhile, across the Pacific—

China is now seen as more of a threat than a trading partner, and will never again have the same economic and political relationship with the West; its hegemonic aspirations are now over, and it will likely return to being a non-expansive regional power.

Forget the conspiracy-mongering notion that the Wuhan virus was deliberately weaponized by the Chinese government; what’s bad enough is that Beijing deliberately concealed the outbreak for as long as it did and has been dissembling ever since.

The coronavirus has also put the spotlight on the Peoples Republic of China’s (PRC) outsized influence in the United States, including its penetration of U.S. colleges and universities to implant or suborn professors to steal research and technology, and agents masquerading as students who were actually officers in the People’s Liberation Army.

Dependence on China for, among other things, prescription drugs and medical devices, is now a thing of the past, especially after a Chinese threat to withhold life-saving pharmaceuticals. And extensive Chinese investment in places such as northern Italy (where the worst of the European outbreak has occurred, thanks to PRC control of the Italian textile industry) is undergoing immediate reassessment. As is—

“Climate change.” The massive scheme to separate rich nations from their money and their standard of living has faded from the headlines as Greta Thunberg relinquishes her media-fueled role as a seer and resumes her life as an obscure Swedish teenager.

The urgency of keeping the rise in the planet’s temperature to less than 2 degrees’ Celsius matters little when your own body temperature is soaring to 103 degrees Fahrenheit and ICUs are filled to capacity. An enormous industry of global-warming alarmists and rent-seekers is going to have to make do with less fools’ gold as rational countries redirect critical resources to infectious-disease care and prevention.

Besides, the coronavirus cannot thrive in warm and humid climates, so maybe a heatwave is just what the doctor ordered. After all, we’re all in this together, right? It’s just that—

Globalism and “free trade” are on the way out. The Wuhan virus means the end of cheap, even slave, labor and thus of inexpensive electronic goods at the low end and overpriced gadgets (such as the iPhone and Nikes) at the high end, with huge markups that gouge consumers even as Asian labor gets shortchanged and U.S. workers get sent to the unemployment offices.

One of the cornerstones of the left-right consensus, and an unholy alliance between the U.S. Chamber of Commerce and outfits such as La Raza, globalism (along with open borders) has enriched the few at the expense of the many and beggared everybody else. Look for “American made” to mean something again. And, speaking of beggaring—

The IRS and the income tax is an institution whose time has gone. A product of the so-called progressive era, the income tax was forced upon the U.S. public with the adoption of the 16th Amendment in 1913, which overturned the constitutional mandate that direct taxes had to be apportioned among the states.

The result was a diminution of Americans’ personal freedom, a massive expansion of the federal government, and a soaring national debt, now completely out of control. To fight the economic effects of the Wuhan virus, however, the administration is bruiting an immediate cash benefit of up to $1,000 to every American, an amnesty without penalties in the late filing of federal income taxes, as well as a “payroll tax” (FICA) holiday, proving that while death may be inevitable, taxes are not.

Other things likely to change include college and professional sports (seasons delayed or canceled), the summer Olympics (sayonara, Tokyo), public transportation (the private automobile turns out to be the perfect social-distancing vehicle, not buses or subways), the Democrats (after wasting three years indulging their “Russian collusion” hoax and conducting a sham impeachment, nobody cares which of the two anti-America geezers the party is going to run this fall, and at least one Democratic primary, in Ohio, has already been postponed), animal rights (testing experimental vaccines on lab animals?—bring it on!), and rule by judges (as governors and the feds impose emergency measures that override state and local statutes in the interests of public safety).

Indeed, one of the happiest results of the virus crisis will be the end of “nationwide injunctions” from the last and least of the three constitutional branches of government, which can now return (in Chief Justice John Roberts’ formulation) to calling balls and strikes, and staying out of policy.

Hardest hit of all, however, is the media, whose anti-Trump mania, reliance on manipulative if not imaginary “anonymous sources,” eagerness to be seduced by former members of the intelligence community, general ignorance of almost every specialized field they encounter, political naiveté, and absolute fidelity to the party line (“Wuhan” is now racist) has rendered a once-proud profession little more than a mouthpiece for the Democratic National Committee and a constant reproach to truth, justice, and the American way.

At a time of dying newspapers and laid-off reporters, the media has chosen to go down with its “principles,” rather than adhering to its former standards of objectivity and professionalism. They wanted “change” and now they’ve got it—as H.L. Mencken famously said: good and hard.

Maybe the next time we come to a fence, we’ll think twice about tearing it down.