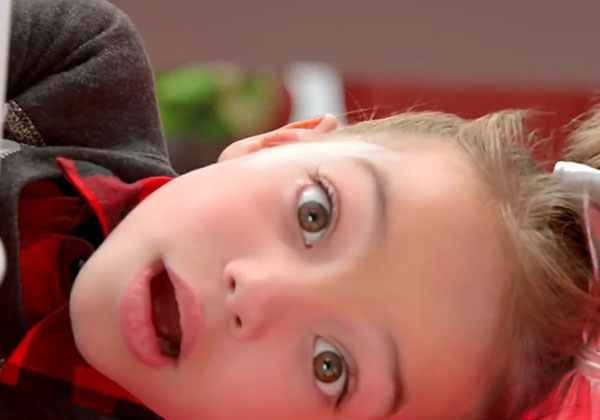 I KNOW SHE’S GOT A NAME, but I felt “WhatzerFace” would suffice quite well enough until I found out who she was. You know who I’m talking about… and  you don’t know her name either.  But if you’re like me, you’re left absolutely charmed and mesmerized by “WhatzerFace’s” romp through Marshmallow Land on the popular Alice In Marshmallow Land television advertisement by Target.

The Target holiday advertisement features an adorable little girl chaperoned by Target’s esteemed, long-time mascot Bullseye. I see this commercial every morning while getting dressed and I just can’t manage to tear myself away from watching it.  This advertisement never fails to stop me in my tracks.  If I’m putting on nylons, brushing my hair, putting on mascara, ironing a dress, brushing my teeth.  Little “WhatzerFace” and that enchanting Marshmallow World theme song holds me captive for a full 43 seconds (the short version) and there’s simply nothing I can do about it.  I cannot turn away. As if magnetized, this holiday advertisement has its way with me.

It is not just little “WhatzerFace” that captures me.  The whimsical holiday song is a Christmas classic that was written in 1949 by Carl Sigman (lyrics) and Peter DeRose (music), and first made famous by legendary crooner Bing Crosby in 1951, and later by Dean Martin. But the 2014 jingle brought to you by Target is sung by alternative rock singer Karen O. from the band Yeah Yeah, Yeahs. I’m just as much drawn to the commercial by Karen O’s fanciful voice as I am to little “WhatzerFace” and her whimsical misadventures through Marshmallow Land.

The advertisement is called Alice In Marshmallow Land, and was fashioned via the ad execs at  72 and Sunny Advertising Agency.   “WhatzerFace” as Alice is goaded by the barking of Target’s endearing  Bull Terrier mascot Bullseye, to enter the red bullseye hole of the Target logo.  She acquiesces and disappears into the hole, reappearing on the other side of it via a slide.  Her fall is broken by a bevy of fluffy white marshmallows.

From there Alice finds that she is in a room full of of her favorite toys who are all dining together at a long table. This includes Barbie and a Teenage Mutant Ninja Turtle.  Alice then picks up a marshmallow and puts it in her mouth, and suddenly shrinks down to their size.  Now she is able to merrily join them at the table!  But she is goaded away once again by Bullseye the dog, who leads her down the path of a winter wonderland.  She then sees a lovely red and white gift-wrapped box, but she is stopped in her path because the box is being guarded between the legs of a mammoth and menacing green dinosaur toy who growls at her and startles her.  What can she do!?  The resilient, and quick-witted Alice picks up a marshmallow and throws it into the mouth of the dinosaur who immediately shrinks down to the size of a small toy. Alice is happy, vibrant and always triumphant in her adventures and misadventures through Marshmallow Land via the marshmallows.

The advertisement closes with Alice opening the gift box, which yields to a shot of Bullseye barking at Alice as she has fallen asleep with her head down on a dining table next to a marshmallow.  Her eyes open and she smiles, realizing that her romp through Marshmallow Land was only a pleasant dream.

Between the whimsy of the song and the appeal of little “WhatzerFace” – you can’t help but adore this commercial.  Surely the 72 and Sunny Advertising Agency has hit the jackpot with this one.

Below are the lyrics to It’s a Marshmallow World, as sung by Karen O.:

It’s a marshmallow world in the winterWhen the snow comes to cover the groundIt’s the time for play, it’s a whipped cream dayI wait for it the whole year round
In Winter, it’s a marshmallow World!!!

After two weeks of being drawn in by this advertisement, I finally took the time today to find out more about this commercial and who this lovely little “WhatzerFace” was.  Her name is Tatum Bailey.  She is a 6-year-old who hails out of Santa Ana, California and she is excited to be flying into New York City this week.   She has never been on a plane before and has never been to Manhattan.  Little Tatum will be ringing the opening bell at The New York Stock Exchange on Black Friday  for the Annual Children’s Day.  Tatum will ring the bell at 9:30 Eastern time.  The bell ringing can be seen on CNN Headline News.  She is also excited about seeing the Macy’s Thanksgiving Day Parade.  She notes that her favorite part of filming the Target commercial was being with Bullseye the dog.

Her father, Bryce Bailey, also has three other children who have acted from time to time, but I doubt that Tatum’s romp on the Target television ad will limit her to a mere fifteen minutes of fame… or let’s hope not.  I’m looking forward to seeing more of her.  She is clearly a natural in front of the camera, stealing the hearts of millions as little Alice In Marshmallow Land.  I’m going to miss her when these ads stop running.