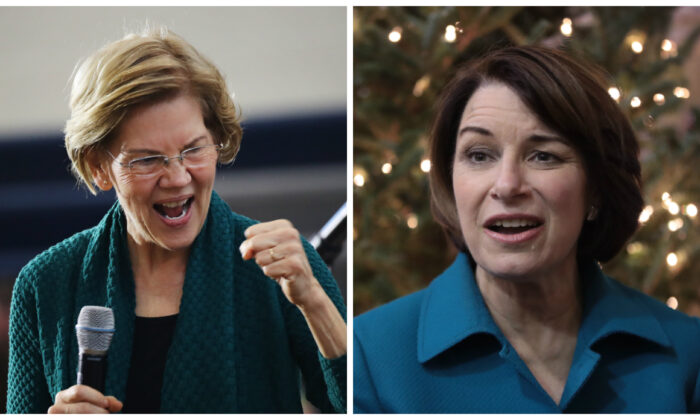 Save a few “bitter clingers,” these days most people pay next to no attention to which candidate newspapers endorse—media being about as popular as road-killed skunk.

Nevertheless, the newspaper formerly known as the Grey Lady, aka The New York Times, attracted a bit of attention Monday when it endorsed two Democratic candidates at once (!) for the presidency—Amy Klobuchar and Elizabeth Warren.

How is this female Gemini act even possible? Two can’t serve and their politics are far apart anyway. One is a semi-moderate (on a good day) while the other is a semi-leftist (who still says she’s a capitalist—go figure).

The primary reason was just that—to attract attention. Who would have cared if they had done the traditional thing of naming one candidate? And who in the known universe could be surprised that they endorsed a Democrat?

Lurking behind naming Warren and Klobuchar as their preferred candidates is the ominous specter of Bernie Sanders.

Socialist Bernie—the living incarnation of Eugene V. Debs, Norman Thomas or even that John Brennan favorite, perpetual CPUSA presidential candidate Gus Hall—is the proverbial bridge too far for the Times’ editors, mostly because they’re afraid he would lose, possibly badly, to the orange-haired, capitalist, loudmouthed incumbent who doesn’t even read the Times.

Worse than that, old Bern’ is said to have uttered that most extreme of contemporary no-no’s. He supposedly declared that a woman could not beat that same barely mentionable, now impeached, and theoretically disgraced president. Worse still, he faux-ed this particular faux pas directly to a woman, Ms. Warren, who squawked (i.e. leaked) about it.

What really transpired in that conversation is yet to be determined because this contretemps is yet another of a zillion he-said-she saids. But it’s good enough for the Times, and CNN apparently, to write off Sanders forever in this #metoo era.

Not that they’re entirely in love with Warren, whom they describe as a “great storyteller,” whatever that means. When you call, say, Hemingway a great storyteller, you can be sure of the intention. In the case of Fauxcohantas… well… if I were grading her college paper, I would say “needs improvement.”

Klobuchar comes out better in the Times’ endless editorial, but, ironically, at least to this reader and I suspect others, a bit of reverse English occurred when reading it. I began to sympathize with Bernie, whom I normally abhor. I also had a certain sympathy for the discarded Biden who, luckily for him, almost simultaneously became the hero of a video in which a friendly black woman—who happened to be the Times’ elevator operator—promised to vote for him. (This video went viral, far outdoing the Times’ own maudlin video version of the aforementioned editorial.)

But behind all this is something far more revealing and akin to the impeachment trial torture we are all about to undergo. What the Times’ equivocating editorial comes down to is that they don’t really care what the candidate stands for. They’ll take either/or. Beneath the liberal boilerplate, what they really care about, and virtually all they care about, is power.

So as to my headline—why these are “Groucho Marx endorsements”? Groucho, as President Rufus T. Firefly of Freedonia, explained the rules of his administration to the assembled doubters this way: “Those are my principles, and if you don’t like them… well, I have others.”

Sound familiar? In case you don’t recognize it, that’s from “Duck Soup,” arguably the greatest of all political film comedies.