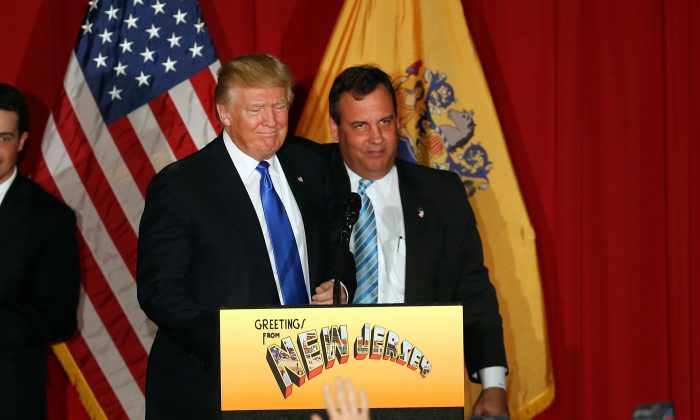 Republican presidential candidate Donald Trump with New Jersey Governor Chris Christie at the Lawrenceville National Guard Armory in Trump's first public campaign appearance in New Jersey on May 19, 2016 in Lawrenceville, New Jersey. The appearance with New Jersey Governor Chris Christie is a $200 per head event with proceeds going towards helping Christie, a Trump ally, pay off debt from his own presidential campaign. (Spencer Platt/Getty Images)
2016 race

What Will Chris Christie and Newt Gingrich Do Now?

Donald Trump named Mike Pence as his Vice Presidential candidate, leaving open the question of what role the VP candidates that were passed up for the job will have in a Trump administration.

The two finalists who were passed up were former Speaker of the House Newt Gingrich and New Jersey Governor Chris Christie. Each has received high praise from Trump.

Christie was Trump’s first major political supporter—endorsing him in February—and has been leading Trump’s transition team into the general election since May.

Christie said the day before the announcement on MSNBC that while he would continue to focus on making sure Trump was elected president, it would “bother him” if he were not chosen.

This is the second time that the New Jersey governor has been vetted and passed over as a vice presidential running mate. Romney vetted him in 2012, but chose the current Speaker of the House Paul Ryan instead.

Another position that Christie has been rumored to be interested in is the position of attorney general. Christie was appointed as the United States attorney for New Jersey by President George W. Bush and held that post from 2002 to 2008.

Trump has previously said that Christie would “make a great attorney general,” according to Breitbart, although he’s made one enemy on the Trump team, Ivanka Trump’s husband and the campaign’s de facto manager, Jared Kushner.

In 2004 Christie prosecuted and jailed Charles Kushner for 18 felonies, including making illegal campaign contributions and evading taxes. The younger Kushner was said to have opposed Christie as a possible VP in favor of Newt Gingrich, according to NJ.com.

Christie was also hit with a scandal when former mentor and ally David Samson, who the Republican governor tapped as chairman of the Port Authority of New York and New Jersey, pleaded guilty Thursday to using his position to pressure United Airlines to reinstate a flight from Newark to Columbia, South Carolina, to make it easier to get to his vacation home.

Newt Gingrich’s position in the campaign is much more fluid than Christie’s, having been a critic of Trump in the past. However, an interview before the VP announcement has left some clues the former Speaker of the House will continue in some fashion.

“Donald and I have already talked about that as an option if I don’t end up as the vice presidential nominee,” Gingrich said on The Mike Gallagher Show before Mike Pence was announced as the running mate, according to Politico.

“But I will play as significant a role as possible getting us back on the right track and reforming our government so that it functions again on behalf of the American people instead of behalf of lobbyists and bureaucrats,” Gingrich said.

Gingrich recently stirred up controversy in the wake of the terror attack in Nice, France when he said that “Western Civilization is in a war,” and called for a test of every American with a Muslim background “and if they believe in Sharia, they should be deported.”

Sharia Law is the legal system that governs the Islamic faith, which Gingrich says is “incompatible with Western Civilization.”

One of Trump’s most visible surrogates, Ben Carson, said that Gingrich will play a large part of the Trump administration. Exactly what position is unclear.