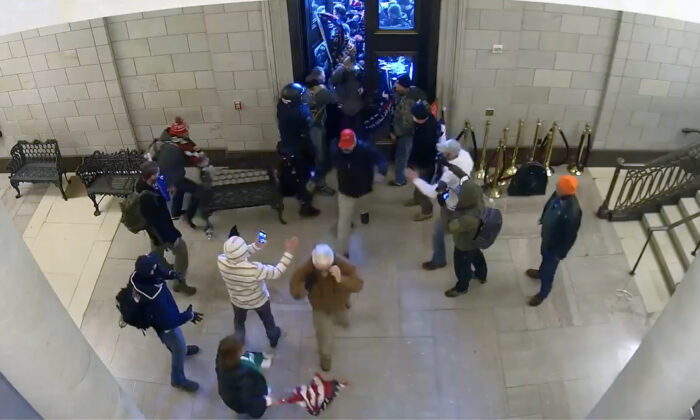 People flow into the Capitol Rotunda after being let in by a protester, shown on this surveillance video on Jan. 6, 2021. (U.S. Department of Justice/Screenshot via The Epoch Times)
Viewpoints

What the Jan. 6 Capitol Incursion Really Was

After the 2020 presidential election, my Epoch Times columns summarized actions state legislatures could take in states with disputed results. When asked to do so, I also summarized those options directly to interested state lawmakers. Last week, a leftist website distorted this into a claim that I “guided” private citizens to represent themselves as presidential electors without legislative authorization.

My guess is that the author hoped I’d be subpoenaed by Congress’s Jan. 6 committee—the “Select Committee to Investigate the January 6th Attack on the United States Capitol.” Perhaps he thinks I’m a “co-conspirator” in the “insurrection.”

I don’t think a subpoena is likely, though, because the committee probably wouldn’t want to hear what I’d have to say. It is this: The Capitol incursion was wrong, but it was not an “insurrection.” It was a very different kind of event with deep roots in our Anglo-American heritage.

What Would Have Happened in D.C. if Trump Had Won?

To put the Jan. 6 event into context, let us ask this question: What would have happened in Washington, D.C. if Donald Trump had won re-election?

We don’t have to speculate much, because we have a lot of experience with leftist protests. The 1968 Watts riots, for example, lasted for six days and killed over 30 people. More recent incidents include, in 2011, the 17-day occupation of the Wisconsin State Capitol; in 2018 the storming of the Supreme Court, invasion of the U.S. Capitol, and seizure of the Hart Senate Office Building; and in 2020 the Black Lives Matter/Antifa riots.

So we know the playbook. Here’s what would have happened in Washington if Trump had won:

Tens of thousands of protesters descend upon the city. Massive marches, some undertaken without permits, block bridges and roads. Protesters leave mounds of filth behind them.

Many protesters riot. Vehicles transport bricks and other potential weapons to strategic points to arm rioters. Rioters use them, as well as weapons they brought with them, to smash windows and loot all throughout the central areas of the city. They start fires everywhere. Graffiti and vandalism are of Augean proportions.

Protesters trumpet insurrectionary slogans: “No Trump, no wall, no U.S.A. at all.” They create “autonomous zones” purportedly independent of the U.S. government. They attack and tear into the Capitol and other public buildings. In some buildings, they camp for days or weeks, until the police can get them out. In other buildings they start fires and leave. They assault police officers, counter-demonstrators, and bystanders with chemicals, bricks, and other weapons—severely injuring many and killing some.

Meanwhile, CNN reports that the protesters are “mostly peaceful.” Rioters apprehended by the police are often released on minor charges or with no charges at all. Kamala Harris and others raise bail money so that few violent offenders suffer jail time.

How the Capitol Incursion Was Different

The Capitol incursion was the work of a small minority of the Trump supporters who gathered in Washington, D.C. on Jan. 6. They focused on the Capitol and the Capitol alone. But they didn’t attack private property or other public buildings. They didn’t loot businesses or assault bystanders. They didn’t occupy other public spaces. They caused damage estimated at $1.5 million, compared to the BLM/Antifa riot total of over $1 billion. The only person to die from the application of force was a rioter shot, likely without justification, by a police officer.

And while the 2011 leftist occupation of the Wisconsin State Capitol lasted over two weeks, the Jan. 6 U.S. Capitol incursion was over in about four hours.

Many of those arrested were typical trouble-makers. But many were otherwise-respectable community leaders: a police officer, “teachers, multiple firefighters, a company CEO, and numerous elected officials.” Unlike leftist demonstrators, they didn’t envision themselves as overturning the Constitution, but protecting it.

This riot was very wrong. But it was also in a different category from those regularly sponsored by the left.

The late Pauline Maier was a distinguished historian of colonial and Revolutionary America. She identified an Anglo-American tradition of “limited forcible resistance.” Although different kinds of actions fit this description, they all have four characteristics:

How the Capitol Incursion Fits

The Capitol incursion met all of the first three criteria. It was targeted at the Capitol, where the protesters believed fraudulent electoral votes were being counted. There were few casualties, very few weapons, and the crowd included community leaders who believed they were defending the Constitution.

Recall that the 2020 election was marred by numerous and serious allegations of irregularities in six or seven crucial states. In a previous column, I documented one undeniable irregularity: the widespread use of mail-in ballots in violation of a constitutionally authorized federal law.

Other allegations were less clearly proven, and it was uncertain whether they flipped any state’s electoral votes. Yet they were serious enough to cry out for speedy investigation.

Those whose duty it was to investigate refused to do so. State and local election officials assured us that their own administration of the vote had been just ducky. State legislatures, whom the Constitution charges with overseeing the choice of electors, seemed paralyzed. Their legislative lawyers, unfamiliar with this arcane area of constitutional law, sometimes told legislatures they had no options.

The courts employed legal technicalities to slam the doors on almost all lawsuits challenging the certified election results. The mainstream media asserted over and over again—without serious investigation—that charges of irregularities were “baseless” and that the courts had rejected them on the merits.

All of the usual remedies for election irregularities had failed. So some protesters concluded they had only one remedy left: They could enter the Capitol to tell the vice president and members of Congress to stop the electoral vote count pending an investigation. But when the protesters arrived at the Capitol, they found their entrance barred.

The plan to enter the Capitol and confront the vice president and members of Congress was not only illegal, but also foolish. As I informed curious state lawmakers after the election, the practical deadline for challenging the election results was Dec. 14, 2020, the day Congress had designated for the Electoral College vote. Jan. 6 was too late.

Moreover, under the Electoral Count Act (pdf) (which probably isn’t constitutionally binding on these joint sessions, but which they generally follow) the only way to displace a state-certified delegation of presidential electors is for both Houses of Congress to vote to do so. There was no chance this would happen in a Democratic Congress.

In any event, it’s incredible that anyone could believe that the framers would write a Constitution that gave one man—likely a presidential or vice-presidential candidate himself—power to delay or overturn a presidential election.

Still, It Wasn’t an ‘Insurrection’

All of that having been said, it’s wrongheaded to classify the Jan. 6 riot as an “insurrection” rather than what it was: limited forcible resistance undertaken by people convinced they had no other remedy.

Maier observed that limited forcible resistance traditionally was viewed as a sign the government had failed in some way. There were two methods of stopping it. One was to impose a repressive tyranny—a “cure” worse than the disease. The other, far better approach, was to address the deficiencies that provoked the resistance.

In the case of the 2020 election, those deficiencies were the failure of officials and the media to promptly investigate credible allegations of irregularities and, if necessary, to undertake corrective action. At the least, this would have assured people that Joe Biden (or Trump) had really won.

Let’s hope the Jan. 6 committee shows enough humility to recognize the official and media culpability contributing to this sad incident. It probably won’t, but I hope it will.