What It’s Like at Ground Zero: A Hurricane Survivor’s Story 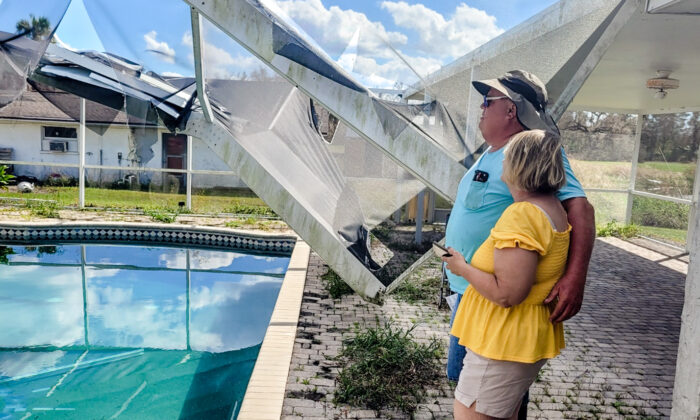 Epoch Times reporter Jann Falkenstern and her husband, Pete, survey the damage to their pool enclosure at their Punta Gorda, Fla., home on Oct. 5, 2022, a week after Hurricane Ian thrashed their property. (Courtesy of Jann Falkenstern)
By Jannis Falkenstern

That all changed with Hurricane Ian on Sept. 28. I hated to disappoint my old professor, but here I am “being the news,” all thanks to Ian.

My husband, Pete, and I have been through three major hurricanes while living in the Sunshine State during our 22-year marriage. The worst, before Ian, was Hurricane Charley, a Category 4 storm in 2004.

Charley had a 5-mile-wide eye and blasted through Punta Gorda in an hour. The storm packed damaging winds that left behind a swath of crumpled structures. Our home and yard suffered heartbreaking damage.

But as hurricanes go, Charley was a quick-moving storm.

So as “veteran hurricane survivors,” we were brimming with confidence, even as Ian suddenly dodged right—heading directly toward us.

We can ride out this storm, we assured each other. And probably with minor property damage. Not to worry, right?

Pete operates a dump truck business, and, as he does when any ominous storm turns in our direction, he set up what he calls “redneck hurricane shutters.”

Soon, a small fleet of red-and-black dump trucks and a yellow front-end loader stood guard around our home, ready to hold back the wind and any flying debris. Pete birthed that ingenious idea after Charley’s unwelcome visit 18 years earlier.

Up went our “shutters” for hurricanes Jeanne and Irma. We made it through those storms just fine. Ian’s pelting rain and angry wind would be no match for our invincible fortress.

Trucks also ringed our new fifth-wheel camper. We figured we might have to go without power for a little while. So, we planned to live there, enjoying the comforts powered by a generator, until linemen could restore electricity to the house.

Forecasters predicted the storm would hit the Tampa Bay area, 90 miles north. Ian had other ideas.

On Sept. 27, the storm veered to the right and assumed the same path as Charley. With winds building to 155 miles per hour, Ian began inching ever closer to the tranquil waters of Charlotte Harbor. That inlet of the Gulf of Mexico laps at the shore across the street from our home.

The next day, Hurricane Ian rudely introduced himself to our community at 10:30 a.m. Then, he overstayed his welcome.

Instead of passing through politely in an hour, Ian lingered for 12, demolishing homes, splitting trees, and flinging precious belongings in the air like an oversized toddler throwing a tantrum.

The Blessings of Ian

Through the initial hours, Pete and I distracted ourselves by trying to reassure Ross and Rita Davis, transplants from Portland, Oregon, who moved to our community this spring. They came to face Ian with us and our three senior dogs.

We were the only veteran hurricane survivors they knew, and they decided to shelter with us behind our wall of dump trucks when their other options disappeared.

When they first moved in next door, we’d exchanged the expected pleasantries. We smiled and waved as we passed each other in cars and at mailboxes.

But we never got to know them on a personal level—until Ian came into the relationship.

Before the storm, they became concerned and then afraid. They’d never been part of the waiting for a hurricane to show its path.

Talk of evacuation was unfamiliar to Ross and Rita. And when Ian’s path changed, it was too late for them to flee to safety away from Charlotte Harbor, ground zero.

We gladly took them in. Ross and Rita brought over a pot of home-cooked stew. As rain and wind began pelting the house, we combined our resources and engaged in great conversation about their lives in Portland.

Despite the din of the storm that raged outside, we enjoyed our time forging new friendships.

Never again will I take for granted the opportunity to get to know our neighbors. It’s one of the blessings I’ll carry away from Ian.

A Time to Survive

Hours later, all went calm, and the men ventured outside. Together, they worked on firing up the onboard generator on the camper. Until power could be restored to the house, we had already decided that we’d stay there. Maybe it would be days. Maybe weeks.

We made it! Smugly, we reveled in the fact that we’d dodged another bullet.

Without power, we were still cut off from information. Cellphone service was spotty. No updates were coming in.

My news team colleagues fretted, watching radar and weather reports. The eye of the storm was passing over us. And the worst was yet to come.

Unaware, Rita and I chatted in the camper, and I held Buddy, a pug-Chihuahua mix, in my lap. He’s always needed comfort during storms. Overflowing with relief, we chatted, eagerly anticipating the restoration of air-conditioning, a must in balmy Florida.

Then suddenly, the winds shifted and became fierce again. The camper rocked violently.

Clutching Buddy to my chest, I stepped out with Rita and made a run for the house. The wind was so strong, and the rain pelted us so hard, it felt like knives pricking our faces. We had to cling to each other to make it back inside.

Poor Buddy quaked with fear, traumatized. Was it the howling, screaming wind that terrified him, or my own pounding heart that telegraphed that it was time to panic? I couldn’t tell.

It alerted me to a truth. I realized I couldn’t allow myself to become emotional or hysterical. I had to be strong for everyone else.

So I buried my fear and pasted on a smile. I so desperately wanted to scream and cry. I questioned how we could have been so wrong about staying put, instead of escaping. But this wasn’t the time for regrets, I told myself. It was a time to survive.

We’d been back in the house for about five seconds when we heard a horrible ripping sound and felt a burst of hot, humid air blow in, sending papers and books flying. The 155-mph winds had pushed in a window.

Rain poured in. I had to stop it.

I pushed through the rain, wind, and flying debris to the gaping hole in my wall. With great effort, I hauled the window up off the floor and shoved it back into the opening. Then, I leaned against it, using all the strength I could muster to hold it in place.

Bracing a broken window with my body wasn’t wise, I knew. But in those moments of chaos and panic, no other course of action made sense.

Then glancing up, I saw my front lanai tear away from the house. A white rocking chair from Cracker Barrel took flight as well. And all four tires of my new Jeep Wagoneer left the ground, bouncing as the wind whipped under it.

All I could think was, Lord, hear my prayer! The rosary I use for guided prayer had long since blown away.

Then, Rita screamed. I saw the twisted wreckage of the aluminum enclosure that had covered our backyard pool. It had collapsed into a crumpled heap.

I was in the middle of a war zone. Metal slammed into the side of the house. Ian hurled our neighbors’ patio furniture across the yard. Transformers crashed to the ground from the tops of utility poles and exploded.

We’re entirely on our own! I realized. No help could come to us now.

We had to be smart. I was determined Ian wouldn’t win this war.

Then, the cavalry rode to the rescue.

Ross threw his body against the window, joining me as the winds pushed it back at us. Then, Pete rigged two 50-pound bags of dog food against the window, held in place with a crutch left over from an ankle injury. In battle, you use the resources you have.

Wondering if we’d make it out alive, all we could do was pray. And, knowing that our messages might not go through, we texted loved ones and friends, telling them we loved them.

As 11 p.m. approached, we’d had all we could take. We were tired. So tired. We no longer cared about the horrors outside our walls.

Winds had ebbed to 40-to-50 mph, but were still strong enough to bend trees and toss debris around. We secured the pets and our neighbors in other rooms and crawled into bed.

If we didn’t make it through, this would be how they would find us—still holding onto one another, a testament to 22 years together.

But we did make it.

Ian moved on to ravage more inland areas of the state. And the next morning, the sun smiled down on devastation the likes of which I’d never imagined.

It was my home. But nothing was familiar.

The stillness was punctuated only by the distant roar of chainsaws. They chewed into fallen trees that were trapping families in their homes and blocking roadways that rescuers needed to travel to reach people in need of help.

A few days passed with more of the same. Finally, a grocery store opened, and survivors of the storm stumbled in like zombies. They all had the same lost look in their eyes.

I understand now what shell-shocked means. I’m pretty sure it’s reflected in my eyes, too.

As the shock begins to wear off, grief will take over. We’ll all process it differently. My training in psychology assures me of that.

Natural disasters can either bring out the best in people or the worst.

At the grocery store that day, I noticed acts of kindness and understanding. People smiled at each other when they unintentionally collided in crowded aisles or inadvertently knocked something off a shelf. They helped pass out-of-reach items to each other. Some gave up treasures in their shopping carts to strangers who seemed to need them more.

That’s the kindness that resides in all of us. It’s awakened when a community goes through a tragic event together.

We realize we can lose all our belongings. But we still have life. We still have one another. And for that, we can all be grateful.