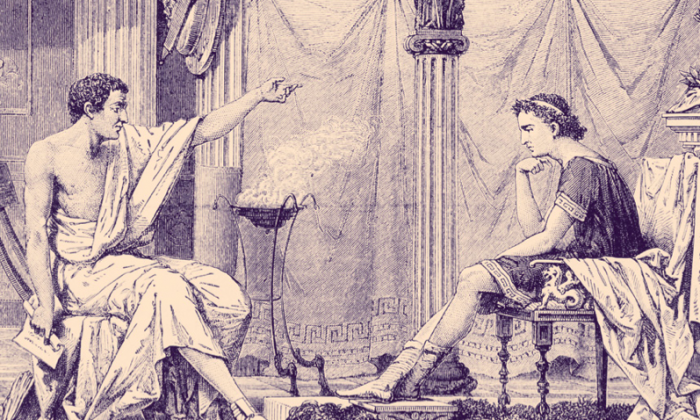 Aristotle, who taught Alexander the Great, believed the practice of virtue to be the foundation of good leadership. (Everett Collection/shutterstock)
Men & Women: Embracing Our Differences

What It Means to Be a Man

“Traditional masculinity” was recently deemed “harmful” by the American Psychological Association (APA). Among the traits it directly condemned were “emotional stoicism” and “self-reliance.”

The APA report on “Guidelines for Psychological Practice with Boys and Men” was followed by an inflammatory commercial from shaving product company Gillette, which likewise condemned traditional masculinity by framing it as abusive and devoid of empathy.

When people today say “be a man,” often what they’re referring to is being superficially tough, boiling the concept down to its weakest form.

Of course, we can’t blame today’s men for this. Popular culture has portrayed “manly” men as little more than thugs who are cold in their relationships and numb in feeling, or who only care for their own interests.

Meanwhile, men are discouraged from embodying even the most basic “manly” traits, at risk of being accused of “toxic masculinity.” Popular culture has played a clever game: Break the masculine character down to its most basic level, then attack anyone who dares embody it.

What I was taught about being a man, however, is a very different concept. I was taught that to be a man is to be a leader, and if a man wants to play this role well, he must learn the virtues of good leadership. It’s a path that requires sacrificing your own interests for the sake of others, being considerate of those in your care, and being willing to make decisions at key moments. Even the concept of why men should be tough is grounded in this deeper principle.

Back when I was a young man, in my teenage years and on the cusp of adulthood, I had the gift of having a good mentor. At the time, I would often make a fuss about any hardship and would make sure everyone heard about it if I got injured. One day, my mentor finally got tired of it and sat me down to have a talk.

In a community, people naturally look to strong men for leadership, and in times of hardship, they look to these same men for a sense of security. If those men look panicked, then the people who look to them for leadership will feel like they need to fend for themselves. If everyone is undergoing hardships, a good man needs to endure it with a stoic frame, which in turn shows others that they, too, can endure it—giving them the courage to also face the hardship.

In other words, rather than stealing the strength of others, or boosting his own image, a good man refines his inner strength to help strengthen those around him.

Leaders come in many varieties. History has shown us both good and bad examples of this. And even from the bad examples, we can take positive lessons by learning from their errors.

These same principles apply to how a man balances his personal interest with the interests of others, in any relationship.

I believe that “manliness” has developed negative connotations for two reasons: First, that people with political interests—mainly rooted in communist ideas—have sought to overthrow all authority and social hierarchy, which requires the destruction of men; and second, that few men still understand what it means to be good leaders.

Regardless of what the “experts” say to demonize masculine traits, I would wager that few women are interested in men who are indecisive, unmotivated, and weak in spirit—which is the direction they are pushing men toward.

The solution isn’t to abandon masculinity altogether, but instead for men to forge their characters so they can embody the positive forms of masculinity.

These principles were well-known in the past.

The 17th-century Japanese philosopher Yamaga Soko wrote in “The Way of the Knight,” “A man of mettle faces life-or-death situations, treading on naked blades, making swords and spears fly, evincing firm discipline, facing serious matters and making important decisions—all this without disturbance in voice or appearance.”

He adds that “the civil and military capacities to stabilize the world this way are to be found in greatness of heart.”

The ancient Chinese military text “Wei Liaozi” states, “Those who led the people in ancient times put courtesy and faithfulness before rank and salary, modesty before discipline, and friendliness before regulation.”

The “Six Secret Teachings,” another ancient Chinese military text, advises leaders: “Be calm and serene, gentle and moderate. Be generous, not contentious; be open-hearted and even-minded. Treat people correctly.”

In the Western tradition, the ancient Greek philosopher Aristotle explains in “Nicomachean Ethics” that knowledge is only valuable if it can be used toward the goodness of others, and that the foundation of good leadership is the practice of virtue.

When most people think of “toxic masculinity,” what likely comes to mind are the so-called “dark triad” traits of narcissism, psychopathy, and Machiavellianism. In other words, these are men who are self-obsessed, don’t consider the consequences of their actions, and regard all things in life as a game of strategy.

Ironically, these traits are also what define the “bad boy” image that many women find attractive.

If you were to ask me, however, I would say the whole image has been turned upside down. It’s not an issue of whether men retain masculine traits or abandon them completely, but instead whether they can hone their innate nature to harness the positive aspects of masculinity.
The so-called “dark triad” revolves around the negative aspects of these traits, based in selfishness. Yet, I believe these traits also have their redeeming qualities.

Behind a narcissist is a man who is confident and who believes in himself. Behind a psychopath—by that I mean a man who doesn’t consider consequences before acting—is a man who is decisive and quick to act. And behind a Machiavellian mind is a man who has ambitions in life, who can build strategies to achieve great things.

Now, I can only speak so much for women, but I would wager that the reason they like men with these traits is because they see the potential virtues in them, and believe they can save these men from the darker sides of their character.

When a woman tries to see herself with a man, she typically doesn’t look only at his appearance, but also the world he carries with him. In a relationship, his life will become her life, and his ability to deal with hardships, to react quickly when faced with choices—and to be confident in the choices he makes—all have a big impact on the quality of life they’ll have together.

Of course, as Aristotle explains, just about anything can be problematic when taken to an extreme. The key is finding the “golden mean,” that pleasant middle ground without deficiency or excess.
The dangerous thing for men is when we tell them to forsake their nature altogether—to toss out everything that makes them men, to defy what they feel inside, and to feel ashamed of who they are. If people don’t face their inner nature, their darker traits can go unrestrained and their virtues can go unrefined.

To cultivate the better parts of their inner natures, however, men need to put in a lot of effort. This may have been easier in the past when men could more readily find good mentors and role models, and when fathers weren’t being lost through divorce.

Yet, there is still plenty out there to guide us. History has left for us a wealth of knowledge, from the stoics of Greece and Rome to the Confucian scholars of China and Japan. Traditional martial arts still teach self-control and discipline; sports still teach teamwork and camaraderie. And we also can turn to the wealth of wisdom within our own cultures—the values of our forefathers, and the ancient mythology and classics history has preserved.

Through these, we can still find a way back—and find hope for good men.

Joshua Philipp is a senior investigative reporter at The Epoch Times.