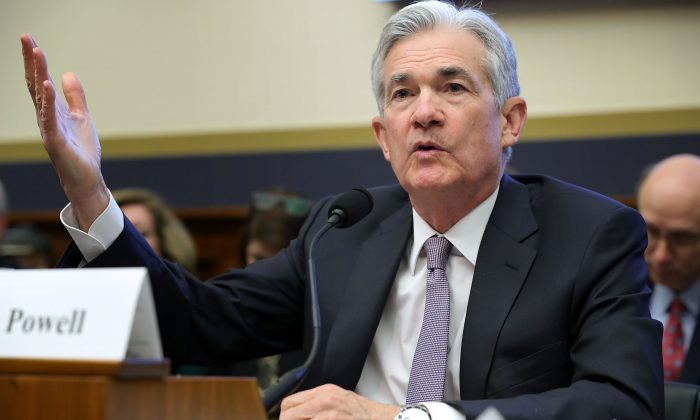 What If Chairman Powell Is Wrong About Interest Rates?

President Donald Trump caused a bit of a stir last week when he suggested that rising interest rates are cause for concern. Pundits fretted about “Fed independence,” a concept rendered completely meaningless in the age of quantitative easing.

We agree with the president that Federal Reserve Board Chairman Jerome Powell is “a good man,” yet we also think it is high time that elected officials started to hold the Federal Open Market Committee more accountable for its policy decisions.

Powell nicely describes the concept of accountability. “We owe you and the public in general clear explanations about what we are doing and why we are doing it,” said the Fed chairman to the Senate banking committee on July 18. “Monetary policy affects everyone and should be a mystery to no one.” Powell’s comments are timely because not only are the Fed’s rates going up, short-term rates are going up more than long-term rates, the so-called inversion of the yield curve.

In an exchange with Sen. Bob Menendez (D-N.J.), Powell essentially endorsed QE2 and Operation Twist, saying that he was “glad” that the FOMC continued to manipulate the bond market years longer than necessary in the quest for the holy grail of full employment.

In the subsequent exchange with Sen. Pat Toomey (D-Pa.), Powell deflected a fairly pointed question about the Fed’s “deliberate” manipulation of the Treasury yield curve.

“Historically, the Fed has just manipulated short-term rates, the discount rate, and the fed funds rate, and let the markets decide other interest rates,” said Toomey.

“That all changed with quantitative easing when the Fed became the biggest market participant in with respect to the purchase of Treasuries and it changed in an explicit way when the Fed decided that it would intentionally manipulate the shape of the yield curve with Operation Twist, which was very consciously and willfully designed to change the shape of the curve.

“Some people are concerned that a flattening curve or an inverted curve correlates with economic recession.”

When Toomey asked Powell about whether the changing shape of the curve would alter Fed policy regarding the composition of the balance sheet, Powell responded:

“What really matters is what the neutral rate of interest is. I think people look at the shape of the curve because they think there is a message in longer run rates, which reflect many things, but that longer rates tell us something about the longer run neutral rate. That is really why the slope of the yield curve matters. So I look directly at that. If you raise short-term rates higher than long-term rates, then maybe your policy is tighter than you think.”

Powell may not be an economist by training, but he is sure starting to sound like one—to our great concern. Conceptually, the neutral (or natural) rate of interest (R* in economist lingo) is the rate at which real GDP is growing at its trend rate, and inflation is stable. This decidedly indefinite concept is widely attributed to Swedish economist Knut Wicksell and, it is alleged, “forms an important part of the Austrian theory of the business cycle.”

Most adherents to free-market economic ideas agree with the 20th Century American economist Irving Fisher (1867–1947) in rejecting the idea of a discernable “business cycle” along with speculations about natural or neutral interest rates. Concepts like neutral interest rates, equilibrium, and full employment are, by definition, indefinite and speculative, much like calculating the position of an object moving through space-time, to borrow from the work of Stephen William Hawking (1942–2018).

Irving Fisher put the issue nicely in his 1933 essay on debt deflation when he refuted the existence of business cycles:

“The old and apparently still persistent notion of “the” business cycle, as a single, simple, self-generating cycle (analogous to that of a pendulum swinging under influence of the single force of gravity) and as actually realized historically in regularly recurring crises, is a myth.

“Any one cycle, however perfect and like a sine curve it may tend to be, is sure to be interfered with by other tendencies.”

Unlike market interest rates, the neutral rate or R* is the product of a model. The whole notion of “neutral” market rates goes hand in hand with neo-Keynesian concepts such as market equilibrium and full employment. Neither can be observed or even described scientifically, much less replicated via experimentation. This fact did not prevent Powell from telling Toomey that he “looks at it”—namely the invisible and indiscernible natural rate of interest—when assessing U.S. monetary policy.

Sadly, Toomey ran out of time and was not able to follow-up with Powell on the rapidly flattening yield curve. One question he ought to ask is why the FOMC thinks that “deliberately” manipulating the prices of and yield spreads between different securities is OK but that the committee is now justified in doing nothing to manage the process of normalization as the curve very deliberately inverts.

As Tao Wu of the San Francisco Fed noted in 2005: “The difficulty policymakers face is that it is not obvious exactly what the level of the neutral real rate is. It cannot be observed directly. There is no reliable way to estimate it. And it can change.”

Of course, in order to assess the “neutral” rate of interest, you need to have an accurate idea about the current level of inflation. As we’ve noted in past comments, key measures of inflation such as the PCE deflator seem to be distorted to the upside because of noise coming from, of all things, financial services. Strangely, nobody at the Fed seems to be worried that a key benchmark for describing inflation may be overstated—and this may be due to the financialization of the U.S. economy described so eloquently by Toomey last week.

Powell and other FOMC members may think they know where the neutral interest rate is at present, but we’d like to see our esteemed Fed chief be a tad more specific about this key policy metric.

If Powell is wrong about the neutral rate, and continues to ignore the market message contained in a flattening yield curve, then the consequences for markets and investors could be quite serious. We notice, for example, that Morgan Stanley saw a 76 percent increase in interest expense in the second quarter of 2018 compared with a year ago.

At a minimum, the FOMC should consider engaging in open market intervention of the same magnitude as Operation Twist to manage the yield curve on the journey back to normal. As Powell stated last week, when short-term rates rise above long-term rates, then “maybe your policy is tighter than you think.”