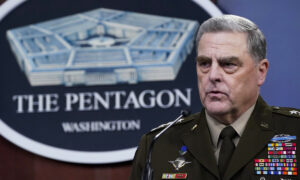 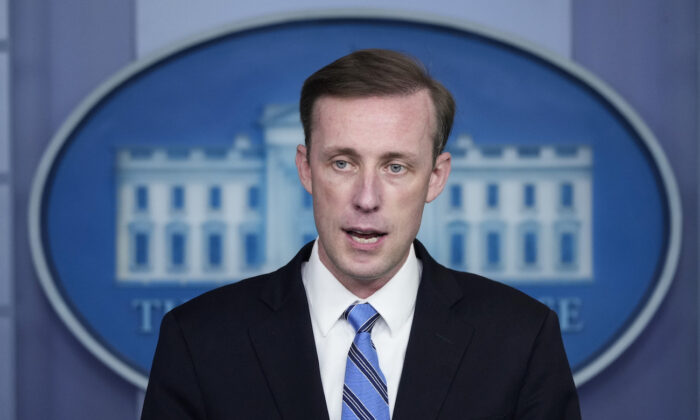 White House National Security Adviser Declines to Call Taliban an Enemy: ‘It’s Hard to Put a Label on It’

White House national security adviser Jake Sullivan refused to brand the Taliban an enemy of the United States during an appearance on MSNBC on Aug.31.

Sullivan appeared on the show just days after the final withdrawal of American troops from Afghanistan, which has seen the Taliban take control of the capital after the leader of the U.S.-backed Afghan government fled the country.

When asked by reporters about U.S. relations with the Taliban following their takeover of Kabul and whether they were considered a “frenemy, adversary, or enemy,” Sullivan said he was unsure how to define the relationship with the terrorist group.

“Well, it’s hard to put a label on it, in part, because we have yet to see what they are going to be now that they are in control—physical control of Afghanistan,” Sullivan said.

“They will, in the coming days, announce a government. That government is going to go around seeking diplomatic engagement, even recognition from other countries, including the United States. In fact, the Taliban spokesman today said he was looking for positive relations on behalf of the Taliban, especially with the United States.”

Sullivan went on to add that while the Taliban were not “nice guys,” the administration hopes it can work alongside them to make the evacuation of remaining U.S. citizens and allies in the country run smoothly.

“We’re not just going to grant positive relations to the Taliban. They’re going to have to earn everything from the international community through actions, not words,” Sullivan said.

“That begins with safe passage for Americans and Afghan allies, and that also includes them living up to their counterterrorism commitments, including that Afghanistan can never again be used as a base with which to attack the United States or our allies.”

On Monday, the Pentagon announced that the last U.S. troops had departed from Afghanistan’s Hamid Karzai International Airport, just a few hours before dawn, marking the end of America’s longest war and leaving the country in a state of uncertainty with the Taliban controlling most of the country.

Anti-Taliban fighters have gathered in the Panjshir Valley just north of Kabul, vowing to resist Taliban rule if the terrorist group does not agree on negotiations to form a representative government free of Sharia law.

Afghanistan’s first vice president, Amrullah Saleh, who is seeking support as the country’s acting president according to the constitution, is also gathered with Massoud and other like-minded government figures in the Panjshir Valley.

U.S. officials, including Central Command head Gen. Frank McKenzie, this week admitted that “hundreds” of Americans seeking evacuation have been left in the country.

“There’s a lot of heartbreak associated with this departure. We did not get everybody out that we wanted to get out,” McKenzie said, adding that it is a “tough situation.”

While the Taliban have vowed that they will run the country more moderately than when it last held power 20 years ago, Afghans and the international community are skeptical of such claims amid reports of executions, arrests, detentions, and threats.

One evacuee, Fawad, a PhD scholar who worked for the government prior to the Taliban takeover, told The Epoch Times that the organization is gaining control over Kabul through threats and coercion.

Fawad claims the terrorist group tracked down his address and paid a visit in search for him, shortly after he managed to escape his homeland with his son and wife on Aug. 24.

The former government worker said he knew of three other Afghans—one in a high-ranking position in the Afghan media—who had been detained and tortured by the Taliban for three days.

Meanwhile, a leaked report from the nonprofit RHIPTO Norwegian Centre for Global Analyses, which provides intelligence to the United Nations, appears to back up claims that the Taliban have been committing violent acts of retaliation on its opponents.

The report said that the Taliban terrorist group was carrying out highly organized door-to-door manhunts for people on their wanted list, threatening to kill or harm their relatives if they do not surrender.

The U.S. State Department has not included the Taliban in its list of terrorist organisation, while its allies the Haqqani network, al Qaeda, and its Pakistani cousin Tehrik-e Taliban Pakistan, are recognized as terrorists.