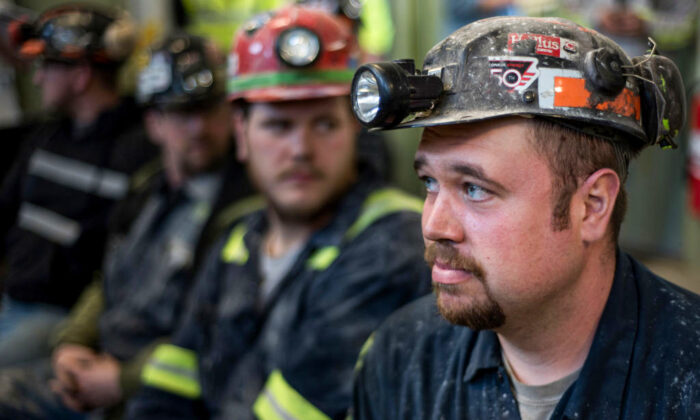 Financial institutions that are boycotting energy producing companies have been warned against doing so by West Virginia's treasury. Pictured is coal miner Matt Wolfe, of Blacksville, W.Va., on April 13, 2017, in Sycamore, Pa. (Photo by Justin Merriman/Getty Images)
By Nathan Worcester

Six banks have been warned by the West Virginia State Treasury that they may be in violation of a new law preventing the state from doing business with financial institutions boycotting energy companies.

The office told The Epoch Times it had sent out letters on June 10, but didn’t share the banks’ names on the record.

Those institutions must respond within 30 days of receiving those notification letters to avoid winding up on the list.

“We felt like we had a clear conflict of interest,” West Virginia Treasurer Riley Moore said at a June 8 press conference.

He cited firms that he said want to benefit from the state’s finances while simultaneously “trying to diminish our dollars and destroy our industries.”

The letters come after months of escalating conflict between many energy-producing states and much of the financial sector.

In May 2021, Moore and treasurers from 14 other states sent a letter to U.S. climate envoy John Kerry to express their concerns about private comments that he made to banks in March of that year. He reportedly asked major financial institutions to step up their climate commitments.

“We intend to put banks and financial institutions on notice of our position, as we urge them not to give in to pressure from the Biden administration to refuse to lend to or invest in coal, oil, and natural gas companies,” Moore and his colleagues wrote at the time.

A March 2021 letter from 145 environmental organizations demanded that Kerry “[end] the flow of private finance” to the fossil fuel industry, specifically requesting that he push asset managers “to divest from pure-play coal, oil, and gas.”

In January of this year, West Virginia divested from BlackRock, the world’s largest asset manager.

“BlackRock CEO Larry Fink has been outspoken in pressuring corporate leaders to commit to investment goals that will undermine reliable energy sources like coal, natural gas and oil under the guise of helping the planet, but at the same time he’s pouring billions in new capital into China, turning a blind eye to abhorrent human rights violations, genocide and that country’s role in creating the COVID-19 global pandemic,” Moore said in a Jan. 17 statement explaining the decision.

Moore told The Epoch Times he hasn’t yet heard from BlackRock.

In his view, the war in Ukraine underscores the vital importance of maintaining domestic energy resources.

“There is power in this type of energy, and I just don’t mean electrification. I mean, power for the countries. And that’s why energy independence is so important,” he told The Epoch Times in a June 8 interview.

Moore said it would be “very easy” to get West Virginia to change its increasingly aggressive stance toward financial institutions that have turned against fossil fuels or embraced extreme environmental, social, and governance (ESG) investment practices.

“All you all need to do is have banks act like banks, asset managers act like asset managers, and maximize returns for your shareholders and your company. It’s pretty simple. I mean, that’s kind of how capitalism works,” he said.

The Epoch Times has requested additional information on the six banks from the West Virginia Treasury.

The Epoch Times has also reached out to BlackRock.