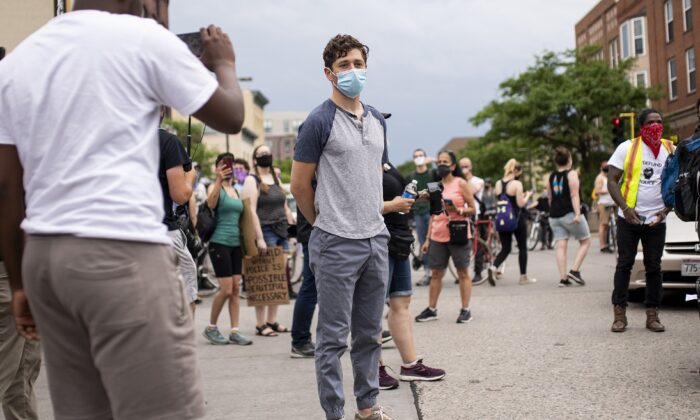 Minneapolis Mayor Jacob Frey looks over a demonstration calling for the Minneapolis Police Department to be defunded in Minneapolis, Minn., on June 6, 2020. Frey spoke at the head of the march but was asked to leave by the organizers after declining to commit to fully defunding the MPD. (Stephen Maturen/Getty Images)
Viewpoints

You could say the shaming of Minneapolis Mayor Jacob Frey for failing to pledge to defund the police in his city—“Go home, Jacob! Go home!” the crowd chanted in unison as Frey slunk away, head bowed—signaled the beginning of an American version of China’s Great Proletarian Cultural Revolution.

But you would be wrong.

Frey’s defenestration—the crowd promised to put him out of office; they all but put him in a cultural revolutionary dunce cap and paraded him around—was more of an apotheosis than a beginning.

This American cultural revolution began decades ago on our campuses and in our media. Now, it’s taking over our streets.

But it’s our schools, primarily, that have been the instigators of this. In far too many cases, they have gradually turned into institutions resembling indoctrination camps. This is true from kindergarten through Ph.D. and from the Ivy League to bare-bones community colleges.

Viewpoint diversity is a thing of the past, with faculty meetings morphing into our own versions of Maoist “struggle sessions,” teachers and professors first shutting their mouths if they disagree, then exercising what amounts to “self-criticism” to save their jobs or just to gain some peace.

Students have gotten the message, writing their papers and editing their classroom speech in a manner not to offend the politically correct faculty, administration, and fellow students that surround them.

And what is politically correct often changes from day to day, but, no matter what, conformity rules. You have to be part of the program, or you’re out. Even basic math is under assault.

With our children educated this way for years, no wonder, as adults or close, they are out on the streets mercilessly ridiculing an ultra-liberal, actually progressive, urban mayor for holding an opinion that was totally normative last week.

Our media, of course, are products of the same educational system and have long been prepared to ratify and amplify these same behaviors and views. The communications and journalism departments of our universities are literal fonts of groupthink, training students to be propagandists for the glorious new future.

(As I type this, it was announced that New York Times Editorial Page Editor James Bennet has resigned in shame for having the temerity to publish an op-ed by Sen. Tom Cotton (R-Ark.) in the paper—talk about Cultural Revolution.)

The results of our educational system are the primary cause of what we have been seeing in Minneapolis and across the rest of the country. Our campus social justice warriors have taken to the streets, taken them over, actually, and are trying to enforce the same extreme leftist claptrap they do in the schools.

And they’re doing a good job of it.

Where will this end? According to Wikipedia, “The Cultural Revolution damaged China’s economy while tens of millions of people were persecuted, with an estimated death toll ranging from hundreds of thousands to 20 million.”

That’s not as bad as Mao’s previous adventure, the Great Leap Forward, during which an estimated 18 million to 45 million died, making the Great Helmsman the greatest mass murderer of all time, outdoing Stalin and Hitler.

That catastrophic result is unlikely to happen here, but it will be bad enough anyway. Groupthink has other consequences that were illuminated by George Orwell and Aldous Huxley as the road to a modern form of fascism.

Those who do it recognize a simple truth. While for Mao, social class was the lever of control, in America, it’s almost always race.

Our situation may ultimately be the more perilous. While you can become de-classed by changing your work and financial status, racism is a more lethal accusation because it’s impossible to prove you’re not a racist. All manner of people have been accused of it without evidence. It can be literally endless.

Look what happened to the hapless Frey. He’s a racist now, too, despite having wept over the casket of George Floyd.

America is poised on a precipice. Nevertheless, there’s some cause to be optimistic in the long run. Things often return to the norm, eventually. The Cultural Revolution, like the semblable French Revolution in its bloody Robespierre period, finally became ineffective in its excesses. It burned out.

Unfortunately, there is a lot of rubble to be cleared away after. Sometimes, years of it.

The most important rubble we have to clear out is that bias in our school systems. Only then will our young people be truly educated citizens and be able to realize the dreams of our founders as free people.

Roger L. Simon is The Epoch Times’ senior political analyst. He’s also a prize-winning novelist, Oscar-nominated screenwriter, and the co-founder of PJ Media. His most recent books are “I Know Best: How Moral Narcissism Is Destroying Our Republic, If It Hasn’t Already” (non-fiction) and “The GOAT” (fiction).