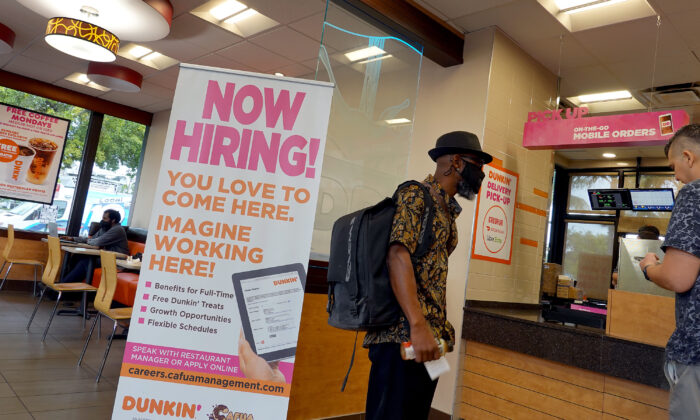 First-time filings for unemployment insurance—a proxy for layoffs—came in at 281,000 for the week ending Oct. 23, the Labor Department said in a statement (pdf). The consensus forecast was for 290,000 claims.

“New claims for unemployment benefits surprised on the downside, coming in lower-than-expected with a decline of 10,000 to 281,000,” Bankrate senior economic analyst Mark Hamrick told The Epoch Times in an emailed statement.

“Reflecting fresh job loss, this is the fourth straight weekly drop continuing to tiptoe closer to pre-pandemic levels,” Hamrick added, with the Labor Department’s announcement representing the lowest level for initial claims since March 14, 2020, when there were 256,000 weekly filings.

Continuing claims, which run a week behind the headline number and represent people continuing to collect benefits after earlier making an initial filing, dropped by 237,000 to 2.2 million, touching a new pandemic-era low. This is the lowest level of continuing claims since March 14, 2020, when there were about 1.77 million claims.

The total number of Americans receiving some form of jobless assistance fell by around 448,000 to 2.83 million for the week ending Oct. 9, with the comparable week in 2020 seeing nearly 23.5 million claims.

“On the less positive side of the data ledger, the annualized gain in third-quarter GDP was 2 percent, well below the trend earlier in the year,” Hamrick said, referring to Thursday’s Commerce Department announcement of third-quarter U.S. economic output, which came in considerably below the Dow Jones forecast of 2.8 percent.

“Even so, that ‘disappointing’ reading is consistent with the U.S. long-term trend, likely only a fairly temporary speed bump caused by the global traffic jam of goods with which we’ve become all too familiar,” he added.

The Commerce Department said in an Oct. 28 release that the deceleration in economic output was driven chiefly by a slowdown in consumer spending, with much of the impact of fiscal stimulus waning in the third quarter, including from forgivable loans to businesses and direct payments to households.

Rep. Claudia Tenney (R-N.Y.), who serves on the House Small Business Committee, took to Twitter to comment on the lackluster GDP print.

“We’re now 0/3 in hitting our targets this year. More reckless spending and tax hikes won’t solve this crisis, they’ll make it even worse,” she wrote.

The U.S. economy grew at a 6.7 percent pace in the second quarter.