‘We Will Hold the Line’: Freedom Convoy Organizers Say They’re Not Deterred by Emergencies Act

Limin Zhou
Limin Zhou is a reporter based in Ottawa.
View profile
and Omid Ghoreishi

OTTAWA—Freedom Convoy organizers say they will continue to protest on Parliament Hill despite the federal government’s declaration of a state of emergency.

“We are not afraid. In fact, every time the government decides to further suspend our civil liberties, our resolve strengthens and the importance of our mission becomes clearer,” organizer Tamara Lich said on Feb. 14 in anticipation of Prime Minister Justin Trudeau invoking the Emergencies Act over the protests demanding an end to COVID-19 mandates.

“We will remain peaceful, but planted on Parliament Hill until the mandates are decisively ended. We recognize that there is a democratic process within which change occurs. We have never stepped outside of that process, nor do we intend to.”

Trudeau is the first prime minister to use the Emergencies Act. The act replaces the War Measures Act, which was last used by Trudeau’s father, then-prime minister Pierre Trudeau, in 1970 during the October Crisis when Quebec separatists kidnapped and killed Quebec cabinet minister Pierre Laporte.

The act gives the state additional powers to deal with the protests and blockades, such as providing legal tools to cut funding to protesters, as well as freezing the corporate accounts of companies whose trucks are used in any blockades and removing their insurance.

The province of Ontario and the city of Ottawa have also declared states of emergency over the protest.

The protest was initiated by truck drivers opposed to COVID-19 vaccination mandates for cross-border travel. As convoys of truckers made their to Ottawa, many supporters joined the movement, which turned into a large-scale protest against all COVID-19 mandates and restrictions. Many protesters who converged into Ottawa on Jan. 29 say they intend to stay in the capital until COVID-19 mandates are lifted.

Separately, protest convoys set up blockades at border crossings in Ontario, Alberta, Manitoba, and British Columbia. The blockade at the Ambassador Bridge connecting Windsor to Detroit, which accounts for hundreds of millions of dollars in trade between Canada and the United States, was cleared over the past weekend. The protest at the Coutts border crossing in Alberta ended on Feb. 14, as did the protest at the Pacific Highway Border Crossing in Surrey, B.C.

“The Emergencies Act will be used to strengthen and support law enforcement agencies at all levels across the country. This is about keeping Canadians safe, protecting people’s jobs, and restoring confidence in our institutions,” Trudeau said.

“The police will be given more tools to restore order in places where public assemblies can constitute illegal and dangerous activities such as blockades and occupations as seen in Ottawa, Ambassador Bridge, and elsewhere.”

Lich said Canadians “should be surprised” that such “an extreme measure” is being used against peaceful protesters.

“We have countless vulnerable people in our crowd, including children, the elderly, and the disabled, who cannot be met with force by a genuine liberal democracy. The right to peaceful protest is sacrosanct to our nation. If that principle is abandoned, the government will reveal itself as a true tyranny and it will lose all of its credibility,” she said.

Lich said she realizes some people are opposed to the protests, but noted that a democratic society “will always have non-trivial disagreements and righteous dissidents.”

“There are many reasons for us opposing the mandates,” she said. “Some of us have been mistreated by our government, including many of our indigenous communities, who have personally experienced medical malpractice. Some of us simply want bodily autonomy and oppose the mandates on principled grounds. No matter our reasons and opinions, it is how the government responds to its citizens that determines the fate of the country.”

Addressing the prime minister, Lich said, “No matter what you do, we will hold the line.”

“There are no threats that will frighten us.”

Brian Peckford, former premier of Newfoundland who is acting as a spokesperson for the Freedom Convoy, said this is “a very, very strange moment in our history.”

“This is again government overreach. We don’t do these kinds of things in Canada. We engage in dialogue,” Peckford said. Peckford is the last surviving architect of the Canadian Charter of Rights and Freedoms.

“It’s my understanding that the government of Canada has not reached out once to the truckers since they have arrived in this capital city. I find that very hard to understand, because how can you justify going to a measure like an emergency, measures where a lot of powers can be imposed upon the citizens, when you have not even yourself taken any action to engage.”

Limin Zhou
Limin Zhou is a reporter based in Ottawa. 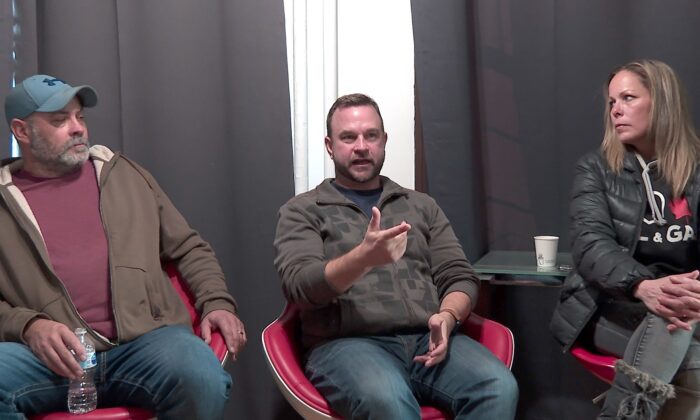