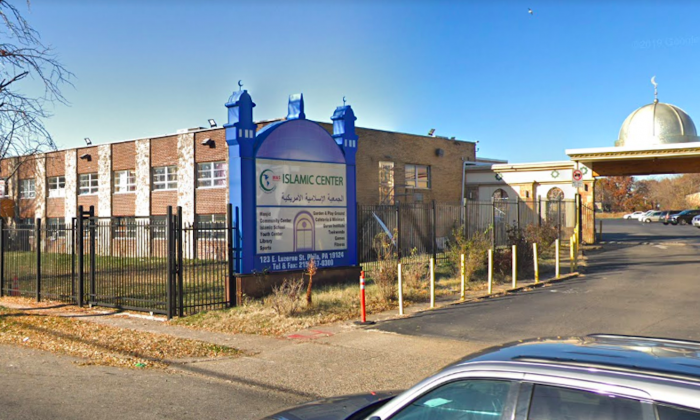 Google Street View of the Muslim American Society in Philadelphia in November 2018. (Google Maps)
US News

‘We Will Chop Off Their Heads’ for Allah, Children in Philadelphia Muslim Society Say: Reports

Disturbing footage has emerged from an Islamic Center in Philadelphia, showing children reportedly lip-syncing to songs and reading poems saying they would sacrifice themselves and kill for Allah.

The Muslim American Society Islamic Center in Philadelphia (MAS Philly) uploaded videos on April 22 to its Facebook page. The videos show children singing lyrics that appear to call on the next generation of Palestinian youth to embrace terrorism and glorify suicide bombers, according to the Investigative Project on Terrorism (IPT).

The boys were shown to be lip-syncing a song, during which several of them held up a copy of the Quran.

“The blood of the martyrs is calling us. Paradise, men desire it,” they mouthed to the song, according to IPT. “Revolutionaries, Revolutionaries … Sword and Text, oh free men.”

The song continues: ”Until we liberate our lands, until we reach our anchorages, and we crush the traitor … Oh, the winds of Paradise. Oh rivers of the martyrs, lads. My Islam calls whoever responds. Stand up, O righteous ones.”

IPT Exclusive Video: Children at a Muslim school run by @mas_national in #Philadelphia sing about the "Blood of Martyrs" and fighting #Israel pic.twitter.com/Rw9dTEfaqm

The videos were shot on April 17, when MAS Philly held an annual “Ummah Day.” The theme of the event was advertised as focusing on the “Golden age of Islamic science.”

But IPT commented that instead of focusing on the scientific achievements of the Islamic world, part of the day was instead showcasing children “forced to embrace radical Islamist culture.”

Imam Mohammad Tawhidi shared a video of the incident online and wrote on Twitter: “We warn the West from what we fled from in the Middle East, but the West doesn’t want to listen. This is your next generation.”

We warn the West from what we fled from in the Middle East, but the West doesn’t want to listen. This is your next generation: https://t.co/3zeU2PFSfa

Tawhidi is a Muslim who lives between Washington D.C. and Australia. He uses social platforms like Twitter and Facebook to warn about the dangers that radical Islam can bring to the world.

‘We Will Chop Off Their Heads’

The Middle East Media Research Institute (MEMRI), a watchdog group, translated a poem a young girl was reading that praised martyrs who sacrificed their lives for Palestine.

“Our martyrs sacrificed their lives without hesitation. They attained Paradise, and the scent of musk emanates from their bodies. They compete with one another to reach Paradise. Will Jerusalem be their capital city, or will it be a hotbed for cowards?” she said, according to MEMRI’s translation.

Children in Philadelphia Muslim Society: We Will Sacrifice Ourselves for Al-Aqsa; Will Chop off Their Heads, Subject Them to Eternal Torture pic.twitter.com/6ySfz0Ylel

Another girl read a violence-filled poem that appeared to encourage violence to remove Israel’s presence around Jerusalem’s Al-Aqsa mosque.

“We will defend the land of divine guidance with our bodies, and we will sacrifice our souls without hesitation,” she said, according to MEMRI. “We will chop off their heads, and we will liberate the sorrowful and exalted Al-Aqsa Mosque. We will lead the army of Allah fulfilling His promise, and we will subject them to eternal torture.”

Earlier, the kids reportedly sang: “The land of the Prophet Muhammad’s Night Journey is calling us. Our Palestine must return to us.”

MEMRI told Fox News in a statement that such occurrences “are not isolated incidents; they are happening in major centers of the country—including in Pennsylvania.”

Fox News reported that MAS had not responded to a request for comment about the video.

MAS Philly belongs to the Muslim American Society (MAS), which has 42 chapters in the United States and one chapter in the United Kingdom.

In 2014, the United Arab Emirates designated MAS as a terrorist organization mainly because of their ties to the Muslim Brotherhood. According to IPT, several MAS leaders have been linked to the Dar Al-Hijrah mosque in northern Virginia, “which serves as [an] incubator of hate and [has a] long track-record of radical and terrorist associations.”

The MAS website says that its mission is to “move people to strive for God-consciousness, liberty and justice, and to convey Islam with utmost clarity,” and that its vision is “a virtuous and just American society.” MAS did condemn the recent anti-Semitic white nationalist terror attack against the synagogue in San Diego, California, and the organization also condemned the Islamic terrorist attacks in Sri Lanka on Christian churches on Easter day.

The Israel National News called the songs anti-Israel, and noted how one song had promised to liberate the Temple Mount from “Zionists” and to “crush the traitor.”

“Israel controls security on the Temple Mount, but while Muslims have full and constant access to the mount, Jews are rarely allowed to ascend and banned from praying at the site. The Jordanian Waqf manages the site,” the Israel National News reported.

The Anti-Defamation League (ADL), a U.S.-based international Jewish NGO that is against anti-Semitism, released a statement condemning the apparent indoctrination.

“If the translation is accurate, this incident is extremely disturbing. Children should not be indoctrinated to hate. These young people should never have been asked to make speeches and dance and lip-sync to songs that glorify violence against Jews and the State of Israel,” the statement read.

“The conflict between Israelis and Palestinians is deeply complex and painful on all sides, and the only chance for a peaceful future is to teach our children to pursue peace. In a time of elevated anti-Jewish hate, all people must forcefully reject anti-Semitism wherever and whenever they see it.”