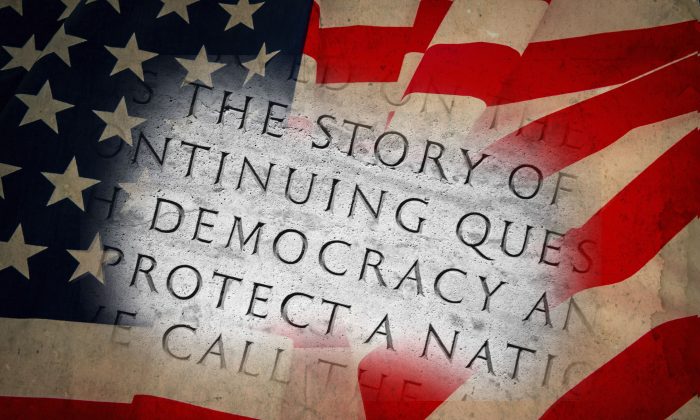 People who care about the U.S.’s place in the world often fret about challenges to representative democracy from other countries. I’d contend that the more formidable challenge comes not from abroad, but from within.

For starters, it’s hard to make American representative democracy work. Our country is large, growing, and astoundingly diverse by every definition of the term. To govern it, we rely on a bewildering array of branches and units of government, which means that to solve a problem you have to navigate a slow, untidy system.

And that system rests on the consent of a public that often wants mutually contradictory things: to encourage the risk-taking that produces a dynamic economy, for instance, while reining in the private sector’s excesses; or to shrink the deficit, but without cuts in defense spending or entitlements and no additional taxes.

The system rests on the consent of a public that often wants mutually contradictory things, and challenges come at us with rapidity and mind-boggling complexity.

Our challenges come at us with rapidity and mind-boggling complexity. They include racial and class divisions, the social and economic pressures confronting families, a strained public education system, a constant flow of complex foreign and economic policy questions. To deal with them, every level of our system needs to be at the top of its game.

I take heart from the diligence and creativity of many politicians, yet I’m worried that several trends, especially at the federal level, are weakening our ability to get the results we want.

I’m worried that several trends are weakening our ability to get the results we want. Two of our basic governing institutions, Congress and the presidency, are struggling.

Two of our basic governing institutions, Congress and the presidency, are struggling. Congress has adopted some unfortunate political and procedural habits: it governs by crisis, fails repeatedly to follow time-tested procedures that ensure accountability and fairness, panders to wealthy contributors, and too often erupts in excessive partisanship. There are glimmers that some members are willing to relearn the legislative arts of negotiation, compromise, and consensus-building, but these need to be front and center, not an occasional hobby: in a government that reflects the American population, Congress cannot function effectively without these skills.

The presidency, too, faces challenges. The executive branch is bloated, has too many decision makers and bases to touch, lacks accountability, and desperately needs better, more effective management.

Moreover, the decadeslong march toward increased presidential power at the expense of the legislative branch severely undercuts our constitutional system and raises the question of how far down this road can we go and still have representative democracy. There are valid reasons it has happened, especially because the modern world demands quick, decisive action. But our system functions best when we have a strong president and a strong Congress who can interact, consult, and work together.

We face other challenges as well. Too much money is threatening the core values of representative democracy. And too many Americans have become passive and disengaged from politics and policy; representative democracy is not a spectator sport. While the basics—voting, keeping oneself informed, communicating with officials, getting involved in organizations that promote the causes we believe in, improving our communities—are crucial, they aren’t always enough.

As citizens we also have to learn how to solve problems ourselves. We have to model the behavior we expect from our representatives at every level.

As citizens we also have to learn how to solve problems ourselves. We have to model the behavior we expect from our representatives at every level by ourselves working with all kinds of people, seeking to understand and find common ground with people who disagree with us, learning how to communicate our ideas effectively, and in our search for a remedy, building consensus behind the ideas we’re promoting.

Despite its challenges, our political system forms the core of American strength. It enshrines fundamental power in a body elected by the broad mass of the people, and is based solidly on the participation and consent of the governed. Allowed to work properly, it is the system most likely to produce policy that reflects a consensus among the governed. Above all, it has the capacity to correct itself and move on.

In other words, we don’t need to reinvent our system, but rather use its abundant strengths to find our way through our problems and emerge stronger on the other side.

It is not written in the stars that representative government will always prosper and prevail. It needs the active involvement of all of us, from ordinary voters to the president. Each of us must do our part.