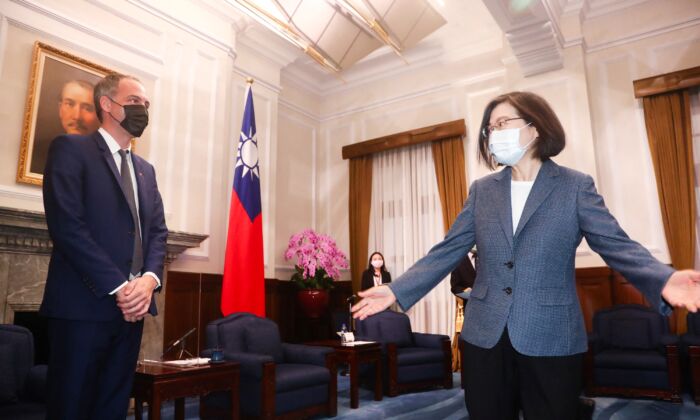 ‘We Came Here to Learn From You’: First European Parliament Delegation Visits Taiwan

Taiwan’s success and capacity to confront threats and disinformation from the Chinese regime is a “gold mine” for Europe, said Raphael Glucksmann, head of a visiting European Union delegation, during a joint press conference in Taipei with Taiwan President Tsai Ing-wen on Nov. 4.

“This is the first official visit from a delegation of the European Parliament [EP] to Taiwan. This is to ensure how important the Taiwanese democracy is for the European citizens we are representing,” said Glucksmann, a French member of the EP.

Tsai and other Taiwanese officials held a closed-door meeting with the delegates after their press conference.

The 13-person delegation that arrived in Taiwan on Nov. 3 for a three-day visit included seven members of the EP’s Special Committee on Foreign Interference in all Democratic Processes in the European Union, including Disinformation, who are from France, Lithuania, Czech Republic, Austria, Greece, and Italy.

“We came here with a very simple, very clear message: You are not alone. Europe is standing with you, by you, in the defense of freedom, rule of law, and human dignity,” Glucksmann said.

The French EP member said the European Union is facing large-scale interference from authoritarian regimes, in a veiled reference to Beijing.

During the press conference, Tsai said that her government would share its firsthand experiences in tackling challenges from China, such as disinformation, cyberattacks, and foreign infiltration.

“We hope to establish a democratic alliance against misinformation,” she said. “The challenges we face are global in nature.”

In 2015, Taiwan began to share its expertise such as law enforcement and cybersecurity with global partners through Global Cooperation and Training Framework, a platform joint-led by the United States, Taiwan, and Japan.

“Taiwan is also willing to share its experience in combating disinformation with our European friends. This will deepen our partnership and help safeguard the free and democratic way of life we enjoy,” Tsai said

Last week, Taiwan Foreign Minister Joseph Wu urged “freedom-loving countries” to work together against China, during a rare trip to Europe in the middle of heightened tensions between Taipei and Beijing. The trip occurred amid a Taiwanese delegation signing memorandums of understanding with Czech officials to bolster ties in cybersecurity and technology cooperation.

Self-ruled Taiwan, which China claims as its own and hasn’t ruled out taking by force, doesn’t have formal diplomatic relations with any European countries apart from Vatican City.

“Our visit shows how Taiwan now is very high on the agenda in Brussels and in every member state,” Glucksmann told Taiwan Premier Su Tseng-chang at a meeting a day earlier.

On Oct. 21, the EP adopted the EU–Taiwan Political Relations and Cooperation report by an overwhelming margin, with an approval rate of 86.3 percent, the second-highest approval rating during the current parliamentary term, according to Tsai, citing Taiwan’s ambassador in the EU and Belgium.