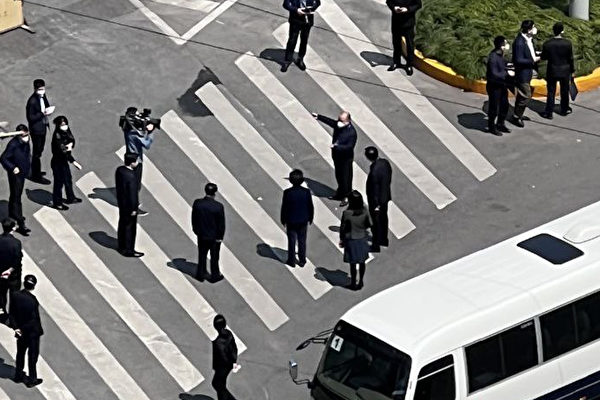 When Sun Chunlan, a vice premier of the Chinese regime, recently visited Shanghai, where tens of millions were under COVID-19 lockdown, she was greeted by residents shouting from their apartment windows: “There’s no food left!” and “We’re starving to death!”

Sun was accompanied by a swarm of local officials, cameramen, several vans with black tinted windows, and police vehicles. Yet, the streets were empty. The residents could only view the envoy from their apartments. Some were brave enough to shout from their windows or balconies. Someone called out to the officials, “Can you arrange some vegetables to be sent over?”

The officials, as seen in a video posted by residents in Jiading district, had no reaction whatsoever, as if they didn’t hear anything.

Sun, a former head of the United Front Work Department, was appointed vice premier in 2018. Out of the four vice premiers, she is the only female and the oldest. Since the pandemic began, she’s been staging high-profile visits to COVID-stricken cities. This isn’t the first time she’s been shouted at.

Shanghai ‘Must Win the Battle’

Amid mass testing and draconian lockdowns, Sun went to Shanghai with a stern message from Beijing, “Unswervingly adhere to the zero-COVID policy and win the battle against COVID as soon as possible!”

Since the pandemic began in 2020, Sun took on the unofficial role of “COVID messenger” delivering Beijing’s orders to cities around China.

She went to the northeastern province of Jilin in late March. In Jilin City, residents shouted from apartment buildings, “We have no vegetables!”

In mid-December 2021, Sun visited Xi’an city, 12 million population, when it was in lockdown. Sun urged the municipal government to “quickly reach zero cases.” While in Xi’an’s Gaoxin district, Sun was greeted by residents calling loudly, “I want to eat!”

Sun went to Wuhan in March 2020 after COVID broke out, and during her visit, residents called out “It’s fake, everything’s fake!”

Afterward, the Wuhan residential neighborhood suffered the consequences. The entire neighborhood was put under complete lockdown, and nobody was allowed to enter or exit.

Shanghai has been under lockdown since April 1. On April 4, Sun ordered the municipal government to “achieve zero COVID in society at large as soon as possible,” excluding quarantine hospitals.

According to recent online postings, the municipal government issued a notice saying the lockdown would continue until at least May 1. As for what would happen after May 1, the notice said it would be decided on May 1 whether to open up or continue the lockdown.

Many neighborhoods in Shanghai are in a chaotic state. Some people can’t get treatment. There’s a serious lack of food. Some elderly people have died in senior facilities without family members around. Babies are separated from their parents because their COVID-19 test results are different.

Videos also show truckloads of food supplies stuck on the outskirts of the city, unable to reach those in need.

There are also rotten vegetables and other foods sitting on the sidewalk, while at makeshift quarantine sites, one can see boxes of food piled up in trash dumps.