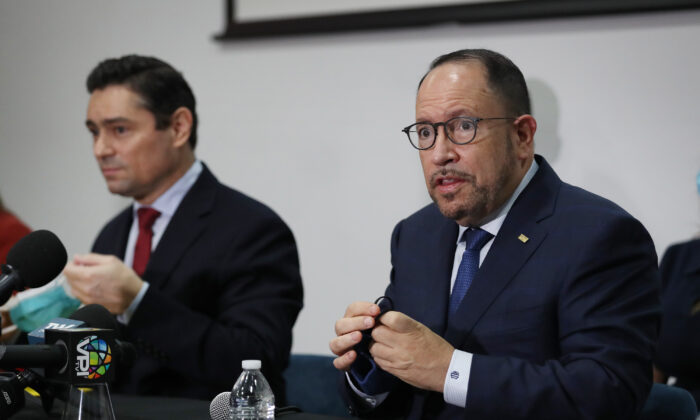 (L-R) Carlos Vecchio, the Venezuelan Ambassador who's recognized by the United States, and Goya Foods President Robert Unanue hold a press conference together on Dec. 21, 2020, in Doral, Fla. The two held the press conference to discuss details of a recent shipment of humanitarian aid to Venezuela, donated by Goya Foods. (Joe Raedle/Getty Images)
Business & Markets

‘We Are on the Precipice of a Food Shortage’: Goya CEO on Looming Food Crisis

Policies leading to a war on fossil fuels, as well as the Russian invasion of Ukraine, will contribute to a food crisis, according to Robert Unanue, president and CEO of Goya Foods.

“We are on the precipice of food shortage,” he said.

Russia and Ukraine together produce half the fertilizer used in the United States, and fertilizer prices have quadrupled since the Russian invasion, Unanue told EpochTV’s “Crossroads” program.

However, the fourfold surge in fertilizer prices will affect African and European countries more severely than the United States because the latter is currently more independent with regard to food, he said.

Another big problem, he said, is that it’s planting season in southeastern Ukraine and people are fighting a war.

“There’s 2.5 million acres of sunflowers to be planted,” he said.

Farmers there will be planting less and yielding less, because of the rising costs and the lack of good yield.

In addition, the irrigation systems in southeastern Ukraine have been bombed, and ports have been cut off, Unanue said. Mariupol, a port on the Azov Sea, has already been cut off, and Odesa, a Black Sea port, is the next target.

“That will landlock Ukraine and prevent them from exporting,” he said.

The biggest component of food cost is transportation, and the current war on fossil fuels has made the United States no longer oil independent.

“Shipping in a pipeline is free,” Unanue said. “But when you put it on a ship, with rates 10 times where they were two years ago, we are buying oil at retail.”

Nitrogen-based fertilizers are made from natural gas, so the war on fossil fuels and energy independence also affects the cost of fertilizers, he said.

The CEO gave an example of coconut water, which his company imports from Thailand in bulk, to illustrate the impact of the surge in transportation costs.

A case of coconut water used to cost $1.44, but now the cost per case has increased to $15 due to rising transportation expenditure.

Goya has embarked on a mission to provide humanitarian and spiritual aid to Ukrainian refugees in Poland. The company has partnered with organizations and individuals such as the Knights of Columbus of Poland, Global Empowerment Mission (GEM), and ex-U.S. green berets who will distribute food donated by Goya from its European facility, as well as rosaries donated by Americans, Unanue said.

He said the ex-green berets are very courageous men, having gone into 40 cities in Ukraine with food and medicine.

“We’re there with nourishing the body, but we also want to nourish the soul,” he said of the company’s creed. “God created humanity. But humanity has created the way to destroy itself—nuclear, chemical, biological. Now we’re using food as a weapon. We have to move closer to God.

“We need to love and build, not hate and destroy. And that’s our mission.”

With a food crisis looming, recent fires and other accidents have occurred at a multitude of food processing facilities within the past few months, raising concerns over yet another burden on an already vulnerable food industry.

Unanue said such incidents often occur because of having deferred preventive maintenance of these facilities during the pandemic. When lockdowns were imposed on most companies and businesses, the food industry kept working.

Since then, Goya has doubled its capacity and its facilities operate around the clock, but “any factory needs to stop for maintenance at least once a year,” he said, noting that Goya’s plants stop twice a year for maintenance.