‘We Are in Lock-Step With the US’: New Australian PM on Combating China’s Influence 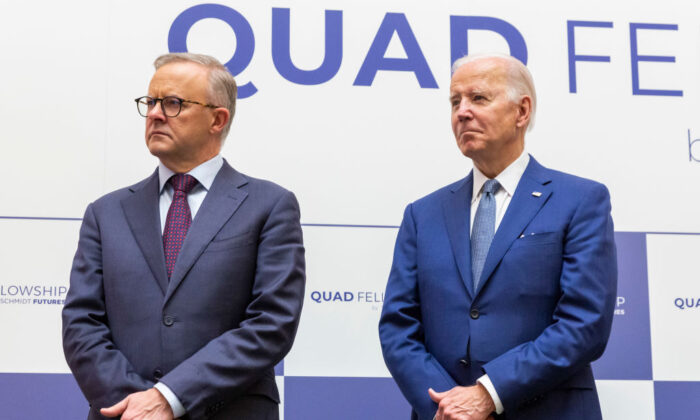 Australia will follow the United States’ lead in recognising China as “the most serious long-term challenge to the international order,” Australia’s newly elected Prime Minister Anthony Albanese has confirmed, as the communist regime continues stepping up its communist platform in the Pacific region.

Speaking to Sky News on Sunday, Australia’s 31st prime minster said, “Australia’s pretty much in lockstep with our allies in the United States” when he was asked about his centre-left Labor government’s approach towards China.

The comment comes after U.S Secretary of State Antony Blinken on May 26 declared that Washington “cannot rely on Beijing to change its trajectory” and would “shape the strategic environment around Beijing to advance our vision for an open, inclusive international system.”

“Even as President Putin’s war continues, we will remain focused on the most serious long-term challenge to the international order—and that’s posed by the People’s Republic of China,” Blinken said during his speech on the Biden administration’s China policy.

“China is the only country with both the intent to reshape the international order and, increasingly, the economic, diplomatic, military, and technological power to do it. Beijing’s vision would move us away from the universal values that have sustained so much of the world’s progress over the past 75 years.”

However, Blinken noted that the United States doesn’t want to sever China from the U.S. or global economy. “For our part, we want trade and investment as long as they’re fair and don’t jeopardize our national security,” he said, as he outlined policies that have been characterised by some defense and security experts as a “missed opportunity.”

“Competition need not lead to conflict. We do not seek it. We will work to avoid it. But we will defend our interests against any threats,” Blinken said, while noting that the international community was beginning to agree on the need to approach relations with Beijing with “more realism,” citing China’s “lack of reciprocity.”

He said that despite its rhetoric, Beijing is “pursuing asymmetric decoupling, seeking to make China less dependent on the world and the world more dependent on China.”

Blinken’s approach was echoed by Albanese, who stressed that his government would seek to “speak about competition without catastrophe” when dealing with China.

The prime minister acknowledged “there is strategic competition” between Australia and China’s communist regime but added that Labor would “deal with it in a mature way that recognises it’s in all of our interest for there to be peace and security in the region.”

He added that increasing engagements with Pacific nations is key to Labor’s policy in combating China, pointing to Foreign Minister Penny Wong’s trip to Fiji this week to deepen ties with neighbouring countries.

Labor also planned to invest in Australia’s defence training, maritime security and climate actions; increase parliamentary visits and work programs for the people of the Pacific; as well as improve the Pacific Islands’ infrastructure “to deal with the challenge of climate.”

However, former prime minister Scott Morrison has previously disputed the idea that boosting funding would be sufficient to curb China’s aggressive regional expansion.

“You’re suggesting if you double funding in the Pacific, somehow the Chinese government doesn’t have any influence or won’t be seeking to coerce or exert its influence,” Morrison said. “That assumption doesn’t hold.”

According to an election-eve leak, reported by The Australian, the Morrison government had disapproved a proposal by former foreign affairs minister Marise Payne to double Australia’s aid to the Pacific, fearful that Beijing could build a military base less than 2,000 kilometres from Australia.

China on Saturday inked a deal with the Pacific island nation of Samoa to deepen diplomatic ties. The agreement, signed by Chinese foreign minister Wang Yi on Day Three of a 10-day tour to eight Pacific countries, includes agreements on increasing cooperation for local law enforcement.

Wang’s trip to the Pacific has sparked concerns that Beijing’s ambition to shape the regional order is becoming more overt since the emergence of the Solomon-China military deal and Beijing’s domination in the South China sea.

“Beijing is moving faster and bigger in the South Pacific than Canberra may have expected and isn’t waiting to see what the Albanese government does,” said Michael Shoebridge, Director of the Australian Strategic Policy Institute’s (ASPI) Defence, Strategy and National Security program.

“The key judgement Pacific leaders must make is whether the highly intrusive authoritarian presence Beijing brings is worth the cash.”

In an ASPI commentary on May 26, Shoebridge wrote that given Beijing’s strategic “ambition, speed, and scale” in the Pacific, “what Australia is offering in contrast is not enough.”

“If we believe that, once we get the climate change policy right, just doing a bit more of what we’ve been doing for years will give us different results, we need to think again. What we have been doing has led us here.”

The defence expert also questioned the effectiveness of Labor’s foreign policy regarding China, saying that Australia needs a “bigger imagination of a shared region with our Pacific neighbours, not incremental expansion of existing schemes like seasonal workers … and more defence training.”