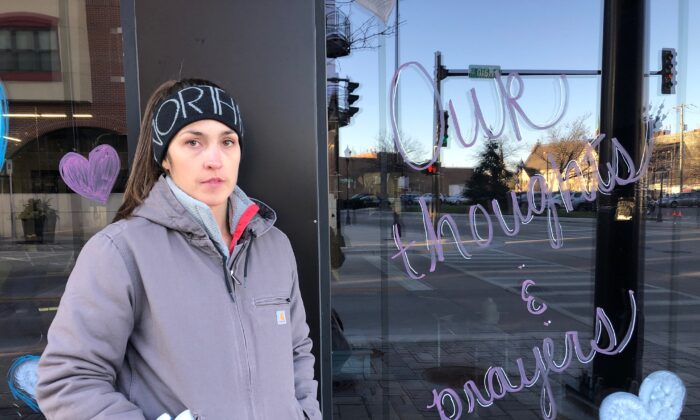 Waukesha local Elizabeth Boyd, who works with Smart Asset Realty, said she met her coworkers at their business in downtown Waukesha to draw inspiring messages on their windows to fellow Waukegans on Nov. 22, 2021, following an attack on their town's Christmas parade. (Cara Ding/The Epoch Times)
Crime and Incidents

Cara Ding
Cara is a Chicago-based Epoch Times reporter. She can be reached at cara.ding@epochtimes.com.
View profile
Follow
and Isabel van Brugen

WAUKESHA, Wis.—Waukesha residents say they are shaken, heartbroken, and in disbelief as the city attempts to recover in the aftermath of the Christmas parade attack that killed at least six and injured dozens more.

As much of downtown Waukesha, Wisconsin, remains shuttered, The Epoch Times spoke to residents about the mass casualty incident that saw a red SUV plow through scores of people at speed on Nov. 21.

Suspect Darrell E. Brooks, 39, was identified by authorities on Nov. 22 and has been charged with five counts of first-degree intentional homicide. Prosecutors said an additional count will be filed because a sixth victim—a child—died on Nov. 23.

Elizabeth Boyd, who works at real estate investment and property management company Smart Asset Realty in downtown Waukesha, told The Epoch Times that although she wasn’t at the Christmas parade, several of her colleagues who did attend were left shaken by what they witnessed.

“I have lived in Waukesha my whole life and don’t think anything like this has happened before. It was very hard to process. It really breaks your heart,” said Boyd.

Karla Maldonado, manager at Smart Asset Realty, said she met with colleagues on Nov. 22 to draw inspiring messages on their business windows. She told The Epoch Times that she is having difficulty processing the events that unfolded the night before.

“This is really hitting home. I couldn’t believe it could happen. I don’t think I have fully processed it and most of the time I try not to think about it,” Maldonado said, adding that when her son told her about the incident, she was in complete shock and immediately called everyone she knew at the parade to make sure they were safe.

Standing on the block where the incident unfolded, Sue Beedle, who moved to Waukesha from Chicago six years ago, said it’s hard to believe that such an incident could happen in the area.

“It’s [Waukesha] not hectic and metropolitan, and it’s full of kind, friendly and down to earth people,” Beedle told The Epoch Times. “It’s a storybook town, all the quaint shops, and no crimes. People in nearby cities visit Waukesha for festivals like the parade.”

“It’s hard to believe, they couldn’t believe it could happen. The grieving is going to take a long time, especially because it involves children,” Beedle added. “The city will need a long time to cope, and it certainly changed the mood and atmosphere of the holiday season.”

Eighteen children were among the more than 40 people injured in the incident, the Children’s Wisconsin hospital said in a statement. At least one is in critical condition, police said.

Those killed were identified by Police Chief Dan Thompson on Nov. 22 as Virginia Sorenson, 79; LeAnna Owens, 71; Tamara Durand, 52; Jane Kulich, 52; and Wilhelm Hospel, 82. An 8-year-old boy who was marching during the incident died on Nov. 23, bringing the death toll to six.

Local dance troupe, the Milwaukee Dancing Grannies, confirmed in a post on Facebook that several members were among those who were killed in the incident.

The suspect, Brooks, has two open criminal cases in Milwaukee County, including one filed on Nov. 5, which shows he is charged with resisting or obstructing an officer, reckless endangering, disorderly conduct, bail jumping, and battery. A cash bond of $1,000 was posted on Nov. 19, records show.

The motivation behind the attack isn’t yet clear, however, Thompson said it wasn’t a terrorist event.

Videos from the Christmas parade in Waukesha captured the moment a red SUV approached the parade before accelerating and plowing through dozens of people, including into a group of youngsters waving white pompoms.

One video showed the vehicle narrowly missing a young child dressed in pink, dancing on the side of the road, while another video, taken from an apartment overlooking the parade showed the SUV barreling through the crowd without stopping.

A business owner in her 50s in downtown Waukesha, who declined to disclose her name in fear of repercussions, described the attack as a “senseless act.”

“We will be fine. We will get through this. But it’s going to take a long time, especially having someone die and hurt during a holiday season,” she told The Epoch Times. “I don’t personally know anyone who died. But this is a small community and I just pray for the surviving victims and families.”

The Waukesha Police Department provided a phone number for a counseling service for anyone who witnessed the traumatic events and who needs to speak with a trained counselor.

“Our prayers go out to all the victims of this tragedy. This senseless act resulted in five deaths and 48 injured (that number may rise),” the local police said in a Nov. 22 statement.

A vigil was held on Nov. 22 at Cutler Park in the city for the victims of the attack.