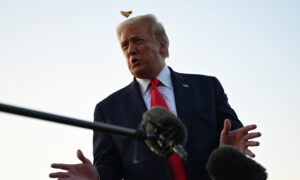 Trump: Nomination Acceptance Speech Will Be in Gettysburg or DC
0 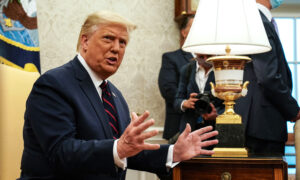 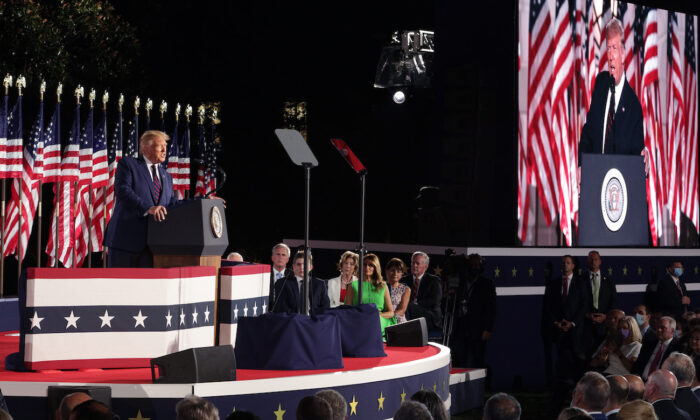 President Donald Trump delivers his acceptance speech for the Republican presidential nomination on the South Lawn of the White House in Washington on Aug. 27, 2020. (Alex Wong/Getty Images)
Viewpoints

Nashville is a blue city in a very red state but that didn’t stop several hundred Trump supporters from assembling—thanks to hardworking Metro Councilman Steve Glover—on the outskirts of town to listen to a band knock out “I’m a Honky Tonk Man,” chow down on pulled pork and then listen to the President give his acceptance speech on a Jumbotron.

You don’t get more Tennessee than that. (The lead singer of the first band was the Tennessee Senate Republican Majority leader—and he was good.)

Spirits were up because things were looking up for our embattled president. Whether through polling or the panicked look on the face of CNN’s Don Lemon. Joe Biden had to do something he didn’t do during the entirety of the Democratic Convention—admit American cities have a serious problem with violence.

Those assembled were the not-so-silent majority who despise Antifa and are not shy about telling you that Black Lives Matter doesn’t give a hoot for black lives. They know Marxist revolutionaries when they see them. (Of course they used a popular Anglo-Saxonism instead of hoot.)

The problem of our cities was on everybody’s mind. Was Nashville going to go the way of LA, NY, Seattle, Portland, Minneapolis, and all the rest that are in the kind of decline none of us believed would ever happen?

One man told me he just got off the phone with a friend in New York who said he and his friends were no longer primarily afraid of COVID. Their real fear was to walk safely in the streets of their neighborhood.

Speaking personally, almost every friend or acquaintance I talk to in New York and LA now, the two cities where I spent most of my life and were once two of the greatest cities in the world, is thinking of leaving or already on the way out.

This is an American tragedy that is truly unprecedented.

The Nashville story is complex and scary, particularly if Trump is not elected. It is also instructive in how these urban declines have happened.

Music City has a mayor, John Cooper, who, although a Democrat, was elected on promises of fiscal responsibility—Nashville, although a tourist mecca, is a financial disaster, while Tennessee itself is thriving—and political even-handedness.

Come COVID and the demonstrations, all that went out the window, assuming it was true in the first place. Cooper, like most Dem mayors, did little to stop the violence that, thankfully, was not as bad as elsewhere, though still threatening. The so-called peaceful demonstrators marched down Lower Broadway attacking the very honky-tonks that brought so much revenue into the city and spilled off so many jobs. Some Antifa idiot tried to burn down the courthouse.

Almost simultaneously Cooper raised property taxes a staggering 34 percent in one gulp in a move unopposed (with the exception of Glover and a couple of others) by the complaisant Metro Council. It passed before anybody knew it. The people have petitioned and this will finally be up for a vote in December.

The mayor is currently in a cold war with the club owners—not to mention the Grand Ole Opry and Ryman Auditorium—that give Nashville its character and make Music City Music City.

(The statue of Hank Williams in front of the Ryman was taken down presumably to prevent it being destroyed by the same “progressive protestors” that take down statues of the likes of Frederick Douglass and Teddy Roosevelt. Paradoxically, this is all right next door to the National Museum of African American Music currently being built in Nashville that was scheduled to open Labor Day 2020, an excellent ecumenical companion to the already-existing Country Music Hall of Fame.)

Some of this is unique to Nashville, of course, But most cities have unique characters evolved over time. The patterns are similar.

By the time Trump was speaking Thursday night, the rains came, so most of the assembly scattered.

I listened to the speech in the car and then on television when I got home. Many in the pundit class complained that it was too long, perhaps an attempt to show Trump could speak at length when Biden couldn’t.

I must be an idiot because this didn’t occur to me until I heard those same pundits. I liked the speech because it covered so many bases that need covering. This is indeed, as both candidates agree, an epochal election.

These are also times that have reached new levels of insanity, as evidenced by the treatment of Rep. Vernon Jones. As a reminder, he was the African-American man who said the following at Monday night’s Republican Convention session:

“The Democratic Party does not want black people to leave their mental plantation. We’ve been forced to be there for decades and generations, but I have news for Joe Biden: We are free, we are free people with free minds and I’m part of a large and growing segment of the black community who are independent thinkers and we believe that Donald Trump is the president that America needs to lead us forward.”

This is what Rep. Jones got in exchange on his way home from the President’s speech:

Roger L. Simon is an award-winning novelist, Oscar-nominated screenwriter and co-founder of PJ Media. He is now a columnist for The Epoch Times.