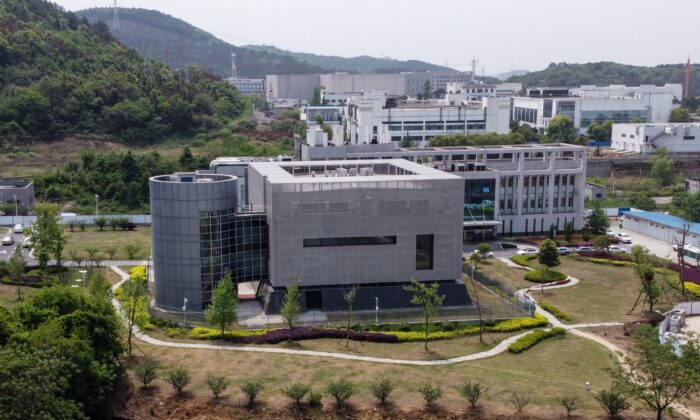 An aerial view shows the P4 laboratory at the Wuhan Institute of Virology in Wuhan in China's central Hubei Province on April 17, 2020. (Hector Retamal/AFP via Getty Images)
By Mark Tapscott

National Institutes of Health (NIH) documents obtained by a nonprofit watchdog in a federal court suit reveal that the agency deleted CCP virus genetic sequencing information from the Wuhan Institute of Virology at the Chinese lab’s request.

The Arlington, Virginia-based Empower Oversight Whistleblowers and Researchers (EO) obtained, as a result of a Freedom of Information Act (FOIA) request and lawsuit, more than 230 pages of documents dating from 2020 that include emails, memoranda, and other correspondence among and between the lab and multiple NIH officials.

The CCP virus, also known as the novel coronavirus, was first detected in China in late 2019, before it spread worldwide. Since the first death from the virus in the United States was reported in January 2020, an estimated 1 million Americans and 6 million globally have reportedly succumbed to the virus.

Controversy has raged in the United States over whether the virus originated in an animal-to-human transfer in a Wuhan-area wet market, as Chinese officials have insisted, or if it escaped from the Wuhan lab where research was being done on such viruses, some of which was being supported with NIH funds through the New York-based nonprofit EcoHealth Alliance.

Among the NIH officials prominently mentioned in the documents are then-NIH Director Dr. Francis Collins and National Institute for Allergies and Infectious Diseases (NIAID) Director Dr. Anthony Fauci, who actively participated in the discussions and decision-making described in the materials obtained by EO.

“On June 5, 2020, a Wuhan University researcher requested that NIH retract the researcher’s submission of BioProject ID PRJNA637497 because of error. The Wuhan researcher explained ‘I’m sorry for my wrong submitting,'” EO said in a statement on March 29.

“BioProject ID PRJNA637497 is also referred to as Submission ID SUB7554642. Three days later, on June 8th, the NIH declined the researcher’s request, advising that it prefers to edit or replace, as opposed to delete, sequences submitted to the SRA,” EO reported.

But then, on June 16, 2020, NIH officials reversed themselves and deleted the genetic sequencing data, as requested by the Wuhan researcher.

That researcher was quoted by EO as explaining to NIH: “Recently, I found that it’s hard to visit my submitted SRA data, and it would also be very difficult for me to update the data. I have submitted an updated version of this SRA data to another website, so I want to withdraw the old one at NCBI in order to avoid the data version issue.”

After some discussion about what would be deleted, the NIH concluded the discussion by reassuring the Wuhan researcher that it “had withdrawn everything.”

The documents also indicate, according to EO, that after researcher Jesse Bloom, a virologist at the Fred Hutchinson Cancer Research Center, “alerted NIH about the deleted sequences, [Collins] and [Fauci] hosted a Sunday afternoon Zoom meeting. The invitation Collins sent out for the meeting asks invitees to read Bloom’s [June 22, 2021] preprint paper closely and provide their ‘advice on the interpretation and significance of’ it.”

According to EO, the documents show that “Professor Trevor Bedford of the Fred Hutchinson Cancer Research Center later sent the group an email stating that the deleted data seemed to support the idea that the pandemic began outside the Huanan market in Wuhan and that the matter must be analyzed properly.”

If the virus’s spread began outside of the market, it would undermine the official Chinese government claim, and thus reinforce claims of experts in the United States and elsewhere that the pandemic likely escaped from the Wuhan lab.

The EO report also claims that NIH communications staff members were using off-the-record emails to advise “reporters toward more favorable coverage concerning termination of public access to the sequences by The Washington Post, and away from coverage by The New York Times, whose ‘tone’ had been criticized in communications among NIH officials.”

In addition, EO said NIH claims to have retained copies of the deleted data “for preservation purposes,” although the federal agency has refused to conduct a transparent examination of it.

An NIH spokesperson told The Epoch Times in an email that the sequences in question were submitted in March 2020 by a researcher at a China-based institution for posting in SRA, which it said it managed by NIH’s National Center for Biotechnology (NCBI).

“In June 2020, in response to a request by the same researcher, NCBI gave the sequence data the status of ‘withdrawn,’ which removes sequencing data from all public means of access but does not delete them. NCBI subsequently reassigned the status of the sequence data to ‘suppressed,’ which means that sequence data are removed from the search process but can be directly found by accession number. This action to reassign the data was identified as part of NLM’s ongoing review into the matter. We are working to make more information available,” the spokesperson said.

Collins, Fauci, and the NIAID did not respond to requests for comment.

The EO document release is likely to strengthen congressional efforts to get all the facts concerning the NIH’s role in funding the Wuhan lab research that may be at the center of the CCP virus’s creation and spread around the world.

Sen. Roger Marshall (R-Kan.), a physician who is a member of the Senate Committee on Health, Employment, Labor and Pensions (HELP), told The Epoch Times that “the NIH deleting key data at the onset of the pandemic has only caused more questions regarding its involvement on the emergence of” the virus.

“The American people deserve to know the truth behind the origins of COVID-19, as well as how we can best prepare for, prevent, and recover from future global pandemics,” Marshall said. “As a physician, I think we always need to know the what, where, how, and why when giving a diagnosis. For this reason, it couldn’t be more important that we get to the bottom of this deleted data and ensure that NIH operates at the interest of our national security.”

The HELP panel on March 15 approved legislation—the PREVENT Pandemics Act—that requires the establishment of a government task force to investigate the origins of the CCP virus. That legislation includes eight provisions authored by Marshall.

“This legislation is in response to the congressional inquiries and various media investigations–including The Epoch Times–revealing national security issues with federal agencies authorizing dangerous research with certain foreign entities that may have contributed to the COVID-19 pandemic,” Marshall’s office told The Epoch Times.

“Dr. Marshall secured his bipartisan 9/11-style COVID Task Force to investigate the origins of COVID-19, as well as find out how we can prepare for, prevent, and recover from future global pandemics,” his office said, adding that he seeks “to ensure that American organizations would never be allowed to conduct dangerous research capable of pandemic proportions with organizations in countries that threaten our national security.”

Sen. Marsha Blackburn (R-Tenn.) told The Epoch Times via email that “the radical left has systematically worked to cover the Chinese Communist Party’s tracks and hide the truth of COVID origins.”

“Dr. Fauci, the NIH, and liberal media giants weaponized the COVID-19 pandemic to shut down schools, businesses, and life for hardworking Americans. The report from Empower Oversight exposes what we’ve always known about COVID-19—it’s all about big government control,” she added.

Another Republican senator, Joni Ernst of Iowa, proposed last November to ban all federal funding of EcoHealth Alliance and the “gain-of-function” virus research it supported with federal funds at the Wuhan lab. Other congressional Republicans have also called for a federal investigation of the nonprofit.