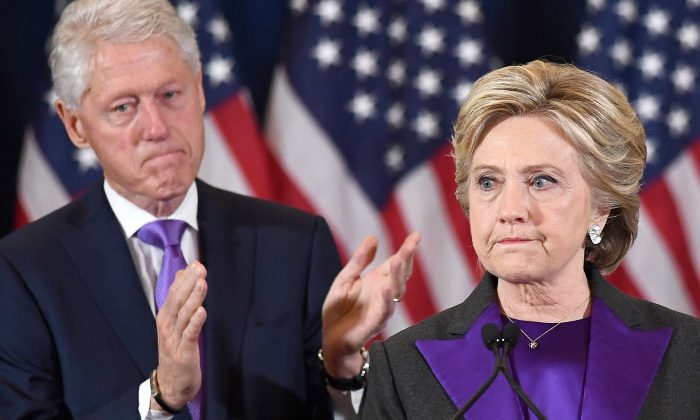 Hillary Clinton delivers her concession speech in New York after being defeated by Donald Trump on Nov. 9, 2016. (Jewel Samad/AFP/Getty Images)
US News

A government watchdog group sued the Office of the Director of National Intelligence (ODNI) on March 27 seeking documents related to an alleged FBI coverup of a lead in the Clinton email investigation, which suggested that virtually every email Hillary Clinton sent during her tenure as secretary of state was forwarded to a foreign actor.

Judicial Watch, a conservative foundation, filed the lawsuit after ODNI failed to produce documents responsive to a Freedom of Information Act (FOIA) request filed on July 13, 2018.

The inspector general discovered an “anomaly on Hillary Clinton’s emails,” Gohmert said, with nearly every single email “going to an address that was not on the distribution list.” Gohmert didn’t disclose the entity to which the emails were forwarded, describing it as a foreign actor other than Russia.

Where Were Emails Going?

According to Gohmert, inspector general investigator Frank Rucker and attorney Janette McMillan relayed the lead during a meeting with four FBI officials, including Strzok and Dean Chappell.

The Judicial Watch lawsuit seeks to force the release of documents it has sought since July 2018, which include all records and communications related to the meeting between the FBI and the ICIG.

“Our lawsuit could further expose how anti-Trump activists like disgraced FBI official Peter Strzok bent over backward to protect Hillary Clinton from having to answer for her national security crimes,” Judicial Watch President Tom Fitton said in a statement. “The scandal of the illicit Trump spying is directly tied to the Deep State protection of Hillary Clinton.”

Despite the alarming nature of the lead, several senior FBI officials involved in the Clinton email probe claimed to have no memory of the referral. According to a review of transcripts of House testimonies, some of which haven’t yet been released to the public, senior FBI officials, including Strzok, Lisa Page, Bill Priestap, Jonathan Moffa, John Giacolone, and James Comey, all claimed to remember nothing about the ICIG referral.

Every official above Strzok in the chain of command was, at different times, either moved to other investigations or offices and some retired before Comey ultimately concluded the probe by publicly exonerating the former secretary of state. At least two of the three officials who reportedly attended the ICIG meeting with Strzok were also moved from the probe before it concluded.

President Donald Trump—who as commander in chief has unlimited access to classified information—suggested in August last year that Clinton’s emails were obtained by China.

“Hillary Clinton’s Emails, many of which are Classified Information, got hacked by China. Next move better be by the FBI & DOJ or, after all of their other missteps (Comey, McCabe, Strzok, Page, Ohr, FISA, Dirty Dossier, etc.), their credibility will be forever gone!” he wrote on Twitter.

The president was likely responding to a report released days earlier by the Daily Caller, citing two anonymous sources, claiming that a Chinese-owned company operating in the Washington area obtained nearly all of Clinton’s emails.

The firm received Clinton’s emails in real time using a code embedded on a private, unauthorized email server she used for government work while she was secretary of state, the report alleged. Fox News confirmed the Daily Caller report, citing two anonymous sources. It isn’t clear if the Fox sources are different from those used by the Daily Caller.

Notably, two of the other FBI officials who likely attended the meeting with the ICIG had expertise in Chinese espionage, a factor which may have initially contributed to their selection for the Clinton email team. Chappell, an FBI section chief, was cited among experts on Chinese espionage in a Fox News article published two weeks after the start of the Clinton email probe. Counterespionage Section Chief Charles Kable, who may also have attended the meeting, led investigations against “known and suspected Chinese intelligence officers in the U.S.” for a year and five months starting in 2009, according to an FBI promotion notice and his LinkedIn profile.

When contacted for a comment about the allegation that FBI ignored the lead, Chuck McCullough, who served as the ICIG at the relevant time, said he never alleged that the FBI ignored any leads.

“Having spent 10 years of my life as an FBI special agent, I presumed they would take appropriate action with respect to whatever information I gave them. I did not follow up with them to ensure that was the case,” McCullough told The Epoch Times on Jan. 29.