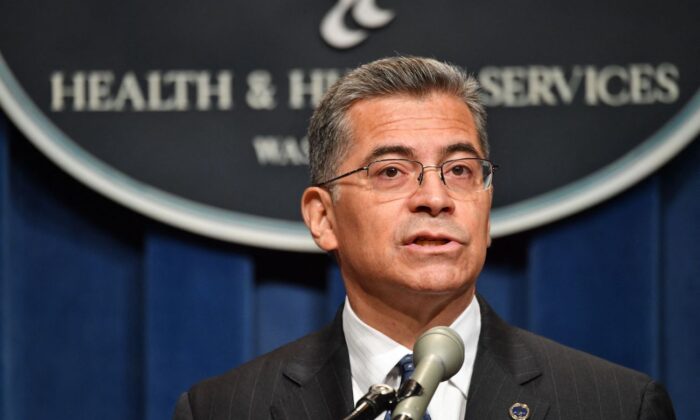 Xavier Becerra, Secretary of Health and Human Services speaks during a press conference at the HHS headquarter in Washington, on June 28, 2022. (Nicholas Kamm/AFP via Getty Images)
By Zachary Stieber

A watchdog is seeking records from the government on its inconsistent COVID-19 vaccine recommendation.

Biden administration officials have for months claimed that a COVID-19 vaccine has become a once-a-year routine. “For a large majority of people, an annual COVID shot should be all they need,” White House COVID-19 response coordinator Dr. Ashish Jha said in September. That same month, White House chief medical adviser Dr. Anthony Fauci compared the cadence to the flu vaccine, which is administered once per year.

But Health Secretary Xavier Becerra, in multiple posts on Twitter, said that people should get a shot “if it’s been over 2 months since your last dose.”

“The recommended timing for COVID boosters has changed many times and is now changing again. At one time, the President, health officials, and many others said that the original COVID vaccine would provide permanent protection. Now our nation’s top-ranking health official is recommending vaccine doses every two months,” the Functional Government Initiative, a watchdog group, told the Department of Health and Human Services in a Dec. 1 request for records to back up Becerra’s advice that was reviewed by The Epoch Times.

The initiative wants any scientific evidence that Becerra relied on when recommending shots every two months, any studies on the effectiveness of bi-monthly shots, and any records showing Becerra discussing the safety of the updated shots.

An HHS spokesperson told The Epoch Times via email: “The clear message from across the Administration is: Don’t wait. Get your free COVID-19 vaccine. It’s safe and effective. People can go to vaccines.gov to find free and easily available vaccines in their community.”

“While Americans are consistently told to ‘trust the science’ when it comes to matters of public health, they are rarely being shown the science underpinning these decisions,” Pete McGinnis, spokesman for the government initiative, said in a statement.

“Going from one shot a year to six shots a year in less than 24 hours without any justifying data leaves Americans confused and concerned with their government’s ability to respond to health crises,” he added. “It could also unnecessarily straddle millions of healthy young Americans with a not-insignificant exposure to myocarditis and little to show for it outside of a boosted vaccine count. The public deserves to know what scientific information—if any—Secretary Becerra reviewed before his recommendation for bi-monthly booster shots was issued.”

After the original vaccines plunged in effectiveness as newer variants emerged, Pfizer and Moderna developed new shots that contain components of both the Wuhan virus and the BA.4/BA.5 subvariants.

U.S. regulators authorized the shots in late August and the U.S. Centers for Disease Control and Prevention (CDC) recommended them for virtually all Americans aged 12 years and up soon after. The authorization and recommendation have since been expanded to children as young as 6 months of age, despite no human clinical data being available for either of the vaccines. The only data on effectiveness that has emerged estimated substandard protection.

The vaccines are primarily being applied as boosters. The old vaccines, or the first two shots, are still being used as the primary series.

Jha and Fauci, for instance, on Dec. 9 suggested they would protect against severe illness, which is unproven.

Fauci did acknowledge that the vaccines are performing worse as time goes on, with waning happening within weeks of administration.

“A lot of people ask us, well you know I got measles vaccine, I got polio vaccine, I never had to get another vaccine of the same type, why we need to do that?” Fauci said. “Other vaccines of the other types give you immunity that is lasting in decades and sometimes a lifetime. Unfortunately, that is not the case with COVID, so we have to keep up with the virus and with the waning immunity. When we do that, we’re going to wind up being safe.”

The CDC currently advises people to “stay up to date” with vaccines.

The CDC says people 5 and older should get one of the updated boosters if at least two months have elapsed since their last shot, even if the last shot was an old booster.

Additionally, even if people received multiple old boosters, they should still get one of the new ones, according to the agency.

“Boosters are an important part of protecting yourself or your child from getting seriously ill or dying from COVID-19,” the CDC says.

The agency cites no evidence to back up its claims.

The only effectiveness data for the new boosters came from the CDC, with researchers estimating from real-world testing data that the boosters provided just 22 to 43 percent protection—depending on age—against symptomatic infection.

U.S. and international standards say vaccines should be at least 50 percent effective to be authorized.

The CDC did not estimate protection against severe illness.

Editor’s note: This story has been updated with a comment from HHS.