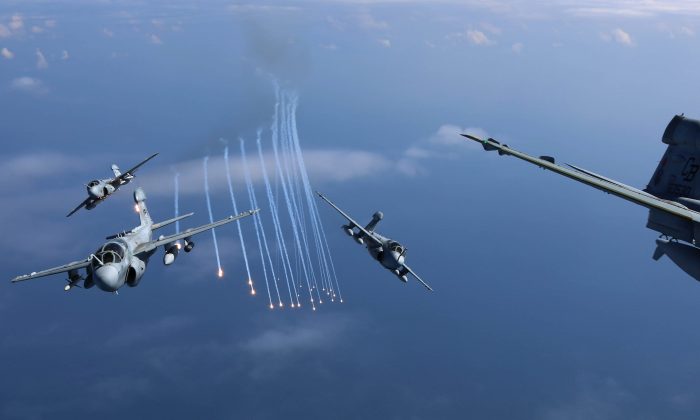 Four EA-6B Prowlers belonging to each Prowler squadron aboard Marine Corps Air Station Cherry Point conducted a "Final Four" on March 1. The flight is the last time the Prowler squadrons will be flying together before the official retirement of Marine Tactical Electronic Warfare Training Squadron 1. (Cpl. Neysa Huertas Quinones)
US

Watch the Marine Prowler Squadrons Take Their Last Flight Together

The U.S. Marines held their “Final Four” flight of its four EA-6B Prowler squadrons on March 1. The flight symbolically marks the end of a generation, as the Marines move towards more high-tech forms of fighting.

The EA-6B Prowler is an electronic warfare plane that has been around since 1968, but is now being replaced by the newer systems, including the EA-18G Growler, unmaned aerial vehicles, ground-based electronic warfare nodes, and other new technologies.

A Prowler from each of the four squadrons joined the flight at Marine Corps Air Station Cherry Point. It was meant to “highlight this platforms legacy,” according to Military.com, before it retires the Marine Tactical Electronic Warfare Training Squadron 1 at the end of the fiscal year.

While the U.S. Navy retired its Prowlers in July 2015, the Marines plan to keep theirs by the end of fiscal year 2019.

It will, however, start transitioning to new forms of electronic warfare under the new Marine Air-Ground Task Force Electronic Warfare (MAGTF-EW) strategy.

MAGTF-EW is an integrated system of different electronic warfare systems, both manned and unmanned, according to the Marine Corps Concepts and Programs website. It says the program will “unite air, ground, and space-based technologies to ensure collaborative, efficient, and effective control of the [electromagnetic spectrum].”

Systems including miltiary communications and satellites use electromagnetic spectrum, and electronic warfare is used to distrupt these systems.