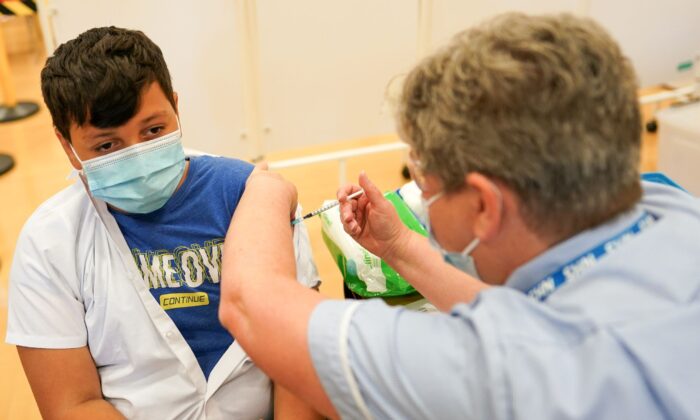 It is a “waste of time” to keep vaccinating people against the CCP (Chinese Communist Party) virus, the former chairman of Britain’s Vaccines Taskforce has said.

Dr. Clive Dix, who played a key role in helping pharmaceutical firms create the COVID-19 vaccines, told LBC radio on Jan. 16: “The Omicron variant is a relatively mild virus. And to just keep vaccinating people and thinking of doing it again to protect the population is, in my view, now a waste of time.”

Dix said the focus now should be on protecting vulnerable people, such as those over 60, 2 percent of whom remain unvaccinated.

“We should have a highly-focused approach to get those people vaccinated and anybody else who’s vulnerable,” he said.

Though he supports the ongoing booster campaign, he said he has been “critical” of boosting everybody as he is not convinced “it was needed or is needed” for younger people.

Dix said, “I think the thinking of the time was very much to stop infection and transmission where clearly these vaccines don’t do that.”

He said the government needs to be “very focused” on educating itself for the “future vaccination programme” next winter.

He suggested that an “immune status study” should be conducted to “understand exactly where everybody’s immunity is,” so that “by next winter, we can really have a policy of vaccination that’s educated, using the right vaccines at the right time for the right people.”

Dix told The Observer newspaper last week that mass vaccination against COVID-19 should come to an end and the UK should focus on managing it as an endemic disease like flu.

“We now need to manage disease, not virus spread,” he said. “So stopping progression to severe disease in vulnerable groups is the future objective.”

The UK government’s medical advisers have already acknowledged that it is “untenable” to jab the population every three or six months.

Sir Patrick Vallance, the UK’s chief scientific adviser, said on Jan. 3 that it is not the government’s “long-term view” to give everyone a booster vaccine every few months.

Professor Andrew Pollard, director of the Oxford Vaccine Group and chair of the government’s Joint Committee on Vaccination and Immunisation (JCVI), told The Telegraph that it’s “not sustainable or affordable” to “vaccinate the planet every four to six months.”

On Jan. 7, the UK government’s vaccination advisory committee recommended against giving a fourth dose of COVID-19 vaccine to nursing home residents and people over 80.