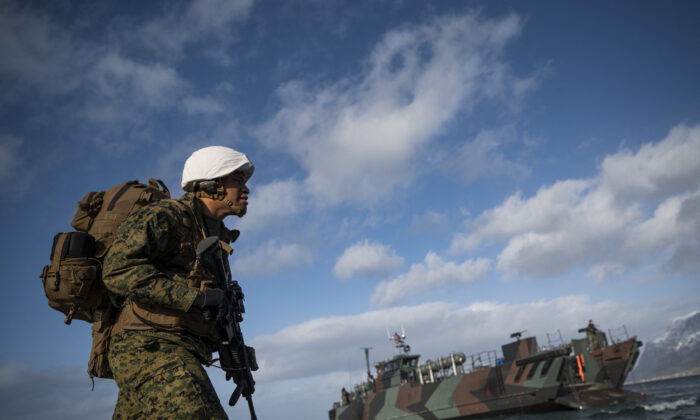 A U.S. soldier from the 3rd Battalion, part of the 6th Marine Regiment, participates in the international military exercise Cold Response 22, at Sandstrand, Norway, on March 21, 2022. (Jonathan Nackstrand/AFP via Getty Images)
Russia-Ukraine War

US Sending Marines to Lithuania, Deploying Aircraft in Germany, and ‘Liaising’ With Ukrainian Military

The United States is repositioning 200 Marines to Lithuania from Norway as part of Washington’s response to Russia’s war in Ukraine.

Pentagon spokesman John Kirby told reporters on March 29 that the Marines were in Norway for military exercises and are part of Marine Air Control Group 28, based in Cherry Hill, North Carolina.

An unspecified number of C-130 Hercules aircraft and about 10 F-18 Hornets stationed at the Marine Corps Air Station in Beaufort, South Carolina, also will head toward Eastern Europe.

The announcement comes a day after the Pentagon announced that it was deploying six U.S. Navy EA-18G Growler aircraft from the VAQ-134 squadron based at Naval Air Station Whidbey Island, Washington, to Germany.

The purpose of the deployment is to “bolster readiness,” boost the “collective defense posture” of NATO, and “improve air integration capabilities with America’s allies,” according to Kirby.

“They are not being deployed to be used against Russian forces in Ukraine. They are being deployed completely in keeping with our efforts to bolster NATO’s deterrence and defense capabilities along that eastern flank. The deployment is not in response to a perceived threat or incident,” Kirby said in a March 28 statement.

Russia has promised to scale down military operations near the Ukrainian capital of Kyiv and the city of Chernihiv. But Kirby dismissed the claim, saying that the Russians are only “repositioning” and not really leaving.

“Has there been some movement by some Russian units away from Kyiv in the last day or so? Yeah. We think so. Small numbers,” Kirby said during a March 29 press briefing. “But we believe that this is a repositioning, not a real withdrawal and that we all should be prepared to watch for a major offensive against other areas of Ukraine.”

He added that a real, believable commitment would involve the full withdrawal of the Russian military from Ukraine.

The Russian attack on Chernihiv actually intensified instead of softening, amid Moscow’s assurances, according to the city’s mayor, Vladyslav Atroshenko.

The renewed attacks are “yet another confirmation” that Russia “always lies,” Atroshenko told CNN. More than 100,000 people are trapped in the city, with just enough food and medical supplies to last one more week at most.