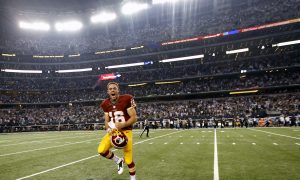 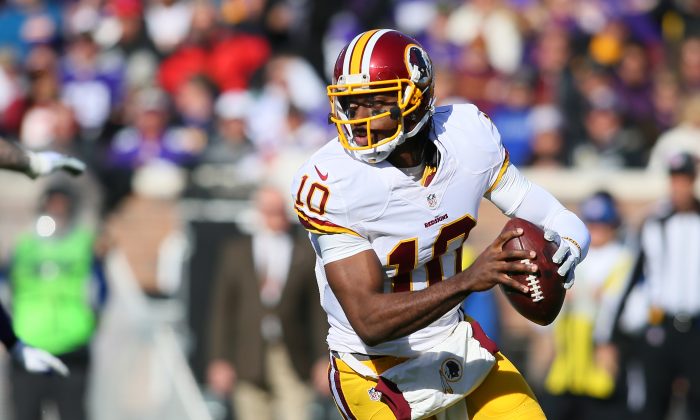 Robert Griffin III #10 of the Washington Redskins looks to pass the ball against the Minnesota Vikings during the first quarter on November 2, 2014 at TCF Bank Stadium in Minneapolis, Minnesota. (Photo by Adam Bettcher/Getty Images)
NFL

The Washington Redskins are taking the bye week to prepare for the rest of the season as more news and rumors emerge.

Griffin Having Trouble With Timing

Some fans have noted how Kirk Cousins and Colt McCoy seemed to have a better grasp of the Redskins’ offense, and wonder whether Robert Griffin III is unfamiliar with the plays.

But Washington Post‘s Mike Jones says that the problem is of trusting the offense and receivers.

“The problem isn’t a lack of understanding or knowledge of the playbook. The indecisiveness involves confidence and a feel for the pocket and anticipation. Griffin knows the offense inside and out and can spit out whatever verbiage and, and he knows where receivers are supposed to go. But, he doesn’t always trust his eyes and the concepts of the system, he said.

“He’s a perfectionist, which is good, but that can also hurt you if you’re a quarterback running a timing-based offense. This scheme is designed for a quarterback to hit his drop-backs and boom, get the ball out. The receiver, if he runs his route correctly, will get to the spot at the same time the quarterback completes his drop-back and throws the ball.

“Sometimes a receiver may not exactly look like he’s open yet, but the quarterback has to hit that final step of his three-, five- or seven-step drop and deliver the ball to the spot (leading the receiver), trusting that his target will get there. Because he doesn’t want to throw an interception, Griffin will hesitate and will hold on to the ball half-a-beat (or two or three) longer, but on many plays, you can’t afford to do that. Obviously, if the defender has better position on the pass-catcher, you have to go elsewhere. But it’s a fine line.”

Griffin understands why coach Jay Gruden says that the Redskins quarterback situation is up in the air but feels confident that he’s the team’s franchise quarterback.

“There’s no doubt there,” Griffin said, reported ESPN. “This is my team and I’m going to lead it.”

Gruden said on Monday following the loss to the Minnesota Vikings that the team will closely evaluate Griffin through the end of the season before deciding whether to offer him a fifth year extension.

“What he’s saying is, ‘Coming into this year, everybody has got a clean slate. Everybody has to prove why they should be here,'” Griffin said.

“And I haven’t been out there. Availability is the key, so my job is to continue to go out there, get better each week, help this team win and the rest will take care of itself. I don’t take that in any kind of way negatively.”

McCoy Back as Backup

Colt McCoy has found himself back as a backup to Robert Griffin III after leading the Redskins to a narrow win over the Dallas Cowboys the Sunday before last.

McCoy, 28, says he understands what he’s supposed to do.

“I’m going to continue to be a great teammate and support the decisions that are made and support Robert and do my best to help him as much as I [can] during the week and during the game,” McCoy told the Washington Times.

Gruden has faced questions about whether he should have started McCoy against the Vikings and let Griffin recover more and McCoy try for another win but Gruden has said that Griffin will start when he’s healthy.

“We get a good look at Kirk [Cousins]. We get a good look at Colt and now it’s back to Robert,” Gruden said Monday. “So, the jury is still out on that position. But we feel good about Robert’s progress so far and we’ve just got to continue to build and see how he does from week-to-week-to-week and hopefully we can see that here at the end of the season.”

McCoy said that he handled his responsibility when he stepped in and played but that he’ll support the decision and continue to be a leader with the team.