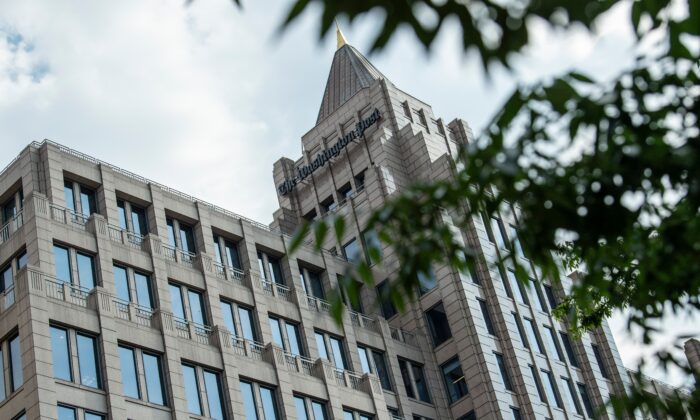 The building of the Washington Post newspaper headquarter is seen on K Street in Washington on May 16, 2019. (Eric Baradat/AFP via Getty Images)
Politics

A Washington Post “fact-check” about a claim by Sen. Tom Cotton (R-Ark.) was updated this week after the government revealed convicted Boston bomber Dzhokhar Tsarnaev received a stimulus check.

Cotton said last year that prisoners like Tsarnaev would get stimulus checks if an amendment to a COVID-19 relief package weren’t approved.

Even though Cotton was correct, The Washington Post, owned by Amazon founder Jeff Bezos, initially said his claim and a similar one from Sen. John Barrasso (R-Wyo.) lacked “significant context.”

“Cotton and Barrasso claim Democrats are actively trying to give stimulus checks to murderers and undocumented immigrants,” Glenn Kessler of the Post wrote. “Not only is that wrong, but both voted for previous stimulus bills that did not have narrowed criteria. The goal was to get checks out as quickly as possible without burdensome regulations. It’s hard to craft rules that target mass murderers without also penalizing the families of people in prison for much less heinous crimes.”

Kessler updated the piece Thursday, after a government filing showed Tsarnaev received money from the government.

Kessler said his use of the word “scaremongering” to describe Cotton’s comments “was inappropriate” and that the senator “raised a legitimate issue of concern, even if he framed it in a political way.”

“The term ‘hyped up’ in the headline went too far as well,” the writer added.

He changed the “rating” of the “fact-check” from two Pinocchios to one.

Cotton took to Twitter to note that every Democrat senator voted against his amendment that would have blocked prisoners from getting stimulus checks.

Both he and a spokesman asked the Post to update its article.

“You portrayed Senator Cotton’s amendment as pure political theater—’not serious legislation’—warning of an outcome that, according to your article, was very unlikely to happen,” the spokesman said. “Now that it has in fact happened, we’re asking that you update your story to include that Senator Cotton’s concerns did come true and that his amendment would have prevented it.”

The Post previously updated a different article, portrayed as a news piece, that claimed the idea that the virus that causes COVID-19 came from a Chinese lab was a “debunked conspiracy theory.”

The paper used the piece to attack Cotton, who noted during a television appearance in early 2020 that officials did not know where the virus originated.

“Earlier versions of this story and its headline inaccurately characterized comments by Sen. Tom Cotton (R-Ark.) regarding the origins of the coronavirus. The term ‘debunked’ and The Post’s use of ‘conspiracy theory’ have been removed because, then as now, there was no determination about the origins of the virus,” the paper stated.