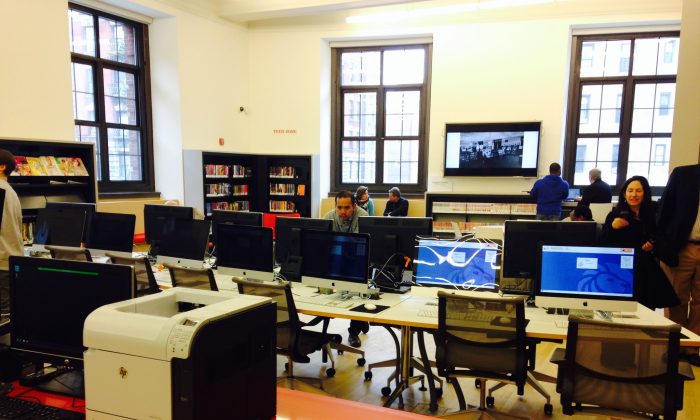 The $12.4 million extensive gave the branch a modern and accessible interior, with a newly installed glass elevator and an entrance ramp. Prior to the upgrade, the branch only had stairs and could not accommodate people with disabilities. It was also inconvenient for many elders. Now all three available floors are reachable by elevator.

“I grew up about a mile and a half away from here and I’ve been hearing about the need for an elevator in this building from my mom and my neighbors for too long,” said New York Public Library President Tony Marx at the library’s ribbon cutting. “This is a great day to give everyone the elevator so everyone can enjoy this building.”

The second floor of the library is entirely dedicated to children’s books. The space is one of the largest children’s rooms in the New York Public Library system. It was completely redesigned in the renovation to let in more light and create an area for computers. More open space was created at the center of room where students can study and read, and more shelving was added to accommodate a larger collection of books. The library serves eight schools in the area.

“This community is very large and when we were open before, the children’s room, as large as you see it, was always full of children doing homework assignments. And we’re expecting more people this time,” said Vianela Rivas, Washington Heights Library Manager.

The branch now has 25 PCs, 16 laptops, and 24 macs available to the public, more than triple the number of computers it had before. It is now the third branch in the public library system to have Mac computers. Many of these computers are situated on the first floor of the library, designed to serve adults and teenagers.

Now a century old, the library is one of the original 67 branch libraries that Andrew Carnegie built for the New York Public Library System.

The renovation also added large windows on both the first and second floor to let in more natural light.

“The fact of the matter is, when you have this kind of light, no matter where you live or where you go to school, you want to come to the library,” said Manhattan Borough President Gale Brewer.

Washington Heights residents are thrilled to get their library back. Steven Silverstein who only lives a block away said that he plans on taking his son to the library every day.

“He’s been waiting for it to be open,” said Silverstein. “I’ve lived here 14 years, the library has been closed four years, so it’s been much missed. We’re really thrilled to have it back.”