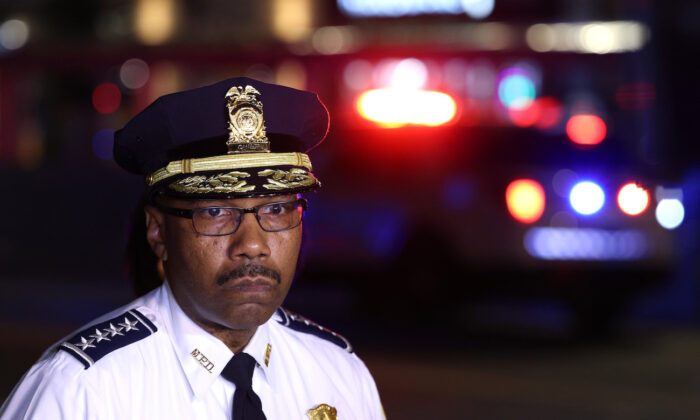 Washington D.C.’s chief of police said the city’s criminal justice system is too lenient on criminals and is now contributing to a recent spike in crime that included a shooting near the popular Logan Circle this week.

“The justice system that we have right now is not functioning the way that it should,” Contee told reporters on Thursday. “The courts are not open. That is a fact.”

Throughout 2020, he said, violent criminals “have not been disposed of” and are now in the “community” rather than in jail or prison.

“The real issue is, we have a vicious cycle of bad actors who do things, no accountability, and they end up back in community,” Contee said. “I guarantee you, when we lock up whoever did this, they will be no stranger to us.”

Over the past year or so, left-wing activists have called for “defunding the police” amid an escalation of anti-police rhetoric. Some cities, including Washington in June 2020, went through with such policies and cut funding to their departments.

Courts across the United States have seen operations cut due to the COVID-19 pandemic.

“You cannot. You cannot treat violent criminals who are out here making communities unsafe for you, your loved ones … They might not want a job. They might not need services. What they may require is to be off of our streets because they’re making it unsafe for us … If not, then we see more of this,” he added Thursday.

Video footage from the Logan Circle incident showed people seated at restaurants as gunfire rang out. Police haven’t yet identified suspects in that case.

Days before that, three people were injured in a shooting near Nationals Park during a Major League Baseball game. That incident sent both players and fans scrambling for cover, according to footage posted online.