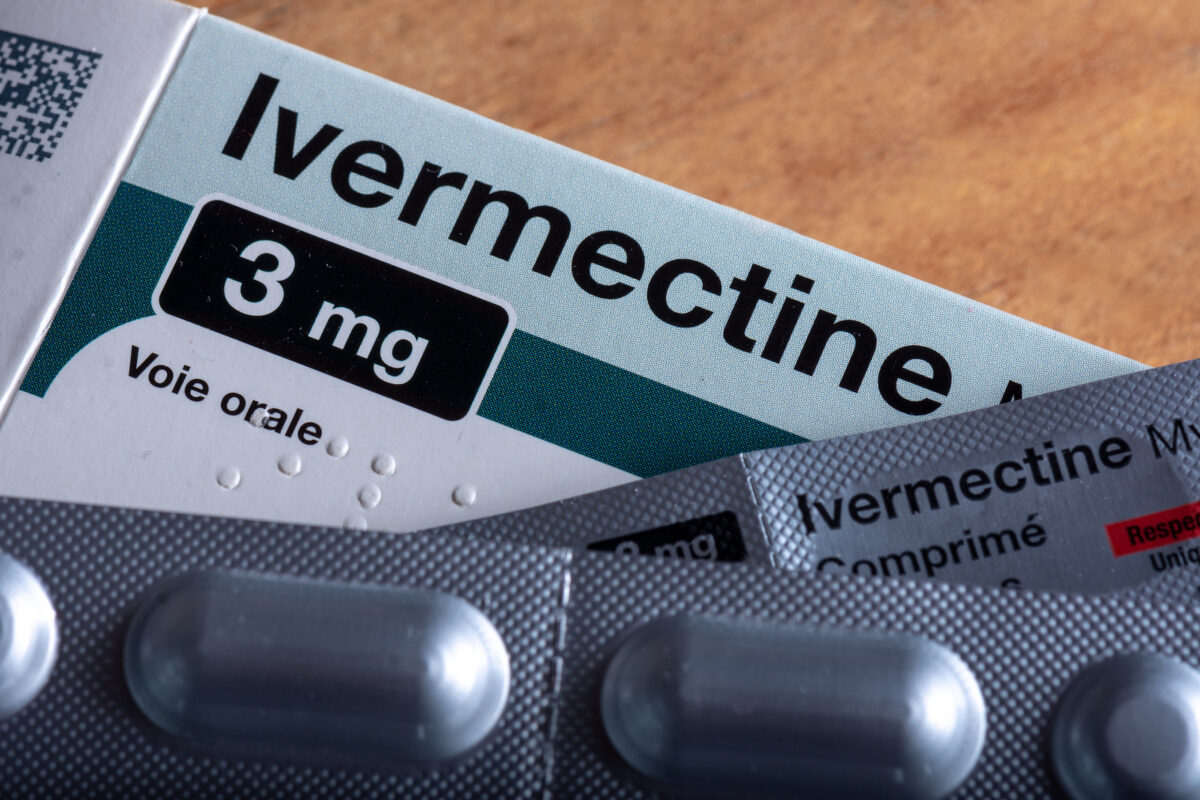 Research into ivermectin suggested it held promise as a treatment for COVID-19, at least until a controversial review deemed otherwise.(HJBC/Shutterstock)
Covid

Was Ivermectin Unfairly Torpedoed as Treatment for COVID-19?

Controversy seems to surround virtually everything connected with COVID-19: masking, social distancing, vaccines. Amid this quagmire of controversy, one of the most fraught questions has been whether the medication ivermectin is nothing more than dangerous snake oil or is actually a safe and effective treatment for the virus.

The mainstream media and conventional medical doctors have generally derided ivermectin, referring to it as a “horse de-wormer.” Patients are cautioned against taking it, doctors who are willing to prescribe it report being investigated by their licensing boards and even fired from their jobs. Patients are warned that ivermectin is “dangerous” and “ineffective.”

According to the FDA, it “has not authorized or approved ivermectin for the treatment or prevention of COVID-19 in people or animals. Ivermectin has not been shown to be safe or effective for these indications.”

At the same time, ivermectin is a well-known antiparasitic that hundreds of millions of people, mostly in Africa and Asia, have taken since it first became available in 1981, according to research published in the Proceedings of the Japan Academy. It has been especially effective at combating a disease called river blindness, which is caused by Onchocerca volvulus worms and transmitted via blackfly bites.

In fact, ivermectin is considered so safe that it’s sold over-the-counter in many countries, or even distributed free. The two scientists who developed the drug, Drs. William C. Campbell and Satoshi Omura, shared the 2015 Nobel Prize in Medicine with another scientist who developed an effective way to fight malaria.

When the COVID pandemic was raging, scientists naturally sought drugs that could be repurposed to fight the SARS-CoV-2 virus. Ivermectin made the list of potential treatments because it exhibited antiviral capabilities, and some doctors in developing countries had noticed that patients on preventative ivermectin for parasites fared better with COVID.

One particularly promising study, published by a team of researchers in Australia in June of 2020, found that a single dose of ivermectin was able to reduce replication of SARS-Co-V-2 by 5,000-fold in vitro (that is, in test-tube experiments).

However, it was initially thought that very high doses would be required for the drug to be effective against viral infection in humans.

Yet small clinical trials began reporting surprisingly good results. Indeed, some of these early trials reported effective treatment for both mild cases of COVID-19 and more severe, hospitalized patients. It seemed that the drug’s anti-inflammatory effects might be more important than its antiviral capacities when it came to treating people with COVID-19.

In an article dated May 1, 2021, award-winning journalist Michael Capuzzo reported that President Donald Trump was treated with ivermectin when he contracted COVID. (When I contacted him to confirm this information, Capuzzo wrote me back that he couldn’t reveal his source but that it was someone close to the president.)

When popular podcaster and comedian Joe Rogan tested positive for COVID in September of 2021, he threw “the kitchen sink” at it. Among other treatments, he took ivermectin, which he has since credited with helping him recover from the virus in just a couple of days.

All the positive buzz about ivermectin abruptly ended, however, with a Cochrane review published in July 2021 that was categorically critical of the drug. Making headlines around the world, the review concluded that, “Current evidence does not support using ivermectin for treating or preventing of COVID-19 unless they are part of well-designed randomized trials.”

A closer look at this research reveals, however, that the conclusion makes claims beyond the data amassed by the study itself. The language of the review studiously avoids any determination about ivermectin’s effects, repeating the words “We are uncertain whether” and underscoring the “uncertainty” that ivermectin can do what some of the trials argued it could do a whopping 38 times.

The Cochrane review was a meta-analysis: a study that combines and examines data from other studies to essentially act as one overarching study. The analysis included 14 randomized controlled trials with a total of only 1,678 participants. N = 1,678 is a very low number.

Despite that, several of the included studies indicated very good results from using ivermectin (including a reduction of all-cause mortality of 40 percent compared to that of the placebo group and a reduction of the need for invasive mechanical ventilation of 45 percent) to combat COVID-19.

The reviewers dismissed these promising results with the claim that they were “very low certainty” because of potential bias and that the number of participants, 185, in the trial was so low. It’s true that the results didn’t reach statistical significance, but that alone is not an adequate reason to discard the results.

Cochrane has long been considered the gold standard in international unbiased research. However, in recent years, their research has often been sponsored by entities with conflicts of interest.

In 2016, Cochrane received $1.15 million from the Bill and Melinda Gates Foundation, prompting concerns among Cochrane’s board that taking the money would compromise Cochrane’s mission. The furor resulted in the firing of one board member and the resignation of four others, and many believe the Gates funding significantly affected the quality of Cochrane’s subsequent reviews, most notably of the safety and efficacy of the HPV vaccine.

In 2018 article, “Cochrane—A sinking ship?” published in the British Medical Journal, science reporter and a researcher Maryanne Demasi, Ph.D., lamented Cochrane’s shift towards a commercial business model approach and “away from its roots of independent, scientific analysis and open public debate.”

The ivermectin review was funded by the United Kingdom, but was carried out by members of the German research project CEOsys (COVID-19 Evidence-Ecosystem). Both are government entities that, like the U.S.’s Centers for Disease Control, have staked public health—and their credibility—on a vaccine solution.

What may be most important in the Cochrane review was what was left out. Their review didn’t include an analysis of at least 49 other studies that could shed light on this issue. According to the authors: “We identified 31 ongoing and 18 studies awaiting classification until publication of results or clarification of inconsistencies.”

At the same time, another meta-analysis, published four months earlier, in March of 2021, included 18 randomized controlled trials that showed very positive results for ivermectin intervention. But many of the studies were not yet published, and this meta-analysis included one retracted trial. However, the scientists address the difficulty of combining disparate study designs into something that can justify a cohesive conclusion, mentioning the fact that meta-analyses “are prone to confounding issues.”

While it’s generally accepted that meta-analyses, such as Cochrane routinely performs, are the “gold standard” in data-driven research, many critics point out that they are actually quite easy to manipulate as well as prone to compounding the errors of the underlying studies.

In their 544-page book, “Introduction to Meta-Analysis,” statistician Michael Borenstein, Ph.D., and his team outline some of the more significant problems associated with meta-analyses:

“The goal of a meta-analysis should be to synthesize the effect sizes, and not simply (or necessarily) to report a summary effect,” they explained. “If the effects are consistent, then the analysis shows that the effect is robust across the range of included studies …. If there is substantial dispersion, then the focus should shift from the summary effect to the dispersion itself.”

The studies included in Cochrane’s meta-analysis were by no means consistent, yet that fact was largely ignored in the analysis when it should have been the main topic of discussion.

“I have treated hundreds of COVID patients successfully with Ivermectin as part of a larger treatment protocol,” wrote Jeffrey Barke, a medical doctor based in southern California, in an email. “I have not seen a single adverse reaction to ivermectin. It’s a safe drug. And when used early in the course of COVID-19, ivermectin … works.”

However, Barke continued, it is difficult to procure.

“Unfortunately, many brand-name pharmacies are refusing to dispense this safe, potentially life-saving medication. It’s easier for me to prescribe oxycontin than ivermectin,” he wrote.

Barke is not alone. Many doctors all over the world have anecdotally reported getting good results using ivermectin, especially when administered at the first signs of infection.

Getting accurate data on ivermectin’s efficacy (or lack thereof) is tricky, however, because many places where it is being used to seemingly good effect, including Mexico City (where nearly 200,000 kits with ivermectin were distributed) and Delhi, haven’t been running placebo-controlled trials.

According to Dr. Robert Malone, an internationally recognized physician and biochemist and one of the original inventors of mRNA vaccination technology, who has worked as a vaccine developer and government public health insider for more than 40 years, “prophylactic use of ivermectin saves lives.”

Analyzing data from a controlled study done in Brazil of over 223,000 people in an article on Substack, Malone concludes: “The results of this study clearly demonstrate that prophylactic use of ivermectin must be initiated immediately for people in high risk categories in the United States and worldwide.”

At the same time, results from two recent clinical trials, one in Malaysia and one in Italy, found that adding ivermectin to the normal course of therapy seemed to show no benefit and also no harm.

Yet another meta-analysis, just published on March 21 of 2022, examined studies done on ivermectin and COVID-19 to analyze why some showed that patients receiving ivermectin did better than controls, while other studies showed no benefit. According to these authors, the difference in how COVID-19 patients on ivermectin did varied depending on whether the patients lived in an area in which a certain type of worm was prevalent or not.

It may seem counterintuitive, but this study found that people in areas with widespread infection from nematode worms of the genus Strongyloides didn’t get as sick from COVID-19. Perhaps because their immune systems, busy fighting parasitic worms, did not overwhelm them with cytokine storms.

We don’t think of worm infections as beneficial. But this research dovetails with results of a recent study from Ethiopia published in the Lancet. Of the 751 patients who were infected with SARS-CoV-2, those who had intestinal parasites (either worms or protists) tended not to progress to severe disease. Eleven patients in this cohort died. But none of deaths occurred in people who had parasites.

Juan Chamie, senior data analyst for the Front Line COVID-19 Critical Care Alliance, a non-profit organization founded by medical doctors that is dedicated to developing effective treatment protocols to prevent the transmission of COVID-19 and to improve outcomes for sick patients, has been tracking the use of ivermectin to combat COVID across the globe since May of 2020.

Chamie has compiled all the data into a striking series of charts, published on the FLCCC website, that show that localities that introduced ivermectin as a part of their treatment protocols saw significant drops in their COVID rates, perhaps as a result.

If Chamie’s analysis is correct—and that’s a very big if—the outright dismissal of a low-risk, inexpensive, potentially preventive treatment with a long record of safety could be the single most deadly, not to mention unethical, policy error of this pandemic.