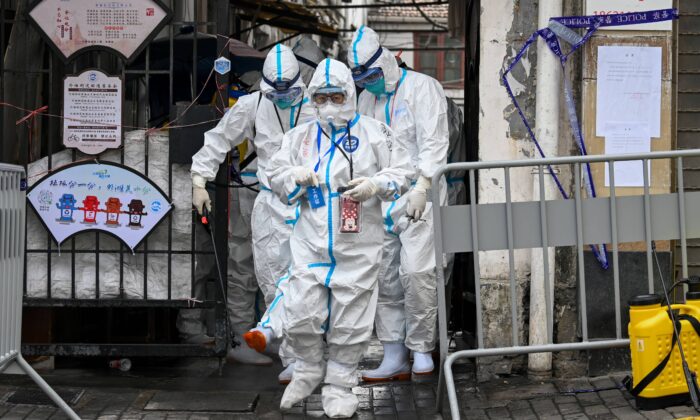 Health workers in protective gear walk out from a blocked off area after spraying disinfectant in Shanghai's Huangpu district on Jan. 27, 2021, after residents were evacuated following the detection of a few cases of COVID-19 coronavirus in the neighborhood. (STR/AFP via Getty Images)
INSIDE CHINA

China is seeing its worst CCP virus resurgence in months as the Lunar New Year approaches. During the annual holiday, tens of millions travel across the country, crowding buses, trains, and planes, to reunite with their families. But this year, dozens of Chinese provinces and cities are urging against “unnecessary trips,” telling people to stay where they are while imposing quarantine measures to contain the virus.

At daily virus press briefings, officials have spread theories about imported cases seeding local outbreaks and people getting infected through frozen food packaging—though disease experts have said the risk of infection through viral material on food packaging is very low.

The number of reported cases is still small compared to those in Western countries, but the Chinese communist regime’s history of downplaying crises while prioritizing its image has led critics and residents to question whether they are hearing the truth. Some regions’ enforcement of virus containment measures has also given rise to concerns that people’s basic rights are being violated.

The Epoch Times here compiles key details, collected through interviews with locals in areas that have experienced the most severe outbreaks, in an effort to present a more complete picture of China’s current epidemic.

The year 2021 began with a surge of CCP (Chinese Communist Party) virus infections in northern China’s Hebei Province, concentrated in the provincial capital of Shijiazhuang. The city was quickly placed under “wartime mode” on Jan. 3 after local authorities announced about a dozen new COVID-19 cases. Schools were closed, and local public transportation was suspended.

Within days, the city saw a full-blown outbreak, with at least hundreds of new cases reported. Local authorities mandated testing for millions of people.

However, the mass testing didn’t calm Shijiazhuang residents’ nerves. A resident surnamed Guo (a pseudonym) complained that health officials weren’t changing gloves or carrying out proper disinfection procedures while taking swab samples. He said there was also panic among the people, as worry set in over financial losses and food shortages resulting from lockdowns in multiple counties and districts in the city. In some areas, people could only leave their homes every few days to go out shopping for basic necessities.

“Now, Shijiazhuang is under a form of white terror,” Guo said, referring to authorities’ heavy-handed suppression of citizens. “There is nothing to be afraid of about the epidemic. What is scary is that people have lost their freedom.”

At one point, about 20,000 villagers in Zengcun, one of the towns in Shijiazhuang, were asked to leave their homes and transfer to makeshift quarantine centers, such as schools and hotels, as local authorities tried to stem the spread of the virus.

Three other cities in Hebei Province—Nangong, Xingtai, and Lanfang—have all been subjected to harsh lockdown measures.

The outbreak in Hebei continues to be of great concern. On Jan. 19, China’s state-run media Xinhua reported that a makeshift quarantine center with 500 rooms was being built at Longyao, a county in Xingtai city.

The construction of another makeshift quarantine center in Nangong, equipped with 2,600 rooms, was completed on Jan. 23, according to another Xinhua article.

In northern China’s Heilongjiang Province, authorities in Heihe city, which is located near the Russian border, began reporting a few new cases at the end of December.

Unexpectedly, city officials in Heihe placed the city under “warlike mode” on Jan. 2. Since then, infections have been reported in multiple cities across the province, including Qiqihar, Yichun, Daqing, Suihua, and the capital city of Harbin.

Wangkui county, which is under the jurisdiction of Suihua, is among the hardest-hit. County officials have placed all communities under “seal-off management”—meaning no one is allowed to leave their homes—and began mass testing of locals.

Mr. Chen, a resident of Ang’angxi district in Qiqihar, told the Chinese-language Epoch Times in a Jan. 21 phone interview that he hadn’t left his home for more than a week because of local government measures to prevent the spread of the virus. He said that his community had been under lockdown since Jan. 12.

Chen Xin (a pseudonym), a Harbin resident, told The Epoch Times that local meat and egg prices had skyrocketed recently due to the local outbreak. He added that there was a lack of trust in Chinese-manufactured COVID-19 vaccines because there have been accounts of people experiencing bad side effects after being inoculated. He believed that the actual number of infections in his city was likely much higher than local officials were reporting.

Jilin, which borders Heilongjiang to the south, blamed a superspreader originally from its neighbor for sickening a total of 144 locals and starting the latest wave.

The 45-year-old man, surnamed Lin, was said to have made frequent trips between multiple cities in the two provinces recently to promote linseed oil to elderly people, according to the Jilin provincial health commission. He contracted the virus from infected passengers during a train trip on Jan. 5 and shed the virus during two subsequent marketing lectures in the cities of Gongzhuling and Tonghua, officials said.

The two cities went into immediate lockdown. On Jan. 21, Tonghua officials began sealing off residents’ doors in the worst-hit district to prevent people from going out, and offered a 5,000 yuan ($773) reward to anyone who spotted violators. In a move similar to those seen in Wuhan—the first place in the world to enact a lockdown—authorities swiftly punished local officials to quell public anger. Eight local officials in Tonghua city received warnings or a one-year probation, while six others were removed from their positions.

The draconian measures and a lack of transparency in official announcements have led to public fear.

“The government doesn’t allow you to casually post or circulate anything about the outbreak. A lot of [WeChat social media] groups have been suspended,” a Tonghua resident who gave her last name as Tan told The Epoch Times. In her neighborhood compound, the utilities management workers were not allowed to come clear away snow, she said. “We have to take the government version as the standard, but the reality should be worse.”

The abrupt lockdown, on some occasions imposed before an official announcement, led to a food crisis. Locals left so many enraged comments online that the city mayor apologized on Jan. 24 and promised to provide grocery packages at reduced prices, although some residents complained that they have not received these packages.

While authorities have consistently blamed imported frozen foods as the source of outbreaks, some residents have dismissed the theory. “They keep saying there are foreign-origin cases, but I don’t trust it,” said Mr. Zhang, a supply-chain worker in Changchun city in Jilin. “The virus broke out from Wuhan and has never stopped since last year.”

Beijing authorities have blamed recent outbreaks on people who traveled outside the mainland.

Clusters of local infections have been emerging in Beijing since at least Dec. 14, months after officials declared victory over last summer’s outbreaks. City officials identified the first patient as a 27-year-old worker from Hong Kong who tested positive for the virus following a mandatory 14-day quarantine. Officials said the man spread the virus to two workers at a Chinese bun shop who stayed in the same hotel where the man was quarantined. The Beijing Center for Disease Control and Prevention said the patients had contracted the mutated viral strain first found in the UK, called B.1.1.7.

Then, in late December, the city reported more than a dozen patients in the district of Shunyi, which it traced to a person from Indonesia. The youngest patient in the district is only 8 months old.

Local complaints arose over changing policies and indiscriminate quarantine measures. After a local district reported three infections, hundreds of residents were sent to a quarantine center on Jan. 23 as a precautionary measure, without being told when the quarantine might end, according to Mr. Li, a Beijing resident. The quarantine hotel bolted down room windows with nails, likely in an attempt to prevent escapes, which caused many people to feel suffocated, he said.

The city, which began administering vaccinations this month, said 1.9 million had received the first dose as of Jan. 19. But many residents didn’t show much faith in the campaign, citing the regime’s lack of transparency in vaccine data and a slew of past vaccine scandals.

“Definitely can’t get the vaccine,” said retired doctor Ms. Xia from Chaoyang district. She said many medical doctors she knows also don’t intend to get the shot.

Dr. Wang, also from Beijing, noted that all currently developed Chinese vaccines are only for people aged 18 to 59, which strikes him as unusual.

“Perhaps they [authorities] are afraid that the elderly will have more adverse reactions and discourage people [from taking the vaccine], so they will vaccinate the group that is less likely to have reactions,” he said. “It suggests that the vaccine safety is not up to par, and even authorities themselves lack the confidence.”

Until recent days, Shanghai authorities have been reporting few to no local infections, laying the blame on foreign imported cases for the frequent flare-ups.

Yet videos that locals sent to The Epoch Times showed scenes reminiscent of the early days of the Wuhan outbreak last year. A train station staff member said he has seen multiple passengers, elderly and young alike, suddenly collapse to the ground. Rumors abound that they were victims of the virus.

These days, the number of commuters riding trains is less than half of regular traffic, he said.

“A lot of the frontline train station crew are quitting,” he said, adding that many workplaces, grocery stores, and shopping centers in Shanghai have been checking people’s temperatures upon entry, along with scanning two cell phone codes that track their overseas trips and health statuses in the past two weeks.

“As residents, there’s a sense that the virus may have already exploded, just that the city government strictly controls any reporting on it,” he said, adding that a friend disappeared after posting photos related to the outbreak on WeChat. The friend’s account was also suspended.

Like in Beijing, officials in heavy-hit districts have transferred thousands of local residents to quarantine sites.

“It feels like sitting in jail,” Shanghai resident Ms. He said of such experiences. A video supplied by He showed health officials shutting down shops in Baoshan district, resulting in several women getting locked inside a coffee shop moments after they walked in.

Another resident, Ms. Wang, told The Epoch Times: “Right now, we can only reduce outings and wear masks. That’s about all we can do.”