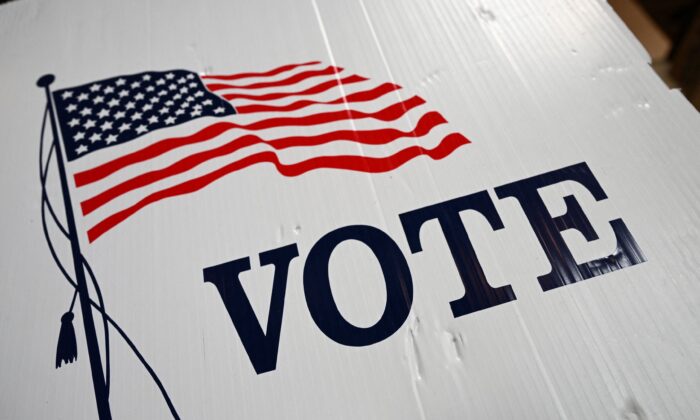 A sign with a U.S. flag is seen at a polling station during early voting ahead of the midterm elections in Los Angeles on Nov. 1, 2022. (Robyn Beck/AFP via Getty Images)
By Michael Washburn

While Democrats and some election observers have raised concerns about the possibility of a so-called red mirage—an appearance of Republican leads in midterm races on election night that will dissipate when mail-in ballots are counted—the real problems with mail-in voting are of a different nature, election experts have told The Epoch Times.

Early voting by mail promotes tribalism within politics and encourages people to vote without knowing nearly all that they could about the candidates and issues, one scholar said.

Some of those raising concerns about the use and misuse of early and mail-in voting have invoked a familiar narrative about Trump-influenced so-called election deniers who are allegedly hostile to, and seek to undermine, democracy itself.

But the real problems with mail-in voting have little to do with the possibility of dishonest attempts to parlay the appearance of victory into actual victory, and more to do with the replacement of the traditional institution of voting, and all its civil and cultural implications, with a remote process little attuned to the vagaries of campaigns and the substance of issues in the lead-up to election day, election observers say.

“I have never liked extended or mail-in voting. The public ritual of voting is important to me, to show people your support for the act of voting. I also don’t like early voting because it encourages the tribalism in our politics,” Andrew E. Smith, director of the University of New Hampshire Survey Center, told The Epoch Times.

When citizens send in their votes early by mail, Smith pointed out, they typically act on pre-formed party loyalties and affiliations rather than making decisions based on carefully following the news and assessing the state of the economy, diplomatic relations, and other issues on which candidates base their platforms, right up to the date when they would vote in person if they did choose that route.

“When you cast your vote six weeks before an election, you can miss many of the events that come up during the campaign, but you have no chance to reconsider your vote,” Smith continued.

“The Fetterman-Oz debate this year was certainly an example,” he added, referring to the Oct. 25 debate in which Pennsylvania Senate candidate John Fetterman gave a widely criticized performance marked by vague, halting, and sometimes incoherent answers to moderators’ questions and to the arguments of his GOP opponent, Dr. Mehmet Oz.

The timing of the debate came in for criticism because as of the date of the debate, officials had already received 635,428 of the 1,310,189 mail-in ballots that people had requested, according to the U.S. Elections Project.

In agreement on this point is Mark C. Smith, Director of the Center for Political Studies at Cedarville University in Ohio, who noted that the sheer length of time allotted for early voting in Pennsylvania—50 days—made it inevitable that some citizens would make up their minds about the Senate race without having watched the debate and become informed about the extent of Fetterman’s health issues and how far is he from a full recovery from the stroke he suffered in May.

“I find early voting problematic for that reason. I can’t speak for others, but I want to cast a ballot with as much information as possible. Much can happen in 50 days. I always do my best to vote on election day,” Smith said.

Early voting has its proponents, such as David Carlucci, a former New York State Senator who now works as a political consultant, who emphasized what he sees as its role in a fair and transparent electoral process.

“Mail-in voting is necessary for providing all Americans the opportunity to have their voice heard in elections. In-person, single-day voting creates many barriers for workers, lower-income individuals, those lacking transportation, or individuals not in their jurisdiction on election day,” Carlucci said.

“That being said, early voting does extend the counting timeline further than in years past, meaning that we will most likely not know the results on Election Day night. This year, the number of mail-in ballots surpassed those [received] in 2018 [as of] two days before election day,” he conceded.

Carlucci also acknowledged that he does see the possibility of a “red mirage” that may have serious consequences for the political climate and for people’s trust in the electoral system.

“Unfortunately, that is a downside for early voting,” he said.

While acknowledging that mail-in voting is imperfect, Smith said that he does see ways to make the process more secure. Certain localities have helped light the way toward a more transparent and trustworthy system, he suggested.

“Several states, like Georgia and Arkansas, now require voters to provide additional information beyond signatures that can be verified by state authorities,” he said.

Where margins are tight and the final electoral math comes down to a few thousand or a few hundred votes, the suspense is likely to go on and potentially strain the political process. But, in the current midterm elections, Smith predicted that in some states in-person voting will yield margins so large that it will be possible to call the elections safely, on the grounds that the number of mail-in ballots yet to be counted is insufficient to change the outcome.

“This will drain the drama out of some of the situations,” he said.