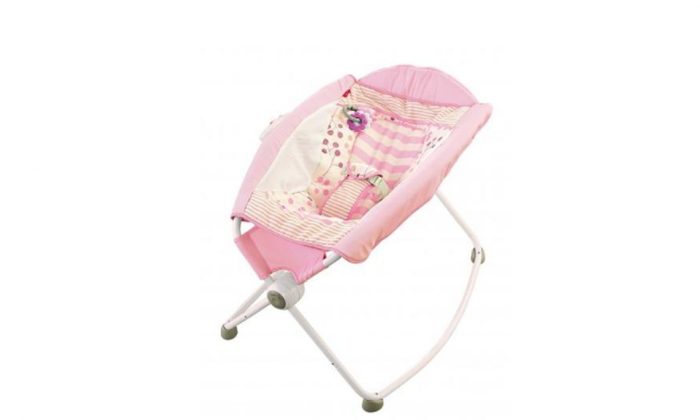 A warning was issued by the U.S. Consumer Product Safety Commission (CPSC) about the Fisher-Price Rock ‘N Play seat after reports of infant deaths. (CPSC)
US News

A warning was issued by the U.S. Consumer Product Safety Commission (CPSC) about the Fisher-Price Rock ‘N Play seat after reports of infant deaths.

The CPSC issued the alert on April 5, saying that death may occur “when infants roll over in the product.” At least one Rock ‘N Play model was manufactured in China.

The agency said it is aware of 10 infant deaths in the Rock ‘N Play since at least 2015.

“After the infants rolled from their back to their stomach or side, while unrestrained,” is when the deaths took place, according to the agency.

The infants were aged 3 months or older.

The CPSC is now advising consumers to stop using the product by three years of age or as soon as the infant is able to roll over.

The agency said it has “has previously warned consumers to use restraints in infant inclined sleep products.”

ATTENTION PARENTS: Fisher-Price has issued a warning after reports of death when infants roll over while using their Rock 'N Play. There have been 10 infant deaths already involved.

Parents are advised to create a safe environment for infants when they are using a crib, play yard, bassinet, or another sleeper.

Meanwhile, parents should not add stuffed toys, pillows, blankets, and other items to the sleeping area as they can pose a hazard, the agency said.

The agency was created to guard the public against risks of injury or death associated with a variety of products.

“Deaths, injuries, and property damage from consumer product incidents cost the nation more than $1 trillion annually. CPSC is committed to protecting consumers and families from products that pose a fire, electrical, chemical or mechanical hazard,” according to the agency.

It issues warnings and recalls to on items like “toys, cribs, power tools, cigarette lighters, and household chemicals,” adding that doing so has led to a decline in overall deaths.

RECALL ALERT: Your avocados may be contaminated🥑🥑

The tests were done as part of a routine government inspection at its packing facility in California, the company said.

The FDA also issued a recall was issued for a brand of baby cough syrup sold by Dollar General stores across the United States.

According to the March 20 notice, the product was found to have the potential for contamination with Bacillus cereus and Bacillus circulans bacteria.

“Bacillus cereus in food products has the potential to produce two forms of gastrointestinal illness, one being a syndrome primarily of vomiting, and the other of diarrhea,” said the agency. “Most often, illnesses are mild and self-limiting, although more serious and even lethal cases have occurred.”